I really wanted to take public transportation today to go on my hike. But, I am on a layover in Seattle and I only have 22 hours at home, those who know me well know that I will be sleeping for about 10-12 hours of that time! :-) So I only have about 10 hours to do my household errands, 1-2 hours is taken up by dressing for work and driving to and from work so I have about 8 hours left to hike for hike-a-thon, do laundry, stop for groceries, etc. I really wanted to take public transportation out to Discovery Park for a hike. So I went online to the King County Metro Transit Trip Planner and I found out that it would cost approximately $3.50 for the bus roundtrip and it would take about 3 hours round trip to get out to the park. Then I went to MapQuest and the AAA fuel cost calculator to figure out what it would take if I drove my car. It would take less than an hour round trip to drive myself and it would only take about 1/2 to 3/4 of a gallon of fuel, so let's say $4.00 would be the cost. And since I was in my own car, I could stop and run errands along the way (the post office, the library, the grocery store) without any added delays waiting for buses. So in the end, instead of taking the bus, I ended up driving out to Discovery Park. Evil, evil, bad, bad, the single car driver clogging up the roads and destroying the environment with my horrible emissions. :-) But now I have time to write up my blog about my hike. 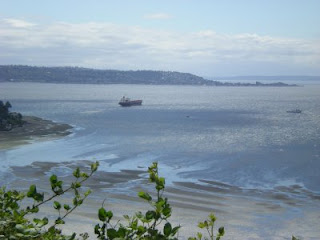 Discovery Park was named for the English explorer Captain George Vancouver's ship, the Discovery. It was originally part of Fort Lawton. Fort Lawton was created by the Army in 1898 and the first troops were assigned to it in 1901. After the Korean War, fort activity declined and most of the fort was declared surplus by the Army. The federal government was allowed to give surplus lands to cities and states to be used for parks and recreation and the lands were transferred to the City of Seattle in 1972. Fort Lawton still exists within the park as headquarters of the U.S. Army Reserve's 70th Regional Readiness Command and a military housing site. Every time I go hiking here, I see lots of boys sporting crewcuts running the trails and today was no exception. :-) 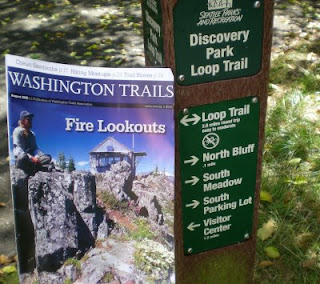 I hiked the 2.8 mile Loop Trail. The highlight of my hike was stumbling across a lost mole. This little guy was making good time shuffling along the trail. I was very worried about him because there were so many dog walkers out and about. I hoped that he would not be eaten by a loose, off lease dog. I don't know what he was doing up above ground and on the gravely trail no less! He was definitely lost. I will continue to worry about him and wonder what happened to him. I hope he found his way off the trail and back underground. 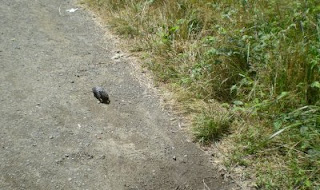 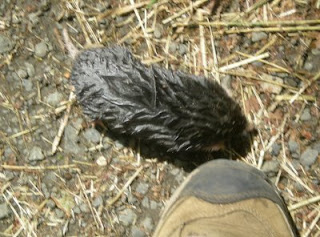 On another subject, last year I lost 10 pounds during the month of August. Primarily this was due to my increased activity level for hike-a-thon. I did not change my eating habits at all. This year, I hope to increase my weight loss to about 15 pounds by combining all my hiking activity with sensible eating. So I DID NOT STOP at the Red Mill for a burger and a shake after my hike at Discovery Park.

This is a HUGE concession on my part. I really, really, really wanted that burger, but instead I am at home eating a sensible salad. I keep telling myself that it will be all worth it when the scale registers me 15 pounds skinnier at the end of the month. :-)

Don't forget that you can contribute to the WTA Hike-a-thon directly on their website this year, no need to mail me a check or wait to see me to hand me cash. They will be happy to take your credit card number over the internet. :-)

Also a big thanks goes to Gollygee, Lisascenic and Robb, and Monkey Mamas for their $25 pledges. Doublesaj and Old Blue are going to have to donate an additional $30 to match their challenge. We need one more letterboxer who has not donated previously to donate at least $25 for another $10 from Doublesaj and Old Blue!
Posted by Amanda from Seattle at 11:04 AM

I feel your pain about public transportation- I would really love to take the bus to work. But because I start my shift very early in the day I can't realistically take the bus and expect to get there in time; they don't run early enough. And to take the bus home in the evening means i have to wait half an hour after my shift to catch it and then another 20 or 25 min. to get down to the transfer station, wait for the next bus and then finally get dropped off 5 blocks from my house. This is a drive i do in 1o minutes. I'd like to ride my bike too, but realistically after being on my feet for 12 hours I just don't have it in me to ride home. (Maybe if the downhill part was on my way home from work instead of to!)
I'll have to stick with carpooling for now- until public pressure sways bus service to get better.

I would also like to take the bus to work and it could be possible, there is an express bus that leaves from my neighborhood and gets on the highway and goes directly to the airport with only a few stops along the way. BUT, it stops running from the airport at 11pm at night. The trips I work and the trips that bring me home nearly always come into SeaTac around midnight or later. The actual scehduled arrival for my one trip is 11:34pm, so I would never be able to make the bus to go home.