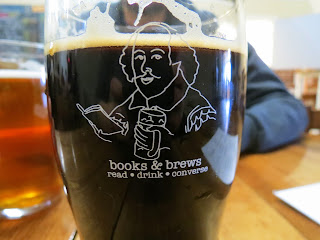 Appointment with Death by Agatha Christie This Christie is set in Petra and they made some really good movies of it, unfortunately they are not set in Petra (Syria and Trieste)
Dragon Teeth by Michael Crichton  part of my paleontology obsession lately. I really enjoyed it. Call it Dances with Wolves with Paleontologists and Wyatt Earp! :-) Short read, it was published after his death and really feels like just the outline of what could have been a more epic book. And the ending was a little abrupt. But all in all very enjoyable and reads like a movie. You can just see them making it into a movie.
The Bell Jar by Sylvia Plath (audiobook) this was read by Maggie Gyllenhaal. I love this book and have read it multiple times at many different times of my life. It was fun to listen to in the car.
The Forgetting River by Doreen Carvajal Carvajal researches her family lineage and finds that when she was always raised Catholic in California, her family line can be traced back to Jews who were forced to renounce their faith during the Inquisition in Spain. So she travels to Spain to  investigate.
Fifth Avenue, 5 a.m. by Sam Wasson  Breakfast at Tiffany's and how it and Audrey Hepburn  effected fashion and the image of the fashionable woman circa 1960's.
The Dutch House by Ann Patchett (library) our neighbors are sharing their library books! I was on the list for this one, but was not able to get it before the shutdown. So I was excited when my neighbor offered it! I enjoyed it. A dysfunctional family drama centered around an odd "dutch house" in Philadelphia area.
Leave Only Footprints by Conor Knighton He visits every National Park in America (in one year) and this is his memoir of that time (with photos)
The Fire Line by Fernanda Santos Story of a wildfire tragedy from 2013 in Arizona
I Spy by Daniel Ribacoff a fun book about how to be your own private investigator
Crazy Salad by Nora Ephron a collect of essays that she wrote about women and being a woman in the 1970's for different magazines
The Mysterious West ed by Tony Hillerman a collection of western themed stories compiled by Tony Hillerman. Very good
Bad Luck and Trouble by Lee Child (audiobook) Action, Jack Reacher book. Fun to listen to in the car while driving thru for fast food!
Unsheltered by Barbara Kingsolver Reminds me a bit of "The Dutch House" because of how a house is almost like another character in the book.
The Boston Girl by Anita Diamant (audiobook) I really enjoyed this one. By the author of The Red Tent. It is about a woman growing up in Boston in the early 1900's (they talk about the Flu Epidemic!!) This was read by Linda Lavin and I thoroughly enjoyed it!!
Masked Prey by John Sandford always a favorite, I heard that he is going to stop writing the books soon, (retire) which is a bummer.
A Memory of Murder by Ray Bradbury a collection of short stories by Ray Bradbury, some of the first that he ever had published. Great if you are a fan and you can see how he evolved over time

Posted by Amanda from Seattle at 10:50 AM No comments:

Postcards 2020 Wrightsville Beach: Surf Bathing some of my oldest postcards

These are two of my oldest postcards from Wrightsville Beach. The first is probably from 1901-1907 It is hard to pin down, because it was never used and there is not a postmark on the back. Being in black and white and not color makes it seem to be an earlier card. The second card is postmarked 1909, so we can be sure of that date. 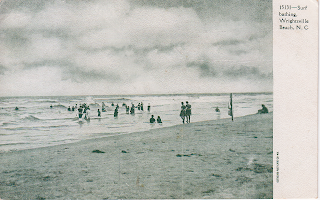 The first picture postcards still had the address alone on one side. If you wanted to write a message it had to be crammed in alongside the picture, around it and sometimes over it. This is why this card has blank white space to the right of the picture. The back of the postcard does not have a line down the middle, no messages were allowed on the back, only the address. Divided back postcards started in 1907, the card below has a divided back and the postmark of 1909. 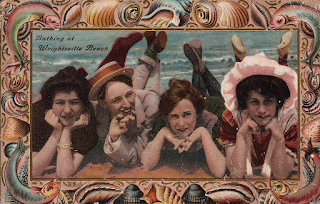 Posted by Amanda from Seattle at 10:49 AM No comments: 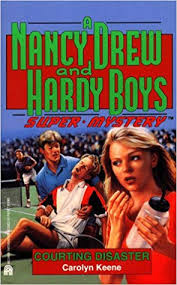 
This book starts without a hint of mystery. Bess and Nancy are invited to the Southern EXPOsure Festival in Charleston, SC by Kurt Zimmer, an old family friend of the Marvins.  Kurt is directing a rock musical, called Beauty and the Beat and starring a former child star, now a video deejay, named Terry Alford.  Terry immediately starts getting threats to leave the show and there is some sabotage to the theater as well, so Nancy Drew is on the case to protect Terry and find out who is responsible.
By coincidence, Terry is dating tennis professional "bad boy" Pat Flynn. Pat is playing in a exhibition match at nearby McCallum Island resort. Pat has been getting threats as well and the organizer of the exhibition tour has asked the Hardy Boys to protect Pat. Standard Super Mystery script of threats and sabotage.
This author had a fixation with height. We learn that Nancy Drew is 5'7", and 3 inches taller than Bess. Terry Alford is petite, barely 5'2" and Alan Lassiter, Pat's tennis rival is a gangly 6'4". I kept waiting for height to play some role in the mystery, but that never materialized.
There is a little bit of local Charleston, SC color sprinkled into the story.  They visit a restaurant on Shem Creek and walk along King Street and the Battery. They attend a garden party at a plantation along the Ashley River. All of the references could easily be written by someone who had never been to Charleston, SC.
At one point, Frank and Joe Hardy are actually fired from their case by the head of the Tennis Exhibition Tour. Pat Flynn does ask them to stay on as his bodyguards and he will pay them. Pat has a terrible temper and is very unlikable. The Hardys don't even like him, but they want to solve the mystery. I was very unhappy with the denouement of Pat Flynn's story line at the end. It seemed ludicrous to me and was contradictory to things that had happened earlier in the book.
The cliffhangers that ended every chapter got very annoying in my opinion. And some of the red herrings, were not so far off the mark. Many persons who were suspects did actually cause harm and make threats even if at the end, they were not the main villain.  All in all, another disappointing super mystery, not because Nancy Drew was not depicted well, but because of the lame story line and mystery.
Posted by Amanda from Seattle at 9:39 AM No comments:

I just love the nighttime scenes on old postcards. Neither of these cards were ever mailed

Posted by Amanda from Seattle at 10:40 AM No comments: 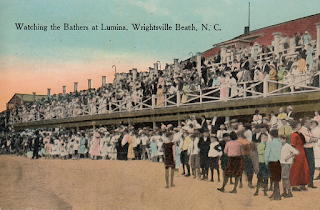 This postcard is from 1916....the message on the back says " Dear Edward, I am having a very nice time, I came down on excursion from Wilson. Wise says hello  Wellford" 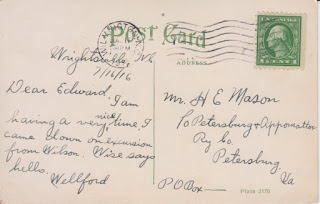 Lumina, “Beautiful Place of Lights”, had a three level pavilion constructed by Consolidated Light and Power Co. for games and entertainment. It's magnificent ballroom had the first scientifically designed band shell on the east coast. It became known as the “Showplace of the Atlantic”.  Virtually every “big band” era band played there.  The last Big Band to perform at Lumina was Vaughn Monroe in early 1952.  Sadly, Lumina was demolished in 1973.
Posted by Amanda from Seattle at 10:30 AM No comments: 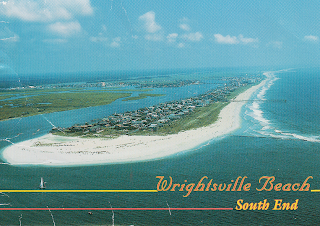 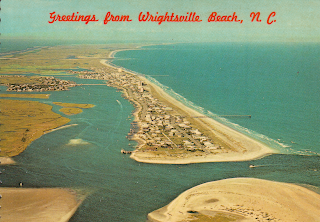 Two views of the South End of Wrightsville Beach from the 1970's
Posted by Amanda from Seattle at 10:30 AM No comments: