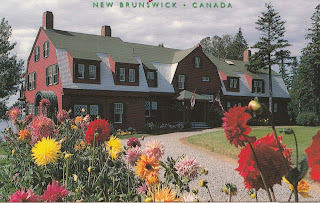 Campobello Island is a lovely place in New Brunswick, Canada. It is attached to the United States by a bridge at the easternmost tip of Maine. Franklin D. Roosevelt had a summer home on the island and it is now a wonderful park and museum. I went there with my Granny in 1994.
Posted by Amanda from Seattle at 6:30 AM No comments: 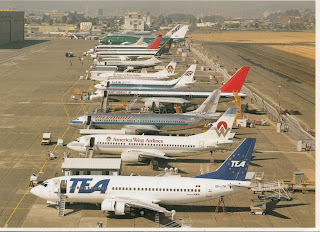 This is a postcard of Seattle's Boeing Field with the brand new airplanes lined up and ready for delivery to their airlines. Notice the America West and Piedmont planes lined up side by side!! gotta be early 80's.
Posted by Amanda from Seattle at 6:30 AM 4 comments: 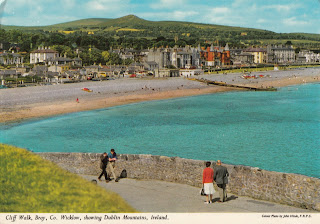 Happy St. Patrick's Day and here is a "wild card" from Ireland! I was on a homestay in Bray in 1986. I just last year reconnected with my host family who are now living in Scotland! Shout out to Barry, Derek and Lana Lord! Hope to be seeing more of you guys in 2011 and beyond. This was another wonderful educational opportunity. I highly recommend it for high school age children.
Posted by Amanda from Seattle at 6:40 AM 2 comments: 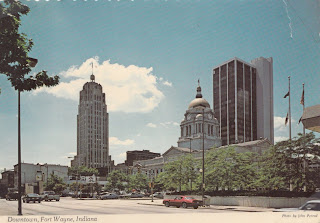 This is downtown Fort Wayne, IN. This postcard is from my Grandmother Arkebauer, written to me in 1982 when I was away at an academic summer camp. My Grandmother Arkebauer lived in Fort Wayne and I didn't get to see her as often as my Granny Knox who lived in North Carolina where I grew up. I was at the Governor's School of North Carolina for the summer and it was a great honor and opportunity, but when you are 15 years old, you aren't really thinking about your future, you are more likely thinking about the cute boys that you can meet at Governor's School. I attended at a small college in the middle of nowhere (Laurinburg) NC. And it was very exciting to receive mail. Obviously, I kept this postcard from that time in my life. I must say that looking back, even though I was only interested in meeting boys, Governor's School did a lot to prepare me for college and I made a lot of great friends there.
Posted by Amanda from Seattle at 6:30 AM 1 comment: 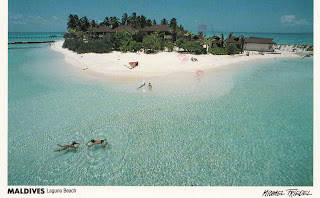 Extra points to all you folks who can point to the Maldives on a map. I didn't know where it was until my Dad started flying there. He would have 4 day layovers in paradise. Definitely on the bucket list of places to visit!

You can now subscribe to my blog. You'll get an email each time it is updated with a new post.

Posted by Amanda from Seattle at 6:30 AM 4 comments: 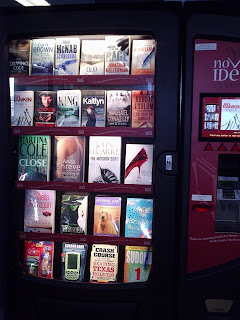 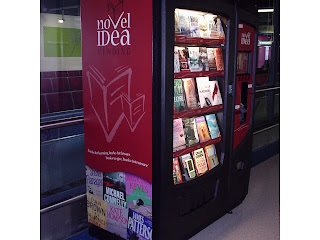 These pictures are of a book vending machine!! How cool is that??!! This is at an airport in Europe.

Folks were asking WHEN do I read? I commute to work from Seattle to Philadelphia. The flights are usually around 5 hours or so give or take. Plus with getting to the airport an hour prior and getting into Philadelphia several hours prior to when I actually go to work, I have lots of downtime to read. I ALWAYS have a book with me. I cannot sit and wait without something to read. Doctor's office, getting on oil change, waiting for a friend at a restaurant etc. And when I am not wasting time on facebook or watching reality tv....it's the season for Amazing Race and America's Next Top Model, not to mention Survivor!!!, when I am not wasting my time watching tv (usually catching up after the fact online--thank goodness for CBS.com), I am usually reading. And I will definitely reread books that I have enjoyed. Especially if it has been 10 years or more since I read them....for example, in February, I reread 1984. I had not read it since high school/ college.

Primal Threat by Earl Emerson
1984 by George Orwell
Great Son by Edna Ferber library
The Art of Racing in the Rain by Garth Stein
Ordinary Thunderstorms by William Boyd library
The Sorrows of Young Werther by Johann Wolfgang Von Goethe library
Running Dream by Wendelin Van Draanen
Murder in the Marketplace by Lora Roberts
Loitering with Intent by Stuart Woods library
Anne of Avonlea by L. M. Montgomery
Norwood by Charles Portis
The Wild Cat Crime by Carolyn Keene
Pit of Vipers by Carolyn Keene
What the Dog Saw by Malcolm Gladwell library
Christmas Mourning by Margaret Maron library
The Tinder Box by Minette Walters library
Anne of the Island by L. M. Montgomery
The Known World by Edward P. Jones
How Evan Broke His Head and other secrets by Garth Stein library
The Confession by John Grisham library
Never Let Me Go by Kazuo Ishiguro library


I loved The Art of Racing in the Rain by Garth Stein and will be looking for other books that he has written.
Edna Ferber wrote Giant and Showboat. Great Son is about a Seattle family, found this book while just cruising thru a local used book store. Lots of interesting Seattle history from pre-WWII
Ordinary Thunderstorms was pretty entertaining. It is a fictional thriller that might give you a different view of homelessness! It inspired me to reread the Lora Roberts mysteries, her protagonist was homeless in the first book in this series (Murder in a Nice Neighborhood)
The Carolyn Keene books are Nancy Drew books I was reading and thinking about writing an article about for one of the fanzine's
Never Let Me Go has been made into a movie with Keira Knightly. I got into a rant last year because I read The Unit by Ninni Holmqvist and got it confused with Never Let Me Go because they do have similiar themes. (I will say that I prefered The Unit) The Unit revolved around a 50 year old woman and I was going off because I thought they had Keira Knightly doing this role..changed the whole thing for younger actors etc. Turns out, I was thinking of the wrong book. :-)
PS Here is my RANT:


"The Unit is being made into a movie as we speak. I am not too happy about this and i will tell you why. The book was wonderful I enjoyed it immensely. The synopsis is that once you reach the age of 50, if you have not reproduced and if you do not have a job that is deemed indispensable then you are sent to the UNIT and you are used as a lab rat for tests and your organs are farmed out to people who are more worthy..until you make the final sacrifice and donate your heart or lungs etc. (*In Never Let Me Go,the people being farmed for organs are clones, created for this purpose) It seems that artists are not deemed worthy and most of the folks in the UNIT are artists, writers, store clerks, film critics and librarians etc.
I am not happy about the movie because I heard it is starring Keira Knightly and some other 20-somethings. OKAY. This is a novel about how you are not worthy if you live your life without procreating. I don't know how they are going to change it so that the 20 year olds are sent to the Unit. But the book was awesome in that it made you question your choices in life and the decisions that you make. To have a child or not,
what kind of career you pursue etc etc."

*I added this info so you would know the differences between the books
Again, I preferred The Unit by Ninni Holmqvist. Maybe I could emphasize better with the 50 year olds than with the school children of Never Let Me Go.

Ryan and I both just finished The Confession by Grisham and were pretty underwhelmed. Grisham's books were so great in the beginning because there was a lot of action and things just moved! Now they are sort of slow and this one for me just never zipped along. I could barely care about the characters.