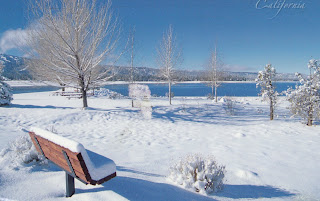 Another card from Ryan when he was on his PCT hike. We were often away from each other for weeks at a time and I loved getting postcards from him. He thought he had a lot of snow on the trail in 2010, and there was even more snow this spring! And they have already had snow this winter season as well!!
Posted by Amanda from Seattle at 6:30 AM No comments: 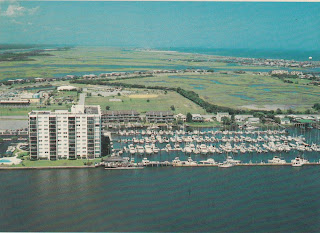 Happy Thanksgiving. This postcard shows one of the houses that I lived in growing up! In this postcard, you can see my Dad's boat on the first dock at Seapath Marina! I had a terrific childhood in North Carolina and I will always be thankful for that.
Posted by Amanda from Seattle at 6:00 AM 1 comment: 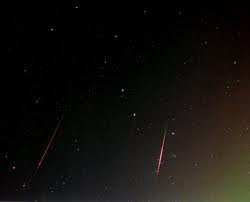 One of my favorite perks of my job is the ability to view meteor showers, comets and the northern lights from 35,000 feet! Just this past week, I was able to get an awesome view of the Leonid Meteor Shower. And I will never forget the times I was able to see the Hale-Bopp comet while flying cross-country. 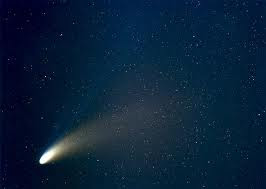 The Leonids are associated with the Tempel-Tuttle comet. They get their name because they appear to radiate from the constellation Leo. I was working a redeye flight across the country from Los Angeles to Philadelphia the other night and it was prime viewing time for the Leonids. The Northern Lights are another phenomenon that I really enjoy and living in the continental USA, you usually don't get the opportunity to see them that often, but when you are at 35,000 feet at night, you can get glimpses of stuff that folks on the ground might not be aware of! 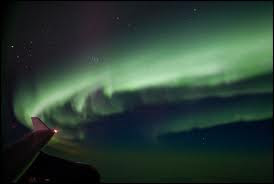 Posted by Amanda from Seattle at 3:06 PM 3 comments: 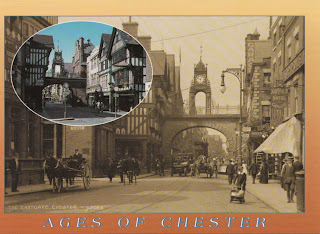 When I got stuck in Manchester in April 2010, during the whole volcano ash incident, I was able to visit this lovely town in England. The city was originally founded by the Romans and it is one of the best preserved walled cities in the British Isles. Plus another of those Now and Then photos that I enjoy!
Posted by Amanda from Seattle at 6:30 AM No comments: 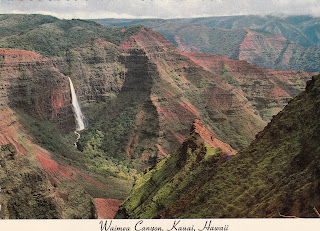 The year is 1978 and my parents and my sister and I traveled to Kauai, Hawaii. It was awesome.
I was 12 years old and my previous knowledge of Hawaii was from the Brady Bunch episode where they are cursed by the Tiki and Nancy Drew's adventures finding the Secret of the Golden Pavilion! It was so exotic, it delivered on all my expectations!
Posted by Amanda from Seattle at 6:30 AM 4 comments: 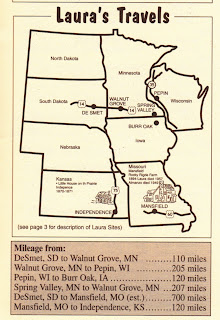 As promised, I am blogging about Little House on the Prairie today! Last month, I read The Wilder Life by Wendy McClure about her travels to all the Laura Ingalls Wilder sites around the midwest. I was very excited about this book because I had been to those places too! In 1997, I took my Granny on a trip along Highway 14, The Laura Ingalls Wilder Highway across Wisconsin, Minnesota and South Dakota to see the places depicted in the Little House books. 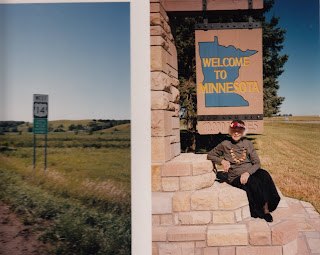 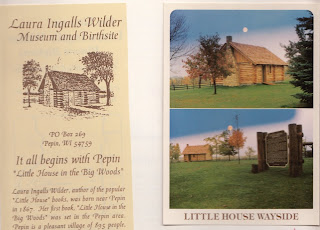 Our first stop was Pepin, WI and the site of" The Little House in the Big Woods". The woods are no longer there!! Everything must have been cut down long ago. I always imagined a "Black Forest" style forest, but it looks awfully a lot like prairie here now. And the cabin is only a replica.

We stopped to pick up rocks along Lake Pepin just like they do in the books! And Wendy McClure did it too in her travels. 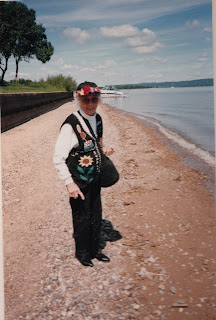 Next stop was Walnut Grove, MN and "On the Banks of Plum Creek". Not much to see here now, but the town does a Wilder Pageant and a Pioneer Festival every year in July. Walnut Grove gets a lot of visitors because of the 70's TV Show starring Melissa Gilbert and Michael Landon. In the book, Walnut Grove is not even mentioned. Supposedly Laura explained, "At the time, I did not realize I was writing history." 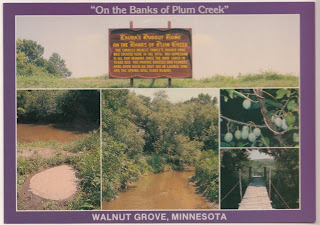 Our last stop was DeSmet, South Dakota and the site of "Little Town on the Prairie". They have a Pageant that is held every year during the last weekend in June through the first two weekends in July. The Ingalls lived in the surveyor's house as depicted in "The Long Winter". At the Homestead site, there are 5 cottonwood trees that were originally planted by Charles Ingalls. One is in the foreground of this postcard photo! 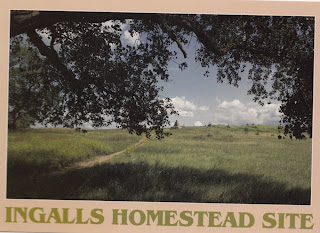 Laura lived on this homestead from age 13-18 and it was in DeSmet that Laura met and married Almanzo Wilder. The homestead that she and Almanzo established (in the book "The First Four Years") is just 1.4 miles North of DeSmet and a historical marker there honors Rose Wilder Lane, their daughter. 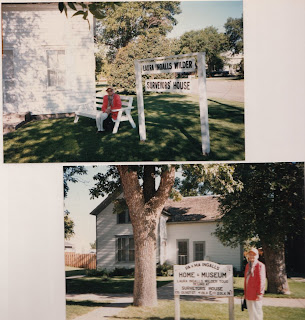 My Granny and I had a wonderful time visiting all these places and I highly recommend it as a family vacation destination! We flew in and out of Minneapolis, MN and had a rental car and stayed in Bed and Breakfasts the whole time, but there are also lots of camping options as well, and motels like Super 8 and Days Inn along the way.
When I would take my Granny on vacation, I would create a scrapbook for her with all the photos and postcards and brochures that we picked up along the way. So that is how I have all this information at my fingertips today. We did the trip in August and missed all the pageants. I had a book called Laura Ingalls Wilder Country by William Anderson to help me plan the trip.
Posted by Amanda from Seattle at 6:50 AM 1 comment: 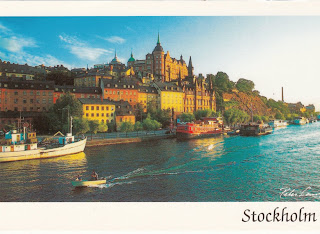 Oh, how I love this place. I was flying here in 2009 and didn't know how lucky I was and we stopped serving Stockholm. I would love to go back sometime and spend a lot more time exploring this wonderful country.
Posted by Amanda from Seattle at 6:30 AM No comments: 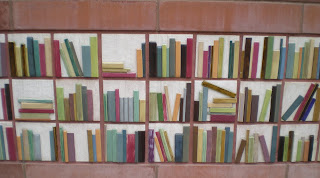 This photo is of a piece of art in front of the Denver Public Library. Did not have a ton of time for reading in October. We spent a good portion of our time painting and remodeling the new condo and moving, so I often would collapse in bed too exhausted to even pick up a book.

Here are the books I read in October:


A Wild Surge of Guilty Passion is a fictionalized account of the true life murder that was the inspiration for Double Indemnity (book and movie) and The Postman Always Rings Twice (book and movie). I enjoyed it quite a lot!

The Gardener Heist is about the theft of $500 million worth of artwork from the Isabella Stewart Gardner Museum in Boston in 1990. I have visited the museum and seen the empty frames where the artwork used to be. So I was very interested in this story.

Mule is about a man who is hit hard by the recession and becomes a drug trafficker to make ends meet. If you like the Showtime series Weeds, then you ought to check out this book. It is very much about a guy who is "NOT A DRUG DEALER" getting involved in the drug trade and finding out that he has a talent for it.

Fear Less by Gavin De Becker. (His book the Gift of Fear is really great.) Fear Less focuses on the fears of terrorism after 9/11. Many people rarely see the effects of 9/11 on our world, or don't even notice them so much. But it totally affected my job and my life, so I found this interesting.

The Silent Land by Graham Joyce, can't wait to read more by this author. This was a creepy surrealistic book about a couple who are trapped in an avalanche, and how they survive. Very good and Stephen King recommends another book by this author called Indigo, so that one is on my TBR list now too.

The Boys of My Youth by JoAnn Beard, I read her "InZanesville" last month and loved it. So I am now reading everything that she has written. This is a collection of autobiographical essays and once again, I was sad to see it come to an end. I could read her stuff all day long.

Garnet Hill is a mystery/psychological thriller set in Glasgow, Scotland. A woman having an affair with a therapist (but not her therapist) finds him dead in her apartment and she is a suspect in the murder. Kind of dark, the characters are not cracking many jokes in this one, but an enjoyable read if you like this kind of thing...fans of Minette Walters, Kate Atkinson etc. might want to try Denise Mina.

Long Gone is a thriller much like the movie starring Liam Neeson, "Unknown". A girl finds a perfect job in an art gallery and one day comes in to find a body. It turns out that everything she thought about her life was a lie. The art gallery, her boss, it was all a set up for this murder....I quite enjoyed it.

Iron House is a thriller by John Hart, he was recommended to me. And it was pretty good, but I did not like the female characters. I was very annoyed by one of them and hoped that she would be killed off, so I did not have to read about her spineless whining anymore. I don't know if I will read any more by him, perhaps I will give him a chance at a later date.

Heart of the Matter is a chick-lit book by Emily Giffin. She has a huge fan base and authored Something Borrowed, which was made into a movie. This one is a look at infidelity in a marriage, it was okay.

I loved the Wilder Life and I might just have to devote an entire blog entry to it! McClure traces her journeys to visit the Laura Ingalls Wilder tourist sights around the country and talks about her fascination and love for the books (and the TV show). Since I dragged my granny to see the sights along the Laura Ingalls Wilder Highway across Wisconsin, Minnesota and South Dakota, I was very familiar with much of the book. If you are a Laura Ingalls Wilder fan, don't miss this one!!

The Girl who Fell from the Sky was a book about a bi-racial girl who is abandoned by her (black) father when her (white) mother commits suicide. She is sent to live with her paternal grandmother in Portland, OR. I enjoyed this look at the bi-racial experience.

Malled is about the retail life much like "Nickel and Dimed: On (Not) Getting By in America" by Barbara Ehrenreich. Caitlin Kelly also had a lot of information from Paco Underhill, the author of "Why We Buy: the science of shopping". I used to work retail and what I do now is not that much different from retail. I always like this subject matter.

The Lying Game: I said that I was not going to read another Sara Shepard, Pretty Little Liars book, but this is a stand alone title about a twin who is murdered and the twin who takes over her life. Sounds a lot like a certain Sarah Michelle Geller TV show called Ringer that is currently airing.

Only 14 books read in October.