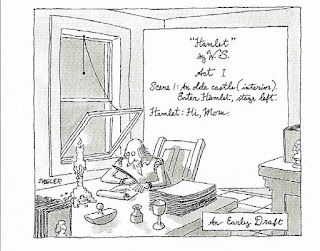 Bellweather by Connie Willis very enjoyable book about an academic professor studying Trends, like the hula hoop or pet rock etc. Why do things become trends? fiction
Elephants Can Remember by Agatha Christie this book references two previous books where Poirot solves a mystery by delving into the past. 5 Little Pigs and Murder in Retrospect. And again he interviews people about a mystery that is a decade old.
No One Goes Alone by Erik Larson (audiobook, library) a ghost story, listened to it over Halloween!
Cat Among the Pigeons by Agatha Christie This one is a murder set at an exclusive girls boarding school.
An Elderly Lady Must Not Be Crossed by Helene Tursten (library) I really enjoyed the first book (An Elderly Lady Is Up to No Good) and this one is just as much fun.
Hickory Dickory Dock by Agatha Christie (library) set in a youth hostel with kleptomania and smuggling as the crime and then MURDER
The Pale Horse by Agatha Christie the one with the witches
The Mirror Crack'd by Agatha Christie when you read so many of these, you start to see similarities...so many of the mysteries have an element from the past, a crime in the past that has be be solved that lead to the crime in the present.
DA by Connie Willis (library) fun little novella about a student being shanghaied into a program that they are not interested in
The Golden Ball and other stories by Agatha Christie (library) reading these stories from the 1920-30's and you can see how some of the themes and ideas were later made into full books.
A Place Called Freedom by Ken Follet fun departure from dealing with Agatha Christie and reminds me of an Outlander type story of folks from Scotland seeking freedom in America/the new world!
At Bertram's Hotel by Agatha Christie (library) this is one of my favorite Christies and it is for the nostalgia of it. It came out in 1965 and she was already writing about days that were long past as far as the "golden age" of travel and hospitality etc.
Postern of Fate by Agatha Christie (library) The last Tommy and Tuppence Mystery
The Gate House by Nelson Demille (audiobook) I read the Gold Coast many years ago and barely remembered it, this is the sequel and it was just so-so. I listen to these books in my car when I drive to and from work and around town, I actually was half way thru the book and thought I was listening to the same things over and over!! LOL I had to double check which CD I had put in the player. UGH Do not recommend
Very Cold People by Sarah Manguso (library) a memoir feel very much like Olive Kitterage, but a young girl growing up in Massachusetts.
Passenger to Frankfurt by Agatha Christie (library) what I really love about this one is the note by the author at the beginning about how she gets her ideas! Brilliant.
The Big Con by David Maurer (library) very fun book about grifters written many years ago and could have been the basis for the movie The Sting. (there was a lawsuit)
I still have over 12 Agatha Christie books yet to read to finish her entire mystery realm (I did not read her romances or the autobiography or the book about archaeology)  I don't know if  I will be able to fit them all in during the month of December.
Posted by Amanda from Seattle at 2:37 PM No comments:

Postcards from airports in Virginia 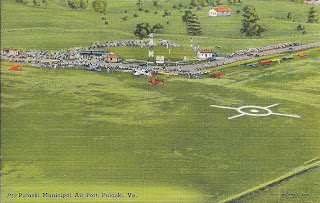 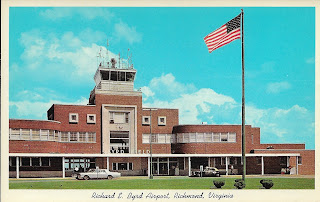 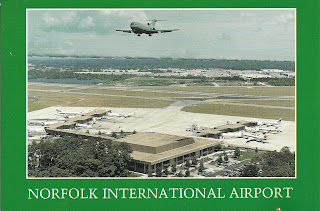 The Postcard above is special to me because that is a Piedmont Airplane flying in and also because I was in Norfolk, flying a Piedmont plane on the day that we changed over to USAir during that merger. 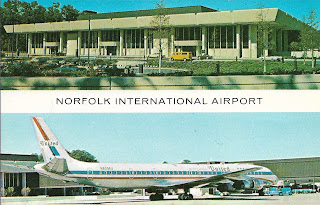 Posted by Amanda from Seattle at 6:34 PM No comments: 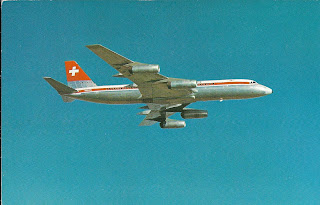 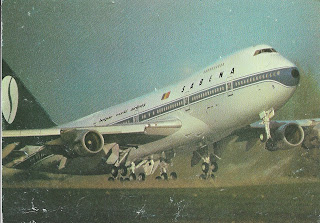 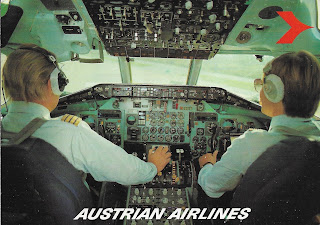 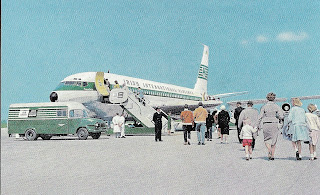 Posted by Amanda from Seattle at 6:32 PM No comments: 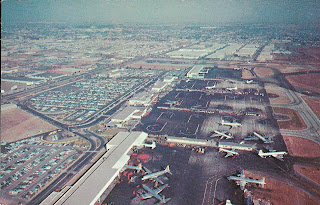 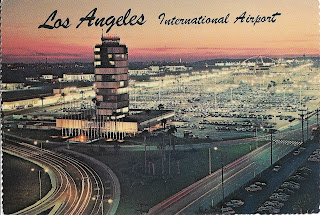 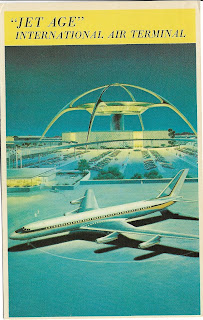 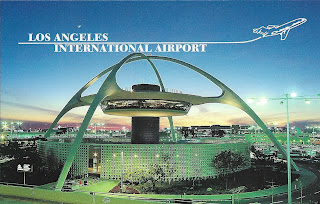 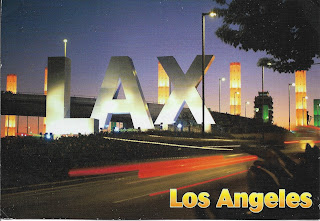 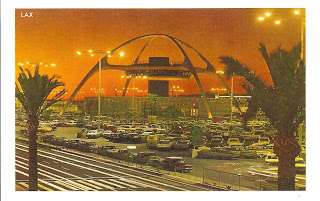 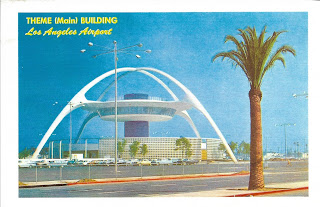 Posted by Amanda from Seattle at 6:28 PM No comments: 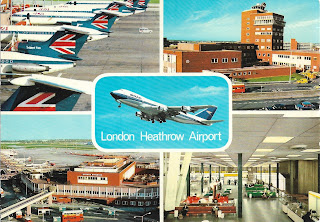 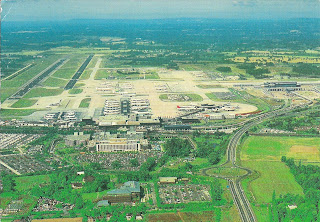 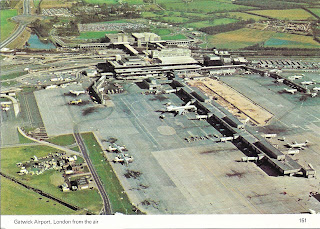 Gatwick
Posted by Amanda from Seattle at 6:26 PM No comments: 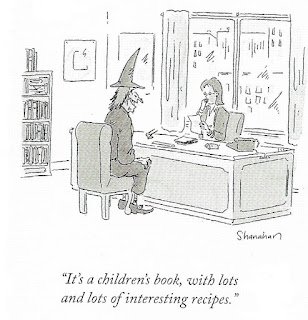 Three Blind Mice by Agatha Christie (library) stories. The Three Blind Mice story was the basis for the play Mousetrap. Which I wasn't thinking about, but as I was reading it, I could totally see it on stage. Then boom I realized, duh this is the one that inspired the play.
Murder is Announced by Agatha Christie (library) A Miss Marple, which I enjoyed. I liked how she just explained how everything was a reminder of stuff from small town life. And I liked how the Police were so thoughtful of her and took her advice and wanted to protect her.
Persuasion by Jane Austin (audiobook) not my favorite Austin. Reinforced by listening to it.
Mrs. McGinty's Dead by Agatha Christie (library) In this one, Poirot is sooo fastidious. It really is almost comic relief how he is concerned about his meals and cleanliness.
The Death of Mrs. Westaway by Ruth Ware (library) I enjoyed this thriller about a tarot card reader who finds out that she may be heir to a fortune.
The Cork Boat by John Pollack  Fun, fun book a true story about a guy who builds a boat out of wine corks. He eventually rows/sails it down the Douro River in Portugal!
In the Shadow of the Mountain by Silvia Vasquez-Lavado (library) If you liked Wild, you will probably like this. It is the story of a lady from Peru, who overcame abuse to climb Mount Everest and now she helps others do the same thing. I liked it better than Wild really.
Destination Unknown by Agatha Christie not so much a murder mystery as a spy thriller.
A Talent for Murder by Andrew Wilson (library) so this book has Agatha Christie as a character. It reimagines her disappearance as a blackmail scheme to have her commit a murder.
The Iron Giant by Ted Hughes (library) He wrote this story after Sylvia Plath died.
The Underdog and other stories by Agatha Christie (library) such great vocabulary words in all her books really, but here are some from these stories: maladroit, quiescent, perturbation, stentorian, felicitate, and irradiated.
The Lying Tongue by Andrew Wilson (library) interesting thriller set in Venice. Lots of great atmosphere
By the Pricking of My Thumbs by Agatha Christie another Tommy and Tuppence one (I love these) and this one is one of my all time favorites.
Halloween Party by Agatha Christie I love it when Poirot is paired with Ariadne Oliver. This is supposedly going to be the basis of the next Kenneth Branagh Poirot film.
Murder with Mirrors by Agatha Christie (I am getting kind of frantic to finish all the Christies before the end of the year. I have so many yet to read!!)  This one all hinges on Carrie Louise and why would anyone want to murder her?
They Came to Baghdad by Agatha Christie I was kind of dreading reading this one as I just read it a year or two ago and I thought I did not like it then, but on rereading now, after reading so many Christies, I liked it! I thought it was a fun thriller with a fun heroine.
Olive Again by Elizabeth Strout (library) The sequel to Olive Kitterage
Posted by Amanda from Seattle at 2:34 PM No comments: