As many of you already know, I collect children's series books. Specifically, Nancy Drew books and older books from the 30's thru the 1950's and 60's. But I also like to keep up with current children's books from Lemony Snicket to Harry Potter and one of my favorites is The Sammy Keyes mysteries. Wendelin Van Draanen is the author of these books and they follow the misadventures of Sammy as she solves mysteries around her hometown of Santa Martina. The place names and landmarks in Santa Martina seemed awfully familiar to me and I noticed the resemblence to areas around San Luis Obispo, CA. It's no mystery, because Wendelin Van Draanen lives in the area and based Santa Martina on the real city of Santa Maria, California. Other fictional cities frequently mentioned in the books are Santa Luisa (San Luis Obispo), and Sisquane (Sisquoc). The city of Pomloc is also mentioned once, a reference to the city of Lompoc. Ryan and I are often down in San Luis Obispo, CA visiting his family and I have been on the lookout to see if Wendelin Van Draanen does any book signings in the local bookstores.

Well, one day Ryan flew down to San Luis Obispo without me and I get a phone call from him later that day about the adventure he had on his flight. It seems he was sitting next to this woman on the plane who WRITES CHILDREN'S BOOKS!! He wondered if I had ever heard of her! Duh! I was jumping up and down in my seat with excitement. So did you get me an autograph? No, of course not, but he had her email address. It seems they talked about Ryan and his website more than they did about Sammy Keyes books and exchanged email addresses when the flight was over. So being the good boyfriend he is and hoping to redeem himself after failing to get an autograph the first time, Ryan emailed Wendelin Van Draanen and she ended up sending me an autographed copy of one of her books! Hurray! 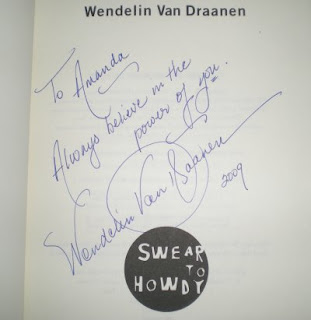 For more information about Wendelin Van Draanen, Sammy Keyes and her other books, you can visit her website:

http://www.randomhouse.com/kids/vandraanen/sammykeyes
Posted by Amanda from Seattle at 11:14 AM 9 comments: