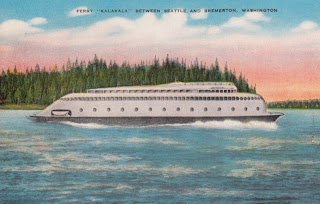 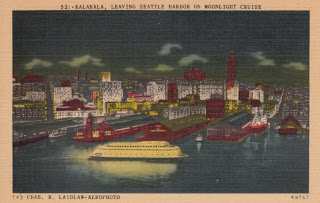 These are some of my favorite postcards of the Kalakala ferry boat in Seattle, WA circa 1935. The Kalakala was the World's First Streamlined Vessel and postcards circulated around the country, along with news reels, and newspaper and magazine stories. She became an international sensation. In a 1963 poll, Seattle World's Fair visitors voted the Kalakala the second biggest attraction after the Space Needle!

Posted by Amanda from Seattle at 11:13 AM No comments: 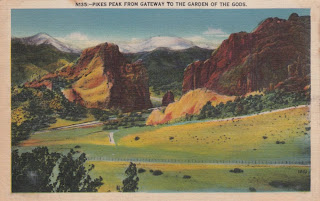 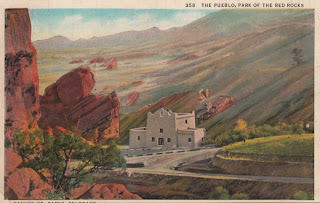 These postcards are from 1938 of Colorado Pikes Peak and Red Rocks. It says that the pueblo was built to match the area at the park of the Red Rocks and serves as a museum, curio shop and refreshment stand.
Posted by Amanda from Seattle at 9:25 AM No comments: 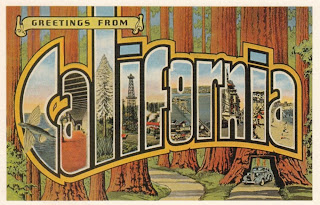 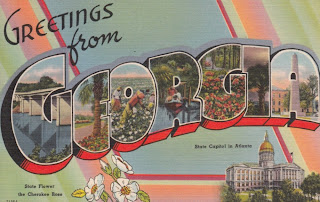 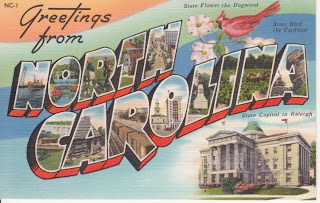 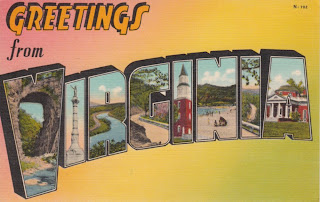 I love the Large Letter Postcards. These cards evolved from turn-of-the-cenury greeting cards with black and white images of women's faces that spelled out a woman's name or the year. The use of views of a city or town were next in the evolution of the postcard. The large letters spelling out the name of the city or town were usually preceded with "Greetings from . . ."

The first large letter postcards date from about 1901 and they were of black and white photo montages or hand-drawn images in the letters against a black background. Large letter postcards reached their peak in popularity during the 1930's and 40's. Actual photographic images began to appear in the backgrounds. The cards from the 1950's are the most colorful.

I want to collect one of each of the 50 states and believe it or not, I still have a long way to go!
Posted by Amanda from Seattle at 6:16 PM No comments: 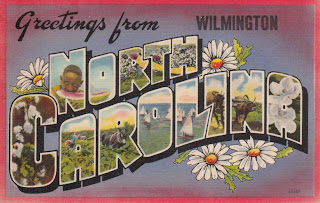 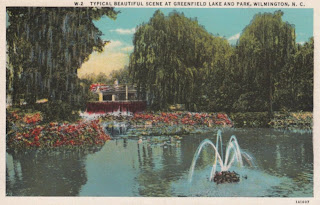 More postcards from where I grew up. A Large Letter Postcard from Wilmington, NC  and below it, we have Greenfield Lake in Wilmington, famous for their azaleas.
Posted by Amanda from Seattle at 9:23 PM 1 comment: 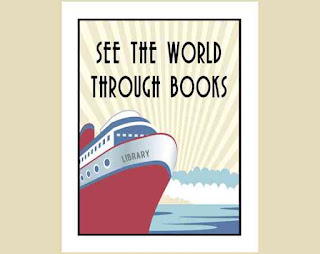 Books I read in April

Cape Fear by John D MacDonald the book that the movie was based on aka The Executioners
Last Train to Paradise by Les Standiford the story of Flagler and the railroad to key west --bought this one on vacation in the keys and very much enjoyed it
In the Garden of Beasts by Eric Larson (library) I enjoyed it although Ryan thought I might find it dry I actually liked it better than Devil in the White City
Good Kids by Benjamin Nugent (library) quite enjoyed
Free Fall in Crimson by John D MacDonald ballooning, the movie business alot going on in this one
The Wee Free Men by Terry Pratchett (library)  YA fun, very Lemony Snicket/Harry Potter fantasy
The Carrie Diaries by Candance Bushnell (library) cute, I was watching the series on TV and thought I'd try the book
The Garner Files by James Garner (library) autobiography and I am a James Garner fan
Making Habits, Breaking Habits by Jeremy Dean (library) trying to make new habits (exercising and eating right)
We live in Water by Jess Walter (library) short stories awesome, the same author that wrote Beautiful Ruins. Great stuff
Cinnamon Skin by John D. MacDonald I just read this one a couple of months ago...but I am rereading the books in order and had to do it again :-) which is fine with me because this is one of my favorite Travis McGee books
The Lonely Silver Rain by John D MacDonald
The Boy by Lara Santoro (library) Mom has affair with her neighbor's son--poignant
Life after Life by Jill McCorkle (library) wonderful, love her stuff
Above All Things by Tanis Rideout (library) great, about George Mallory and his climb of Everest -- a fictional account, I very much enjoyed it and highly recommend it
Speaking From Among the Bones by Alan Bradley the latest Favia de Luce book and I LOVE these!!
Killing Them Softly by George V. Higgins This was originally titled as Cogan's Trade and I read it YEARS ago!! But the recent Brad Pitt movie was based on this book and it was rereleased as Killing Them Softly. A passenger on the airplane gave me this book after he was finished with it. I noticed he had it and had started a conversation with him about the book and the movie.
The Gilly Salt Sisters by Tiffany Baker
Catalogue of Death by Jo Dereske a Miss Zukas librarian mystery I always enjoy these
Unfinished Portrait by Agatha Christie writing as Mary Westmacott this is a gothic romance by Christie that she had published under the name Mary Westmacott --she only did 6 of these

20 books read this month
Posted by Amanda from Seattle at 12:10 PM No comments: