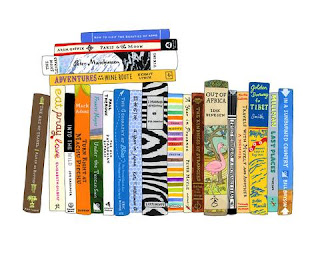 Heavens on Earth by Michael Shermer (library) The scientific search for the afterlife, immortality and utopia. Very interesting.
Think Pink by Lynn Peril Female stereotypes examined from the 1940's to today, the messages that advertising and society send to us about what it is to be a girl or a woman. Very interesting and I highly recommend.
Dirt Music by Tim Winton I got this book because it was an Australian author and I was traveling to Australia this month. I really enjoyed it. Family Melodrama.
Rat Race by Dick Francis I am rereading this one, it is interesting because the protagonist is a pilot who flies the jockeys and owners/trainers to the races. Basic Dick Francis racing mystery otherwise.
The Mysterious North ed. by Dana Stabenow a collection of short stories set in Alaska. loved it
A Town Like Alice by Nevil Shute I do not know why I did not read this book earlier in my life. Really enjoyed it!!I read On the Beach years ago. I liked this one a lot better. About a couple who survive WWII in the Pacific and then set out to find each other after the war is over. Set mainly in the South Pacific and Australia, even though the main girl character is English.
Not Coming Home to You by Lawrence Block claims to be the book that the movie The Badlands was based on...The Charles Starkweather and Caril Ann Fugate, teenage lovers whose 1958 murder spree across the Nebraska plains made national headlines, story. Fictionalized (Block calls them Jimmie John Hall and Betty Dienhardt.)
Bad Blood by John Sandford rereading one of the Virgil Flowers books, this is the one about the religious cult that was abusing children. I read these on the airplane on big trips so that when I finish them, I can just leave them behind on the plane or in hostels, little free libraries etc.
White Houses by Amy Bloom  (library) about Eleanor Roosevelt and Lorena Hickok. A fictional account, but fascinating none the less
Murder on the Orient Express by Agatha Christie (library audiobook) this one is narrated by Kenneth Branaugh a
nd I think I liked it better than the Dan Stevens version. Loved all the voices.
The Wife Between Us by Greer Hendricks (library) another of the unreliable narrator type books. One twist came early, maybe too early. It was a little disjointed, I had trouble believing some of it and there were more twists towards the end. It was entertaining, but I am getting jaded by this "genre"
There Weeks to Say Goodbye by C.J.Box. Thriller about an adoption gone wrong

The Female Persuasion by Meg Wolitzer
The Outsider by Stephen King
The Perfect Nanny by Leila Slimani
Red Clocks by Leni Zumas
Fall from Grace by Tim Weaver
Posted by Amanda from Seattle at 7:03 PM No comments:

One of my favorite days that I spent in Sydney, I took the ferry over to Cockatoo Island.  Cockatoo Island reminds me of Angel Island in the San Francisco Bay. It has a long history from the days when the Aboriginal peoples used it as a base for fishing, until it's days as a shipyard and dockyard in the 1980's. Now it is the site of art installations and a location for filming movies, most notably, the recent film Unbroken. Cockatoo Island was transformed into the Japanese WWII camp for that movie.   In the 1800's the island was a prison. The buildings were constructed by the convicts. On the tour, just like touring Alcatraz in San Francisco, they have recordings from people who actually lived here when it was a prison, when it was a shipyard. So I highly recommend the audio tour. 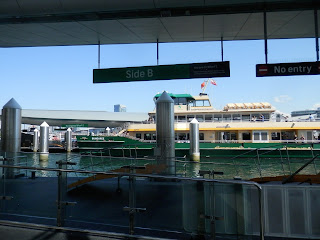 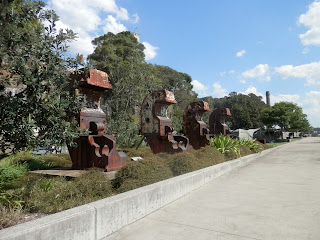 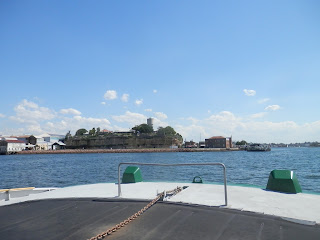 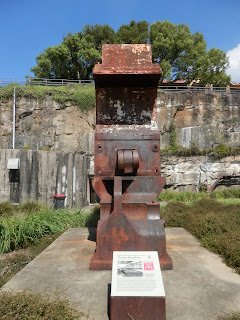 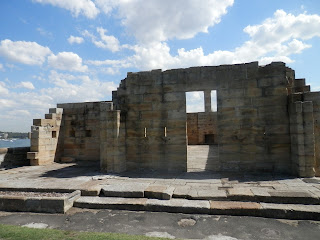 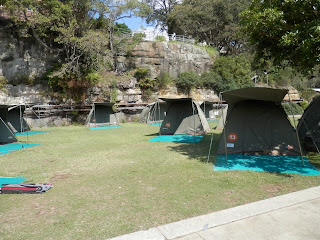 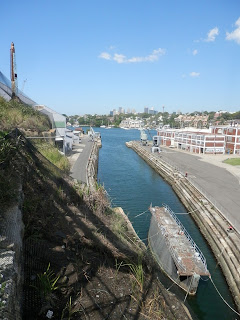 Cafes and Bars on Cockatoo Island can keep you hydrated and fed on your day trip over to the island. 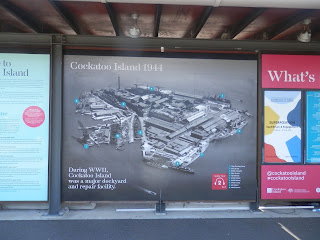 Like Alcatraz, which was occupied by Native Americans in protest, Cockatoo Island was also occupied by an aboriginal group in 2000 for 4 months. 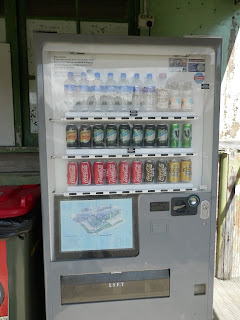 Cockatoo Island can be done as a day trip from Sydney very easily. It is right in the harbor within sight of the bridge! Boats leave from Cingular Quay and from Barangaroo Wharf to Cockatoo all day long.
Posted by Amanda from Seattle at 6:06 PM No comments:

One of my favorite places in the entire world, Ireland! Thanks to all my friends and family who visit and send me postcards.  I need to travel to Ireland more often myself!!! 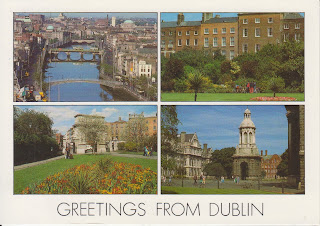 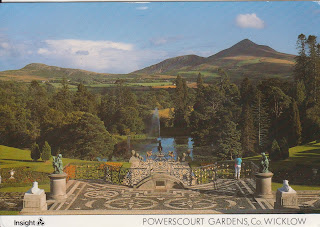 Posted by Amanda from Seattle at 12:17 PM No comments:

So Ryan and I just spent 19 days in Australia, 5 of those days, we spent in the Blue Mountains outside of Sydney. We took the train from Sydney 2 hours out to the town of Katoomba and we stayed at the Blue Mountains Backpacker Hostel. We were not able to get a private room, however, we did have a room with only 4 people. So we shared with a fellow from Brazil, named Anderson. Anderson was in town for a month, working for the railroad. Then for one night, we also shared with a fellow from the Netherlands named, Arnold. The Blue Mountains Backpacker Hostel was extremely clean and in a lovely building. It was a great location, not far from the train station and very close to everything in Katoomba. Included with our stay at the Hostel, we got a ticket on the Hop On Hop Off bus in the Blue Mountains. It was good for an entire week! More days than we needed. I took the bus every single day to get to trailheads and other towns in the Blue Mountains. 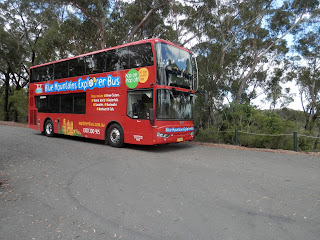 Our first day in Katoomba, we did the entire loop of the Hop On Hop Off bus to get the lay of the land. Then we decided to see Scenic World. Scenic World is an area that was once full of coal mines. The Railway there was originally built to bring up coal from the mines to the top of the ridge. It is now the steepest passenger railway in the world at 52 degrees. 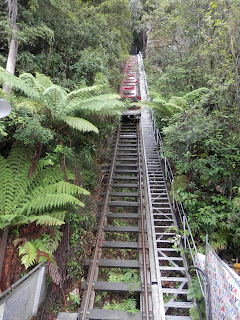 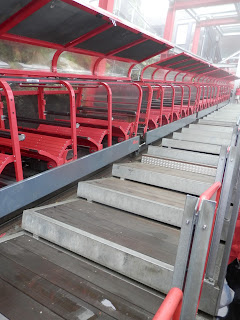 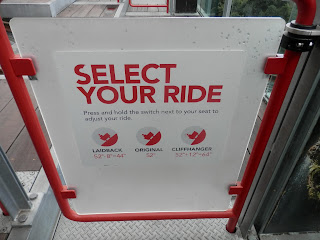 You can hike around Scenic World at no cost, however to ride the Railway, the Cableway and the Gondola, it costs money. So we spent one day riding all the rides at Scenic World, although we would come back and hike thru the area for another day. 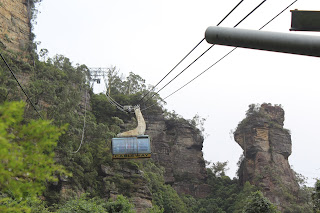 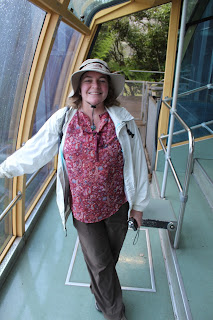 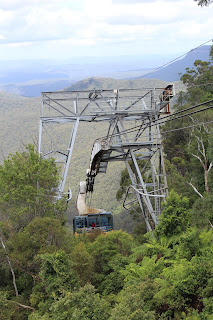 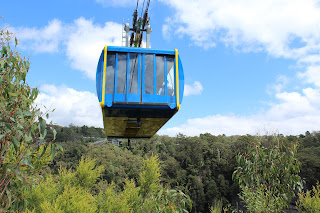 The next day in the Blue Mountains, I rode the bus out to Katoomba Falls and Ryan of course walked out from the hostel. We hiked around Katoomba Falls and then back to town. One of the routes we took were the Furber steps, these are approximately 990 steps chiseled into the side of the cliff back in 1908.

The main rock formation to see in the Blue Mountains is The Three Sisters. The legend behind the three sisters is that three sisters, Meehni, Wimlah and Gunnedoo, lived in the Jamison Valley as members of the Katoomba tribe. They fell in love with three men from the neighbouring Nepean tribe,but marriage was forbidden by tribal law. The brothers were not happy to accept this and decided to use force to capture the three sisters. A major tribal battle ensued, and the sisters were turned to stone by an elder to protect them, but he was killed in the fighting and no one else could turn them back. At the base of the Three Sisters was another 900+ step staircase that Ryan climbed, called the Grand Staircase. After experiencing the Furber Stairs, I took a pass on the Grand Staircase. 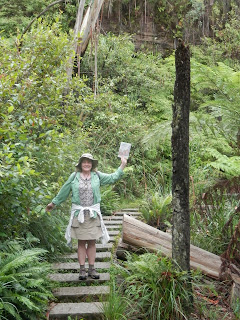 The other towns near Katoomba are called Leura and Wentworth Falls. The Hop on Hop off bus goes through all three towns and each town has cute shops and cafes. The train also stops at all 3 towns. So Ryan would continue his hike to get more miles and I would quit and go to town for a few hours before we would meet up back at the hostel for dinner time.

I could have spent many more days visiting more areas in the Blue Mountains. It was fabulous and I highly recommend it! Can totally be done as a day trip from Sydney if you only have a day. I recommend checking out Katoomba, and visit Echo Point to see the Three Sisters.

I just love these Retro looking postcards from the National Parks and many of my friends and family members have sent me cards from different parks that look like this! 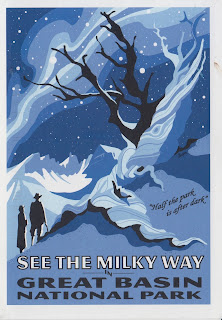 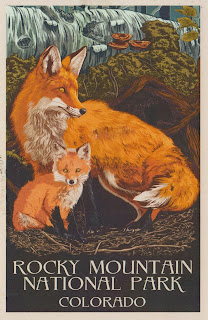 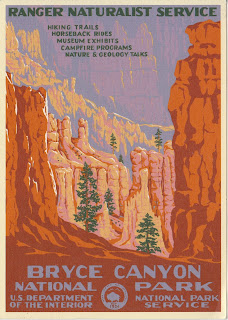 Happy Birthday to me (this week) and everyone knows that I love airplanes and airports and aviation, so I often get these kinds of postcards sent to me from friends and family. Thank You!! I love it!! 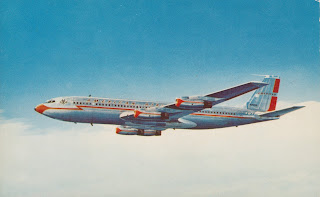 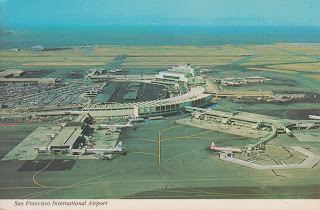 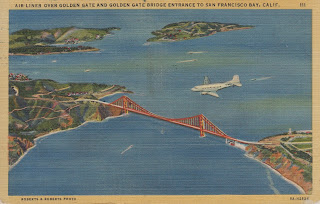 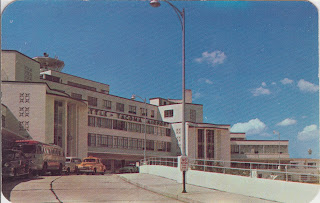 Posted by Amanda from Seattle at 10:22 AM No comments:

Oh my goodness, 2 postcards from Paris that do NOT have the Eiffel Tower on them!! What are the odds? 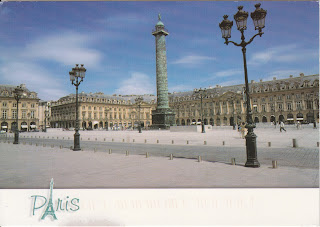 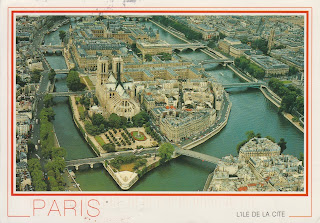 Posted by Amanda from Seattle at 10:19 AM No comments: