First Camping Trip in the Behemoth

This past week Ryan and I took the first camping trip in my new car. I have taken to calling the car the Behemoth because it is so much larger than the VW that I was used to driving. We drove down to the Eugene, OR area so that Ryan could climb a 250 ft. Douglas Fir for his birthday. www.pacifictreeclimbing.com

We camped at an area called Fall Creek near Lowell, OR. It is about a 6 hour drive from Seattle and a lovely part of the Willamette National Forest. We had a campsite next to a babbling little creek and on Sunday night, we had the campground to ourselves. 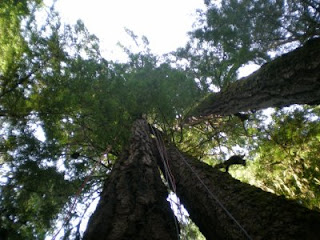 The next day bright and early, we met with the guys from the Pacific Tree Climbing Institute so that Ryan could begin his climb. I was originally going to go in search of internet access or look for some local letterboxes. But the Tree Climbing guys convinced me to come along and I ended up suiting up in harness and ropes and climbing up the 250 ft. Douglas Fir right behind Ryan! We hiked a few feet into the forest to a group of three trees that the climbers have nicknamed "The Three Musketeers". We would be climbing Aramis. 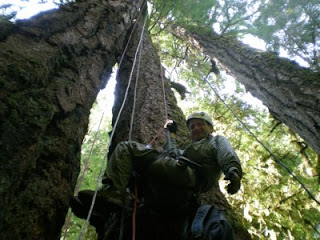 Another lady joined us and there were two guides to help us up the tree. We were outfitted with climbing harnesses, gloves and helmets. Then it was a matter of inching our way up the tree. It took us about 2 1/2 hours to climb up to about 200-210 feet. I was certainly the slow one. 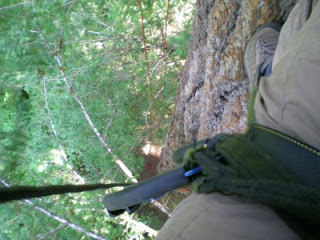 Ryan was a natural. At about the 100 ft. mark, they have hammocks or "boats" secured in the branches of the tree for when they have people spending the night! It is at this point that you can see that the Porthos tree has lost it's top. 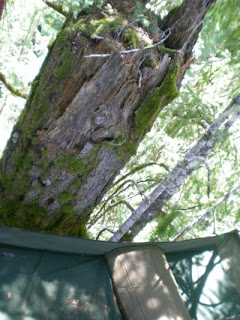 We had a lunch at the top of sandwiches, apples and cookies. The views were terrific. The ropes we are climbing on are secured at the top of the tree. We asked how they get the ropes up there and found out that when they first climb a tree, they shoot the ropes up with a bow and arrow. They will climb up, checking along the way to make sure that the tree is sound and not diseased or rotted in any way. It was a breezy day when we were climbing, which was nice because it kept away the bugs. But at the top, you could feel the tree sway with the wind. Then it was a simple thing to rappel down to the bottom again. 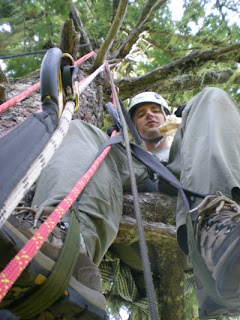 You just had to be careful about not hitting the branches on the way down. When I reached the ground, my legs were like spaghetti. I definitely used muscles that I was not used to using! You used your quads in your thighs and your upper body the most to get up the tree. My hands were also sore the next day. I didn't even know that I had muscles in my fingers. I must have really had a tight grip on that rope. :-) 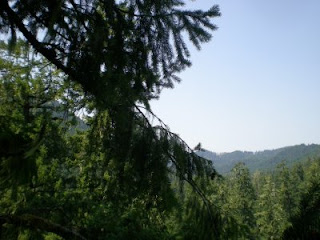 From Lowell, OR we went into Eugene to spend the night. I had plans for Tuesday to visit the University of Oregon at Eugene. In their library, they have some boxes of papers from the Stratemeyer Syndicate. Edward Stratemeyer was the creator of Nancy Drew and the Hardy Boys and countless other children's book series. In the papers, they have a manuscript of a Nancy Drew book and fan letters written to the Syndicate authors from 1928 and 1929. Fascinating stuff. While in Eugene, we met up with a bunch of local letterboxers and had a wonderful night of Pizza and Margaritas! 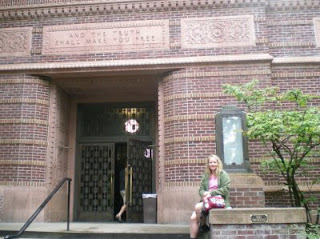 On Tuesday, after spending time in the University Library, we drove out towards Sisters, OR. There, we met with some letterboxing friends at a campground on Suttle Lake. We spent two nights there on the lake, camping, hiking, letterboxing and telling stories around the campfire. All in all, I was very pleased with the performance of the Behemoth.

As a reminder, for those of you who have not already, you can pledge to my Washington Trails Association Hike-a-thon directly on their website this year. WTA Hike-a-thon I am already almost halfway towards my goal of $1,000 and August has not even started yet! That is very encouraging. I have gotten a lot of small pledges from flight attendants who did not pledge in previous years, so that is great -- Thank You! And Doublesaj and Old Blue have put out a challenge to letterboxers: They'll increase their pledge by $10 for each letterboxer (up to 4) who pledges $25 or more who've never made a pledge before. So far, no one has taken them up on that challenge.
Posted by Amanda from Seattle at 9:22 PM

Robb and I did, too!

Thanks for sharing your treeclimbing adventure! I will definately have to fit that in my schedule when I visit Stinkerbell sometime in the future, she's in Portland.

Fall Creek near Lowell OR was my family's FAVORITE and much-loved camping spot as I was growing up.....your blog brought back many memories :o)

Wow the NW has some beautiful country!
I must come out thaqt way and visit my sister in renton washington

Amanda from Seattle said...
This comment has been removed by the author.
4:46 AM