what's up with the magazine? 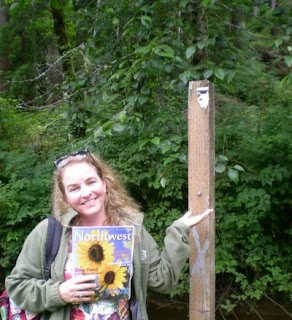 I have hiked 32.6 miles for hike-a-thon so far! You might have noticed that I have a Washington Trails Magazine in the Photos about my hiking for hike-a-thon this year in my previous blog entries. In order to prove that I have hiked the trails that I say I am hiking, I am required to take a picture with the August issue of the magazine. I take a ton of photos of all my hikes anyway for the blog, so this hasn't been that much trouble for me. UNTIL....until my sister and I were already on the ferry to the Olympic Peninsula and I figured out that I had left the Washington Trails Magazine at home. We stopped at a Fred Meyers and several other grocery stores as well as a couple of bookstores and local general stores in the towns of Port Orchard and Shelton on the Peninsula, but we could not find another issue of the WTA magazine to use while taking pictures. I figured since it was just to prove that I was hiking these trails during the month of August that I could find an emergency replacement. So we bought the August issue of Northwest Magazine with a lovely picture of sunflowers on the cover to use while we were on our trip to Lake Quinault. So the pictures in this blog entry will feature Northwest Magazine with Sunflowers. Our first hiking stop was at the Huff N Puff trail in Shelton, WA. Gotta love a name like Huff-N-Puff for a trail! Although there wasn't much to Huff and Puff about, it was pretty tame as trails go. 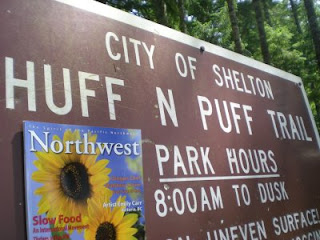 We spent the next two days camping and hiking around Lake Quinault. We discovered that there is still a lot of damage from the winter storms in this area of the Olympic National Park. I hiked the Lake Quinault Loop and the Gatton Creek Trail. 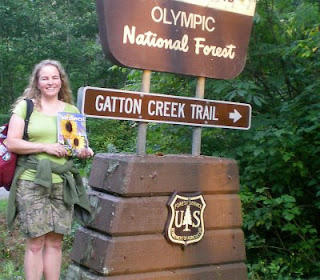 While hiking up past Irely Lake we encountered some folks doing trail work on that trail along Big Creek. 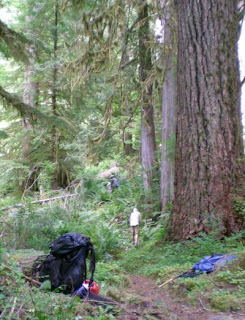 There were a lot of trees down over the trail and a couple of spots required us to scramble up and over as the trail disappeared around the debris. 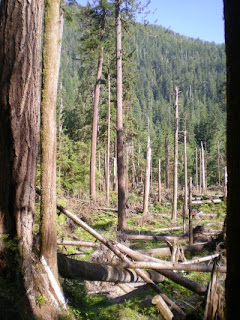 One of my favorite little hikes is at the Ranger Station on the north side of Lake Quinault. It is the Kestner Homestead Trail and takes you through an old homestead. A brochure at the beginning of the trail details what life was like on the homestead in the early 1900's. 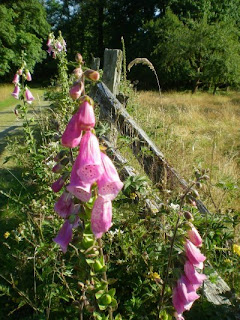 There is also the Maple Glade Trail at the same Ranger Station and it is a short little nature trail.

I have been trying to eat sensibly, but after dinner, I splurged on Raspberry Shortcake! 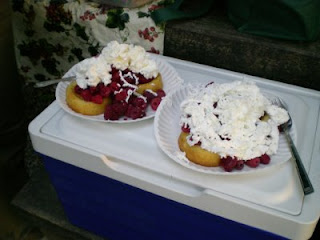 On the way home to Seattle, we stopped in Aberdeen for a hearty breakfast at Duffy's restaurant. 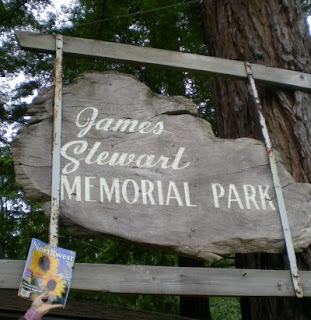 Later at the Stewart Park trail, the sign was missing so we compromised there with a shot of the park sign that is above the picnic pavilion. I also hiked along the Morrison Riverfront Walkway. 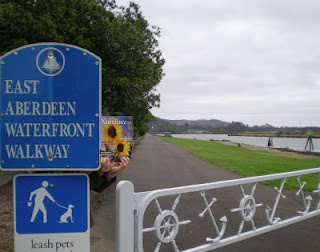 For Hike-a-thon, I still need approximately $250 to meet my goal of $1,100. Thanks so much to everyone who has contributed so far! Also if you are a letterboxer and are contributing to receive the WOM LTC, please shoot me an email with your snail mail address so I can get that out to you ASAP. Also if you contribute $35 or more towards Hike-a-thon you are eligible for WTA membership and you can receive your own copies of the Washington Trails Magazine throughout the year. They have wonderful articles about the trails here in Washington State, as well as more general articles on Backpacking, Outdoor Gear and even Fire Lookouts! :-)

I love the Quinault area, my husband and I went there for our 1st anniversary and where we found out about letterboxing!! We enjoyed the homestead trail as well and thought that it needed a letterbox too. Unfortunately, the Quinault boxes aren't listed on Atlas Quest!