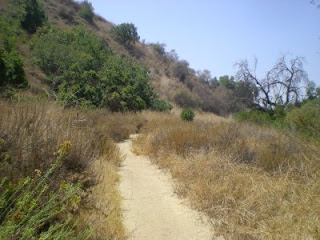 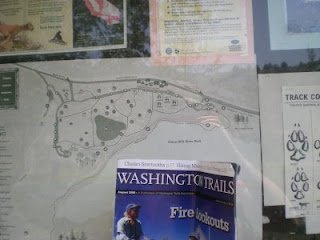 I had a layover in Los Angeles, CA and I was able to hike a few miles for hike-a-thon at the Carbon Canyon Regional Park in Brea, CA. My total mileage is now up to 53.5 miles.

The Park is near the site of a former settlement called Olinda. Olinda was settled by farmers and ranchers in the 1800's. With the arrival of the Santa Fe Railroad, farmers and ranchers flocked to the area and cattle and sheep were pastured in the open fields which comprise the park. In the late 1800's the oil boom was on. A multiple of oil companies drilled in the foothills of Orange County. Olinda was an oil town with the oil company owning the houses, stores and the land. The area thrived as an oil boom town until the fields began to shut down in the 1940's. 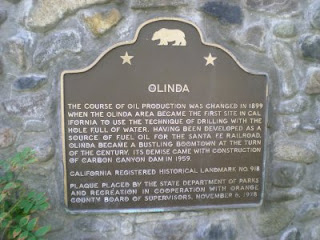 The park was created in 1975 after a dam was built at the mouth of the canyon for flood control in the 1960's. The last physical evidence of the community of Olinda became a memory with the development of the dam. The park is full of the flora and fauna of southern California. 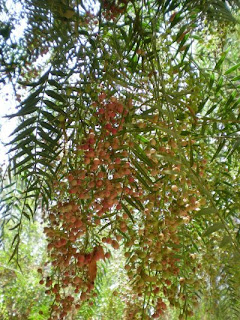 1. Do not hike alone. The majority of lion attacks on people have involved individuals hiking or running alone. The size and noise of groups seems to deter lions. (difficult for me, but I was in cell phone contact at all times :-)

2. Do not run because running stimulates a mountain lion's instinct to chase. Instead, stand and face the animal.

3. Do not crouch down. The mountain lion experts conclude that a human standing up is just not the right shape for a cat's prey. But a person squatting or bending over can looks like a four-legged prey animal. If you are in mountain lion country, avoid squatting, crouching or bending over, even when picking up children. Crouching down or bending over also makes the neck and back of the head vulnerable. (difficult to not bend down when you are letterboxing! :-)

4. Do all you can to appear larger. Raise your arms. Open your jacket if you are wearing one. Keep everyone in your group together, appearing as one large shape to the lion. Wave your arms slowly and speak firmly in a loud, low voice. Convince the mountain lion that you are not prey and that you may be a danger to the lion.

5. Fight back if attacked. Throw stones, branches, or whatever you can reach without crouching or turning your back. People have fought back successfully with rocks, sticks, tools, jackets, and their bare hands. Since a mountain lion usually tries to bite the head or neck, try to remain standing and face the attacking animal. Wildlife experts do not recommend that you play dead. 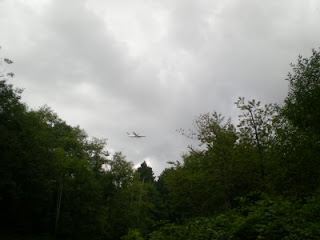 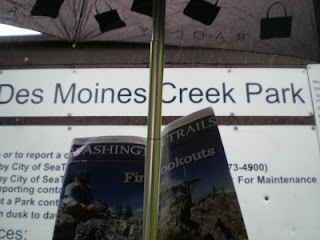 Back home in Seattle, I was able to get in one mile on the Des Moines Creek Trail down by the airport. It is along the flight path to SeaTac and the airplanes come in every couple of minutes. I really enjoy it! :-)

Only one week left for hike-a-thon and Ryan and I will be away visiting Ireland for 4 days, so I don't know how much more hiking I will be able to do for official hike-a-thon mileage. Don't forget to get your pledges into me by the first of September or do it yourself via the WTA website:

Thanks so much to everyone who has supported me all month! Letterboxers, don't forget to send me your snail mail address so I can send you the Word of Mouth LTC.

Word of Mouth LTC
Posted by Amanda from Seattle at 1:49 AM

1a. When hiking with someone make sure they are one of the "armed" Pilots. Anything that is .40 and above is best.

So you're saying that hiking outside of Washington state counts? ;-)

Congrats on doing so well hiking. Ryan and I never saw any mountain lions in California.

6. Always hike with a partner. Remember, if a lion attacks, you don't have to out-run the lion, only youyr partner!

A few months ago, my friend Ryan (the husband of my friend Amanda -- how weird is that?) was out hiking. He was in the hills east of Oakland, by himself.

He had just come to the top of a huge ridge, and was catching his breath and psyching himself up for the next hill, when *something* leapt across the path in front of him.

It was so swift, that he only realized it was a mountain lion by the tawny shape and the distinctive tail. He never got a look at the head, because it flashed past so fast.

Here are some valuable statistics:

In California, from 1986 through 1998, exactly two people died from mountain lion attacks, whereas in one year alone, over 4,000 people died in traffic accidents, including 800 pedestrians. This means that your car or someone else's car is ~2,000 times more likely to kill you than is a mountain lion.

Over 300 people have been killed by domestic dogs in the U.S. between 1979 and the late 1990s. This means that your family dog or your neighbor's dog is ten times more likely to kill you than is a mountain lion and hundreds of time more likely than is a coyote.