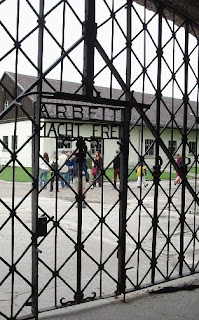 But before I get to the car issues....after criss-crossing the country a few times, it was time to go across the ocean again. I was supposed to go to Glasgow, but I traded at the last minute for Munich. Gotta love the flexiblity of the Flight Attendant lifestyle.
Once in Munich, the weather was cloudy and dreary, not unlike what it had been like in Seattle. So what to do on a dreary day in Munich? Take the train to Dachau. Now, I was surprised that more people don't know about the WWII Concentration Camp at Dachau, Germany. I thought that when I said I was going to Dachau, that people would automatically know that I was going there to see the Concentration Camp Memorial. But that was not the case, so I am going to give you guys a little history lesson for a moment. 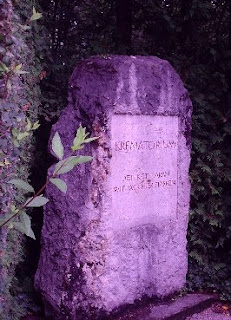 Dachau was the first Concentration Camp to open for business in March 1933 and it operated as a prison, work camp, extermination center and training camp for the SS Guards until it was liberated by U.S. Troops on April 29, 1945. It was actually the model for all the Nazi concentration camps that would come after it. The ironwork on the gate when you enter the camp says Arbeit Macht Frei, "Work will make you Free." At this camp the prisoners were 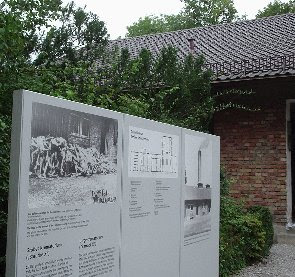 exterminated through work. They were slaves for Hitler's war effort. I was amazed by the size of the facility. It was on the grounds of a abandoned munitions factory from the First World War. It served as a refugee camp after the war and until the 1960's when Holocaust survivers initiated the drive to make the site a memorial. The entire place has been turned into a museum and memorial to the people who died there. It is free to enter the memoria and a lot of new exhibits opened in 2003 with everything labeled in German and English. Except for this stone located by the crematoriums it says in German: "Think about how we died here" 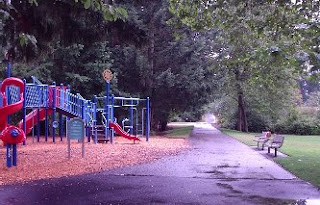 Back in the USA, I had a day off and hiked the Lake to Lake Trail for hike-a-thon. This trail is located over in Bellevue, WA. It was a dreary day here in Seattle. It just would never stop raining, so I decided not to let a few raindrops stop me from getting in some mileage. The thing about a rainy day in Seattle, you generally get the trails and playgrounds to yourself. I hiked from 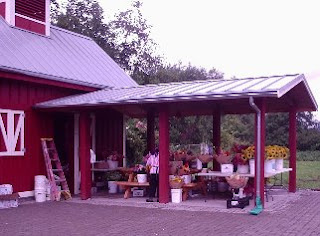 Robinswood Park all the way to the Lake Hills King County Library. The Library is a great place to stop and turn around. I got to check out the books for sale to support the library and they have nice clean bathrooms. It had been about a year since I had last hiked along the Lake to Lake trail and there was a new Farm Stand near the P-Patch Garden just past Phantom Lake. On my return, I had to stop and buy some flowers for my apartment. 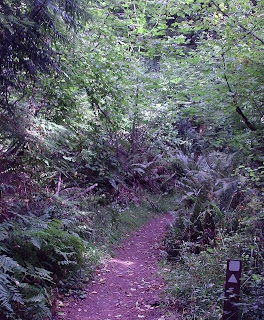 decided to hike the Outer Perimeter Loop Trail. It is marked by squares on the tiny little trail signs. And it can get kind of confusing in the interior areas of the park when the Outer Trail merges with the Inner Trail and crosses and joins the Spine Trail! All are represented by symbols on these tiny little trail signs, as you can see in this photo. If you are walking at a quick pace, you can sometimes miss a trail intersection. The trail meanders along the cliffs above Puget Sound and there are great views of the Tacoma Narrows Bridges. These Bridges are at the site of the famous Galloping Gertie 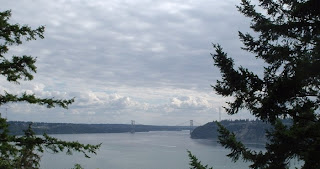 Bridge that collasped in 1940 after being in service for only 4 months! The newer bridges are nicknamed Sturdy Gertie. The newest bridge opened this summer and I believe it is a toll bridge, but I don't know for sure because I have not been over it yet. 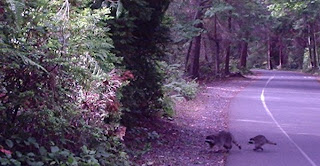 I also saw some wildlife while I was hiking around Point Defiance Park. A mama raccoon and her 3 babies were trying to cross the road. I caught this photo of Mama and one of her babies!
So I know you are wondering about the car troubles that I alluded to in the title of this post. Well, I'm out at Point Defiance Park and I had driven Ryan's car, which I don't do that often. Ryan's car has automatic locks. My car is older and has manual locks, plus my Volkswagen won't let you lock the driver's door from inside, you have to lock it with the key from the outside. Can you see where this is heading?
I was out on the trail when I first noticed that I was missing the car keys. I was frantic. I thought I had dropped them somewhere along the way. I backtracked for quite a while. I didn't see anything. I was convinced it was hopeless and the keys were lost in the woods. But wait, maybe the keys fell when I got out of the car and are lying in the parking lot beside the car. So I hike back to the car and look all around the driver's door. No keys on the ground. I am really frantic now. I look inside the car and there are the keys hanging from the ignition. Boy, do I feel like a dummy. I'm gonna have to put AAA on speed dial. Well, all's well that ends well. The AAA locksmith was out there in less than 30 minutes and I was able to drive back to Seattle without any further incident.
I have 49 miles under my belt for hike-a-thon. Only one mile to go. And pledges are up to $1105. Thanks so much to everyone who pledged this year! Don't forget, I need your money (checks made out to WTA) by September 3rd. If you want to paypal me, just drop me an email and I can give you the info for that.
Posted by Amanda from Seattle at 3:04 PM

I have heard of Dachau. Maybe because I have BEEN to Dachau. It was grey and dreary when we arrived, but the sun came out after a while. It just seemed wrong somehow. A place like that should always be dreary. Back by the crematorium, an older gentleman was talking to a group of people. I stopped and listened for a few minutes and it turned out that he had been a prisoner there.

i love the raccoons :)

i love the raccoons!

I too have been to Dachau. It is a very somboring experience. The buildings were very eerie, especially the crematorium, which still had an odd odor after all of these years.....

I've also been on the Tacoma Narrows Bridge, though I have never been to Point Defiance Park. My aunt and uncle live in Gig Harbor, and so I've traveled that bridge many times. I love Washington!

I went to Dachau twenty years ago. Creepy place. You can feel the evil. I couldn't stay very long, it was just too uncomfortable.

Jane
(Daisy of Daisy and Onslow)

I have been to Dachau as well... we took the bus (full of roudy Aussies) out to the site. When we arrived and passed through those gates with the 'work will set you free' inscription, we all became quiet, respectful and reflective - of what horrors man can manage to do to his fellow man.

The day you reported on your initial car trouble, complete with tow, I was having car trouble - also ending in a tow. You can read all about my adventure in my new letterbox, "Well, It Could Be Worse".

I guess hiking is easier and less risky than taking the car, huh?
Marmalade

I have been reading you blog for a little while and I love to read them. When I was 19 I went out to Portland to visit my aunt an uncle and we went to Washington and those two places are my favorite places to be visit, but have not been there for a long time. Poohbear