Hike-a-thon is off to a rousing start!

My sister, Alisa flew up from Folsom, CA to go camping with me on the Olympic Peninsula. I got in late, late, late on Tuesday night from flying a trip to Amsterdam and met up with her at my apartment. We only got a few hours sleep before we gathered our gear together and headed off for adventure.
First stop was a yummy and filling breakfast at Endolyne Joe’s here in West Seattle. It is located right near the Fauntleroy ferry terminal and I just love their theme food. This season it is Brazil!

We got on the Fauntleroy Ferry to Southworth over on the Kitsap Peninsula and began our journey. Once on the other side of the water, we stopped in 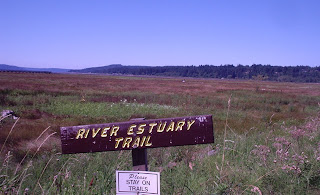 Belfair, WA for a little hiking at the Theler WetlandsTrails. We hiked 3 miles on the River Estuary Trail and I was able to find one letterbox.

http://www.thelercenter.org/wetlands/index2.php
Next we drove up to the Staircase area for a hike in Olympic National Park. We immediately discovered evidence of the destruction of the storms of last fall. I 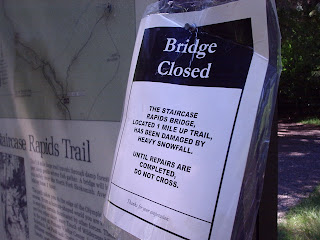 had wanted to do a loop hike incorporating two trails, Staircase Rapids Trail and the North Fork Skokomish Trail, but the bridge was out due to the storms last fall. So we just did an out and back hike on the Staircase Rapids Trail for 2 miles total.
The day was beginning to dwindle down, so we drove over to Elwha Valley to find a campsite for the evening. Because we got there so late in the day, the Altaire campground by the river was already full, so we settled for the Elwha campground across the road. It would become our home away from home for the next two nights. A campfire and roasted marshmallows finished out the day.
Bright and early on Thursday morning, we got up and started hiking to Hume Ranch. This hike has many names in the different guidebooks I consulted. It is called the Hume Ranch Loop, The Elwha River Valley Loop and The Geyser Valley Loop. There are also many different mileage reports given for the hike depending on which side trails you take and how far down the river you travel. Alisa and I only hiked as far as the Hume Ranch cabin, looping down to the river and Krause Bottom and taking a side trail to see the Goblins Gate. We estimate that we hiked 6 miles total. We hiked along the ridge to Michael’s Cabin and on to Hume Ranch, then descended to the river bottom and hiked back towards the trailhead. Along the way, we met lots of hikers coming in the opposite direction. 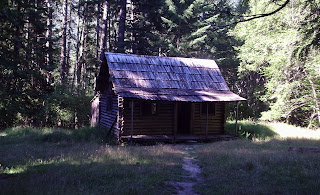 We discovered why when we had to hike up from Rica Canyon and it was straight up for a half a mile! It would have been much easier to do the loop in the opposite direction.

We were done with the Hume Ranch hike before lunch and we decided to drive into town for more urban hiking along the Olympic Discovery Trail.
http://www.peninsulatrailcoalition.com/
This would also allow us the opportunity to eat lunch at a fancy seafood restaurant and perhaps after our urban hike we could take in a movie at the Deer Park movie theaters on Hwy 101. Green Guillemot had hidden some 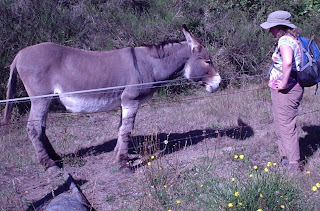 letterboxes along the Olympic Discovery Trail and we were able to find them as we walked the rails to trails corridor. Along the water we had wonderful views of Port Angeles and even Canada only 17 miles across the strait. A friendly burro was grazing in a field near the trailhead. After the movie, we returned to the campground and were able to enjoy another evening by the fire.

The next morning we broke up our camp and headed back to Seattle. The plan was to do a lot of little hikes along the way to the Bremerton Ferry terminal. We stopped in Silverdale, WA and hiked 2 miles along the Clear Creek Trail, and found another letterbox.
http://www.clearcreektrail.org/
We were on our way to Anderson Landing Preserve when disaster struck! My car had been having symptoms of problems all month. It was slow to accelerate and it did not have any power on hills. I had been having a hard time climbing the hill on my street in Seattle and I would often just avoid hills with a lot of grade. We had even vetoed a trip up to Hurricane Ridge yesterday because I did not think my car could make it.
On the way to Anderson Landing, we found ourselves on a very steep hill and my 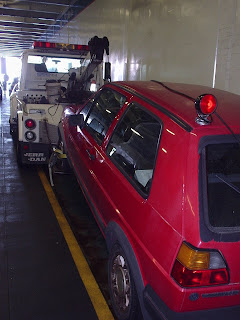 car just could not make the climb. The rpm’s kept rising and the speed kept dwindling until we were stopped and the smell of the burning clutch filled the air. With only 2 bars on the cell phone, we were finally able to reach AAA and a tow truck was soon dispatched our way. Unfortunately, there would be no more hiking or letterboxing today! On the ferry ride back to Seattle, we were able to see some aerobatics airplanes practicing for SeaFair over the city. All in all, I found 8 letterboxes, hiked 16 miles and I have pledges for $765 from 20 people! I am still $235 away from my goal.
Posted by Amanda from Seattle at 12:01 PM

That proved quite an adventure, Amanda. It's yet another example of the uncertainties that lie ahead when you hit the trail.
I'm not into long distance hiking and backpacking anymore. Have given up a one-time resolve to visit every U.S. mountain range and content myself with letterboxing forays instead. The Olympics were one of my objectives, and I almost made it back in April. We got close coming up from Portland and driving along the Hood Canal to Port Townsend for lunch at a funky Chinese restaurant- then returning to Federal Way for an overnight before flying back to Syracuse next day. The ceiling was only about 2,000' in the eastern Olympics, so probably I didn't miss much. And oh yeah, we did get a set of boxes near Battleground, just north of Portland.
Good luck on your Hike-a-thon.
Bob / 'Cock o' the Trail'