Kudzu and Beer and Cornfields Oh My!

I traveled from Seattle to Philadelphia to attend a letterboxing gathering on Saturday the 11th. (and to go to work flying to Brussels) It started out not so good when I did not get a seat on the redeye flight from Seattle to Philly. As a flight attendant, I travel stand-by and if there is not a seat available, then I can't go. But the airlines have cut back on service and they do not fully staff the airplanes anymore, so there is always a flight attendant jumpseat that is available for qualified crewmembers to sit on. The downside of the jumpseat is that you are no longer a passenger, you are now an auxiliary member of the crew, so you can't drink and you can't sleep. But when no other seat is available, it is still a way to get where you are going and so that is where I was seated 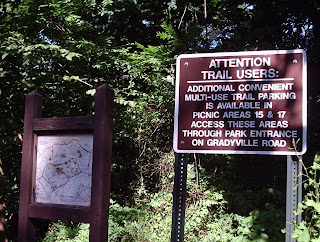 Friday night on my way to Pennsylvania.

When I arrived in PA, I immediately jumped into the rental car and made my way down to Ridley Creek State Park.
http://www.dcnr.state.pa.us/stateParks/parks/ridleycreek.aspx
The gathering was not going to start until about 10am and I was early, so I 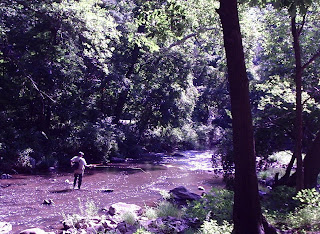 started my day hiking the Multi-Use trail that circles the park for 5 miles. It is a broad paved path and actually utilizes roadways that were there when this area was a village in the 18th century. Some portions run along the creek and there were some flyfishermen out this morning. When I completed the Multi-Use Trail, I still had some time to kill and I found a couple of letterboxes along the Yellow Trail. It was now 10 am so I made my way to the picnic area for the Letterboxing Gathering. 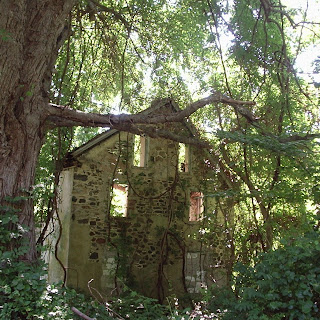 I got to see a lot of letterboxers who I had not met before and I also got to see some old friends who I had met at previous Gatherings in Pennsylvania. My sister and I had been to Ridley Creek State Park a couple of years ago to find 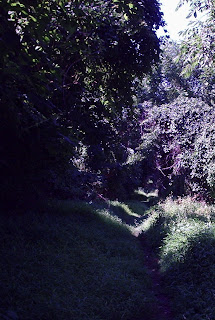 letterboxes, but there were a lot of new ones planted recently for this gathering, so I hiked the Blue Trail and the White Trail looking for more boxes, some of the trails were almost overgrown with Kudzu! In many areas, I thought the vines were reaching out to grab me. It reminded me of that Scott Smith book, The Ruins, creepy. I returned to the picnic area for lunch.
I should note that I had not had any sleep for at least 24 hours and I was pretty much running out of steam. As long as I kept moving, walking and hiking I was okay, but once I stopped to sit down I would feel like I was going to drop. I left the park early, with letterboxes still to be found! Maybe another day. Back at the airport I was able to get in a little nap before my Brussels flight. All in all, I hiked 8 miles at Ridley Creek State Park and found 10 letterboxes.
The flight to Brussels was a long 7 hours from Philadelphia and I was operating on only a few hours of rest. I had huge plans to get to a park in the southern part of the city and hike some more miles for hike-a-thon, but I was just too tired to attempt it! I slept most of my layover away. I did get out of the room to explore the Central part of the city. I had never been to Brussels before! It was a Sunday 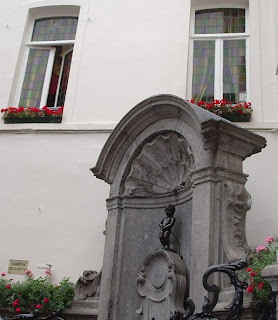 and the Grand Plaza was crowded with tourists. I really wanted to find the manneken pis. This is the symbol of Brussels.
http://en.wikipedia.org/wiki/Manneken_Pis


It was only a few paces off the main square and was surrounded by tourists trying to take pictures! There were a lot of street performers 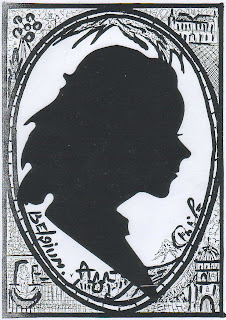 all along the cobblestone streets leading up to the Grand Plaza. I was especially fascinated by a man creating silhouettes. I even had him make one of me! I had to stop for a beer at one of the cafes along the way. You are supposed to eat Mussels and Fries with your beer. I love mussels, but I didn't have enough money for the full meal deal, so a beer would have to do it. The Belgian beer is amazing. I had 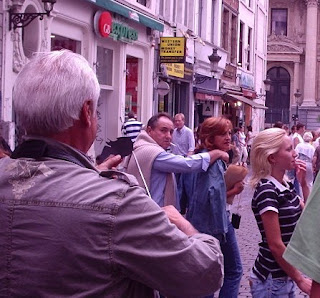 no idea it was so extensive and diverse! Here in the states, I always think of Fat Tire Beer and that's it. I bought a couple of bottles of different beers to bring home and try later. I will be reviewing them for the Atlas Quest website later this week. 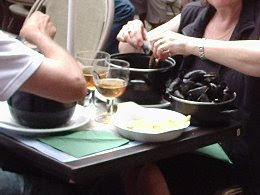 http://www.atlasquest.com/boards/message.html?gMsgId=119604;gBoardId=377
I walked around a lot, but none of it counted for hike-a-thon.
Monday, we worked back to the USA and I flew down to Charlotte to stay at my 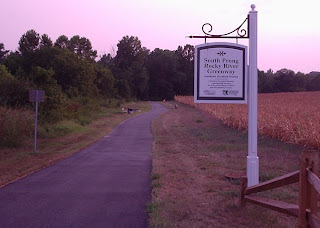 mom's house. I got in just in time to take a walk on the Davidson Greenway for 2 miles for hike-a-thon. This is a brand new hiking and biking trail, but it already gets a lot of use from the folks who live around here. It runs along cornfields for the first 1/2 mile. This corn is not for eating, it is drying on the stalks, and I think they use it for feed. Then the trail meanders through some 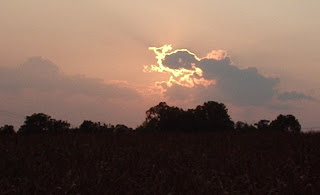 woods in a really nice housing development. The sun was setting as I finished my hike and returned to the house. Next stop is Las Vegas, but if you think I'm going hiking in 105 degree heat, you obviously don't know me very well!

Posted by Amanda from Seattle at 11:52 AM

So nice to meet you! Your adventure sounds wonderful, but exhausting! Thanks for stopping in PA.