Carless Hiking?? Not for me! 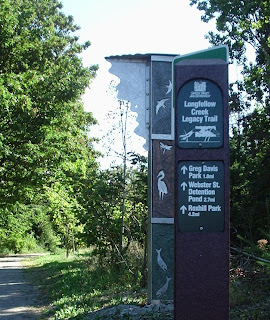 Well, when you last heard from me, car trouble had cut short my hiking adventures on the Olympic Peninsula. The next day I was wondering how I was going to get any hiking in for Hike-a-thon. Luckily, there is a terrific website that lists all kinds of hiking you can get to using the Seattle Metro System

http://www.eskimo.com/~pinyon/bushike/index.html
As I was perusing the internet, checking out all my options, who should walk in the door, but the Green Tortuga himself! Fresh (well, kinda stinky actually) from his Volunteer Vacation at Mt. Adams. Terrific! I grabbed his car keys and left 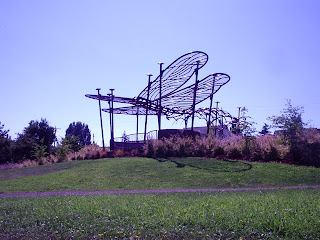 for my hike! Just a short jaunt down the Longfellow Creek Legacy Trail for only 2 miles today. The Longfellow Trail is relatively new and is quite close to my home in West Seattle. At the beginning of the trail is a really neat Dragonfly Pavilion and then a Fish Bone Bridge. I hiked a mile to the Greg Davis Park and then returned to the car. 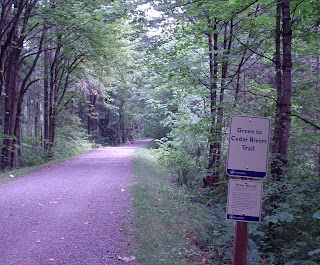 The next day, I hopped into Ryan's car again (they won't even be able to check out my broken VW until Monday!!) and drove down to Maple Valley, WA to hike a couple of miles on the Green to Cedar Rivers Trail. I hiked from the Lake Wilderness Arboretum to SR 516 (aka Kent-Kangley Road) and back for 5 miles total. There was a terrific letterbox series hidden along this trail and so that made it a lot of fun to hike!

Today, I was able to drive out to Tradition Lake and hike 4 miles around the lake. I was worried for a moment, because there were signs about Bridges Out 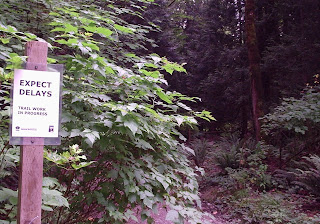 and Trail Work in Progress, but the smell of new lumber was in the air and I can happily report that the trails were in terrific shape! Two new bridges on the Around the Lake and Bus Trails! Logs and trees cleared from the trail by chainsaws. Even the drive up to the trailhead, which is usually strewn with potholes had been regraveled and scraped smooth. Not a pothole in sight!! These local parks were not immune to damage during last winter's storms and folks have really been out here working overtime to get them in shape for the summer hiking season. Bus Trail? Did someone say Bus Trail? You might ask, why do they call it the Bus Trail? So I 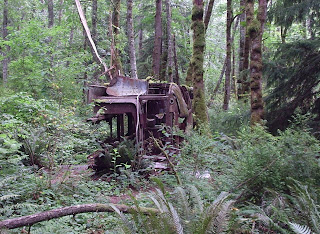 have included one last picture. My question is, "How did it get here?"

The last 3 days have netted me 11 more miles and 8 more letterbox finds!


Posted by Amanda from Seattle at 4:39 PM

It is amazing how things like that get into the middle of nowhere. I have found cars abandoned in the middle of forests with no roads in the past.

Poor GT, I hope you gave him a welcome hug before making a beeline for his car, even if he was stinky!

> There was a terrific letterbox series hidden along this trail

What makes a terrific letterbox series?

In my opinion, a terrific letterbox series contains really neat hand-carved stamps that all together create an interesting page in my logbook. Other people have different ideas about what makes a letterboxing experience great.

I read a book over this past winter, Into the Wild by Jon Krakauer. It's a true story about a young man who went into the Alakan Wilderness. His body was found in an old abandoned bus in the middle of nowhere, apparently buses were put out there for people or hunters who became lost. I wonder if that's a reason you found a bus in the wilds in Washington?!
-moonduck

Actually, Tiger Mountain and the Tradition Lake Plateau was once the sight of a huge logging operation. Supposedly there was more than 15 miles of railroad and a lumber mill and all sorts of civilization in this area up until the 1930's. But now it has all been reclaimed by the forest and is a wonderful park. So I think the bus is left over from that time period. In fact, I found this information online about the bus: The bus has been identified in several places as a Greyhound Scenicruiser, but Eric Erickson and Todd Sargeant have determined that the bus in question is too old to be a Scenicruiser. Instead, it is most likely a circa 1930 vintage Kenworth split level bus, commonly used for transport in the 1930s. The general build of the Scenicruiser and the Kenworth are very similar to the untrained eye, which may account for the variation in reports.
A long-time resident of the area, Russ Smedley, remembers seeing it on his rambles through the area in the late 1930s or early 1940s – and admits to being one of many youngsters who used the bus for target practice with his 22.

But how the heck did the bus get there? Recall that many of the trails in this system are actually old logging roads, and that will give you a clue. Eric Erickson and John Blincoe both contributed information about the bus’s use. John Blincoe remembers hearing that it was used “by one of the logging outfits that worked timber in that area” to haul the work crews higher on the mountain. Eric Erickson reports that it was later used as a logging camp (circa 1950). It was abandoned by 1954 and over time was turned over on its side and lost the motor and tires to salvagers.

What an adventure - Thanks for the link!