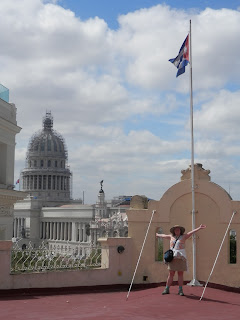 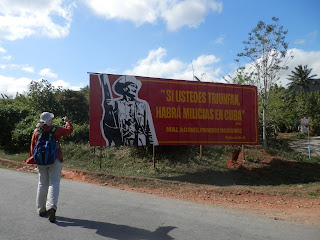 Okay, so Ryan and I decided to go to Cuba for my 51st birthday this year. US Airlines just started flying to Cuba in 2016. The US government granted approval for flights in July of last summer and American Airlines started service to the country last September. However, the loads are light and American has already cut back service from 13 flights a day to the island to only 10 and if the demand is not there, there could be more cuts. Tourism is still prohibited for US citizens and I kept telling Ryan not to say we were tourists!! Travel for education and vague "people to people" reasons is okay. To get the Visa, you just need to pick one of 12 US government approved reasons for travel. 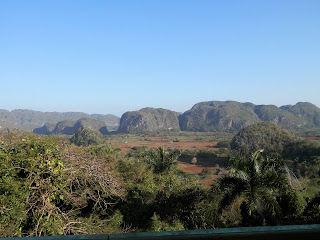 When preparing to go, I researched everything. I read blogs, I read books. I purchased 4 guide books that we took with us. Eyewitness Travel Top 10 Cuba, Moon Guide Cuba, Footprint Handbook Havana, and Full Compass Guides Real Havana.  I searched the internet. And now I will share the information I found with you.

The VISA:  If you travel American Airlines, you can purchase your visa at the ticket counter or at the gate when you check in for the flight. It costs $100 (some other airlines charge less, more on that later) and you can pay by credit or debit card. They will give you a bunch of forms to fill out. Keep these with your passport. They will stamp the forms and your airline ticket instead of stamping your passport. You will need some of this stuff for your return flight, so just keep it all with your passport.
This is where you pick your reason for travel. We picked Support of the Cuban people. It sounded good. No one ever asked us about our reason and we never had to defend our choice.

Credit Cards: They won't work. US Bank Credit and Debit cards do not work in Cuba. Don't bring them. I left everything at home except for one card to use for a hotel in Miami prior to the flight and for the Visa. Bring CASH.

CASH: They charge a 15-18% fee to change US Dollars. So basically if you take $100 you are only going to get about $85-87 back. We were there for 6 days and brought approximately $1000. This would have been a pretty large hit for us, So Ryan changed his dollars for Euros before we got to Miami. When you change Euros to the CUC in Cuba, it is approximately 1 for 1, so this worked for us. Canadian Dollars are another option. I changed my dollars for Canadian Dollars, and then to CUC in Cuba. Just decide what currency you want to have, what works best for you and use that.

Exchanging the money: At the airport there are two money exchanges, CADECA, one right outside of baggage claim and another upstairs at departures. Check and see which has the shorter line. There is going to be a line. You will get CUC which is the Convertible Peso for Tourists. There is another form of money called the Cuban Peso or Moneda Nacional. (CUP) It is for residents.  1 CUC equals 25 CUP We did not get CUP and we never really needed it. I read somewhere that the Cuban government was going to try to phase out the CUP. We did try to eat at one restaurant and all the prices were in CUP. We asked about paying with CUC and they were going to price gouge us. (for example, a soda was usually 1 or 2 CUC....at this restaurant if we paid with CUC they were going to charge us 6 CUC for a can of soda) Needless to say, we went to another restaurant. If you want to eat street food you would need CUP.  Most things for sale for tourists were priced in both CUC and CUP. I was also told you could exchange money at banks, but usually the bank lines were longer than the Cadeca lines.

Insurance: I read several articles that said you were required to have insurance or proof of insurance to go to Cuba. We were told that this was included in the Visa for American Airlines and that was a reason why it was $100 and not $75 or $50 like some other airlines. Just save your airline ticket and Visa forms as proof of the insurance. I thought that sounded reasonable. So that is what we did. We were never asked to show any proof of insurance and nothing happened, so I didn't worry about it.

The Internet: The internet in Cuba is highly regulated. Most Cuban households have access to a Cuban intranet that allows emails in Cuba and a few foreign countries.  For the majority of Cubans, the world wide web is not available from home. In 2015 the government opened up a network of public wifi hotspots. You will see dozens of locals seated along sidewalks using their phones to connect in these areas. The internet is not very fast, but is suitable for checking emails and reading news. You must have a wifi card with a pin. It is only available to Cuban residents. However, many locals will sell you a card. When we walked by these areas, we would have people offering to sell us wifi. You can get on the internet at some of the fancy hotels. and there are internet cafes supposedly. I say supposedly because I never saw an internet cafe. If you plan on using your cell phone. double check that your international plan includes Cuba, many do not. I was told that rates were going to be about $4 a minute on calls originating in Cuba, and at least $1 per text message. There are public phones and you need calling cards for these. You can purchase calling cards. They are priced in CUP, they cannot be used for international calls, only local. But would be good to confirm taxis or casas if you are traveling extensively around the island.

Because of the cost and trouble of getting on the internet, Ryan and I decided to just unplug for the 6 days that we were there. We knew that there would be no google maps or googling of any kind. So we went prepared to be out of touch. I brought our guide books and I had purchased one map of Havana to take along. I also printed all of the email communication that I had while booking our places to stay and our taxis. I printed out google maps of some of the routes we were going to take around Havana and in Vinales. So we had everything we needed to be internet free for 6 days.


Where are you going to stay in Cuba? There are state run hotels and there there are Casa Particulars. The hotels are relatively expensive and you will be staying in a hotel with a bunch of tourists from Europe. The Casa Particulars are a private house and room rental network throughout the entire country. They are owned independently and not run by the state. The rooms are priced from 20 CUC to 40 CUC. We paid 35 a night in Havana and only 30 a night in Vinales. They are licensed and inspected by the Cuban government. In order for a Cuban to rent out a room in their home, they must pay a tax to the government. They also have a list of criteria that must be met such as modern bathrooms, functioning air conditioner etc. All licensed casas display a small blue and white sign near the front door.


Most casas also offer low priced dining options. You can get breakfasts for 3-5 CUC and dinners for 8-10 CUC. You are not required to pay for the casa ahead of time. If you arrive and don't like it, you can leave. If you have not changed money yet, you can stay the night and pay the next day. There are many ways to search for casa particulars on the internet via Air BnB and other agencies. By the way, we were here in Cuba in High Season (December-April) and there were many casas available, even on the weekend. So do not despair if you arrive without something pinned down. There were many available the week of March 14-20 when I was there.

What about the wonderful Cuban food? First off, if you love Cuban food in Miami, that is not really what you will be getting in Cuba. I read one blog and the guy said that he loved Cuban food, until he actually went to Cuba! Part of the problem is that they don't have access to a lot of great ingredients. Spices? you have Salt and you have Pepper. You see lots of Pork and Chicken because that is what is available. Beef is more rare. Most cattle on the island are for Dairy and their Dairy situation is weird too....powdered milk everywhere, but they have a lot of ice cream and ice cream stands. Beef is usually imported from South America, so not so fresh, but ask, at one restaurant Ryan wanted the steak and I asked about it. The waiter said that the beef was from Cuba (this was also one of the most expensive meals we had ....Ryan's Chateaubriand was $15). I love seafood and would often try to order it in restaurants, nope, not today. Out of fish. That being said, we had some really great meals in Cuba. The fruit is awesome. Pineapple, Papaya, Guava, Bananas were all over the place. The bread was pretty good and available everywhere. And the pork was wonderful too. A "traditional Cuban meal" was offered at almost every restaurant and would consist of your choice of meat (Lamb, Pork, Chicken, Beef or Fish) with rice and beans and some salady type thing on the side, cabbage like slaw, lettuce, tomato and cucumber, something like that. It was usually a great deal  being $3-$5 for the plate and often would include a drink as well.

The best meals we had in my opinion were at the ArteChef restaurant in Havana and at the Dulce Vida Restaurant in Vinales. ArteChef is connected to a culinary school. This is where Ryan had his $15 Chateaubriand. I had Fish in a Garlic Sauce. ($8) The sauces for the beef and the fish were awesome and it was one of the most flavorful meals I had in Cuba.

Dulce Vida is an Italian restaurant and they make their own pasta. I had the Lobster with Gnocchi  (for $10) and Ryan had Lasagna. Wonderful.


The best "traditional Cuban meal" that we had was at La Pelota in Havana. We both had pork for $4 each (I tried to order Lamb, but they were out) and you could tell that it had been marinated in citrus, great flavor. As I have said, the problem I found with the food was just that it was bland.

That is all for now, I will blog more later about our adventures in Cuba recreating the 1937 photos I brought from when my Father and Grandmother were there 80 years ago!
Posted by Amanda from Seattle at 4:30 PM

Terrific information!! Thanks for posting this!

What an awesome trip and the connection was incredible. Thanks for blog to read and learn when our turn comes around.