So on August 3rd, I find myself on a layover in Lisbon, Portugal and I thought why not take this opportunity to hike the first 8km of the Camino Portuguese? As many of you know, my boyfriend, Ryan, hiked the Camino de Santiago thru France and Spain in 2012. The Portuguese route to Santiago begins in Lisbon at the Cathedral Se and was used by Queen Isabel of Portugal in the 13th Century, on her pilgrimage to Santiago.   Lisbon is Portugal’s capital and the trail takes you through stunning countryside, villages and towns such as Santarém, one of the last Moorish bastions in Portugal; Coimbra, famous for its 13th century university; and Porto with its riverfront and home of Port wine. I was only doing the first 8 km which was basically a nice walk through Lisbon!

The old town of Lisbon is a warren of tiny streets and cobblestoned sidewalks. Many times I would come to an intersection of 5 or 6 streets and have to really search for the yellow arrows!! But all in all, they were easy to spot and the first 2-3 miles was quite enjoyable because I was still in the more touristy part of the city. 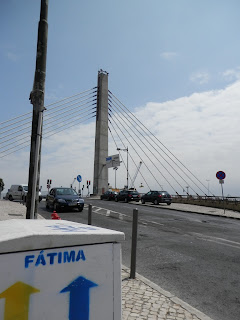 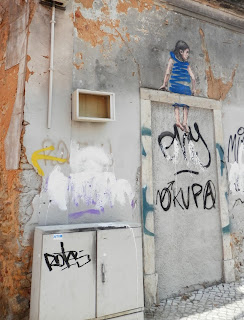 The last two miles of the trek were through more industrial and warehouse/factory type areas. Not very scenic. Also my shoes were giving me problems. I had brand new Keen hiking sandals and they were becoming too tight as my feet swelled with the hiking and the heat. I was developing blisters on both feet and I was concerned about a toenail on my left foot that kept catching on the webbing of the sandal.

I had originally planned to hike all the way to the Vaca de Gamas Tower at the end of Parque das Nacoes, but my feet hurt so much and I had my 5 miles already, I just went to the Metro Station and headed back to my hotel!! Parque das Nacoes was built for the Expo 98. The World's Fair that was held in Lisbon in 1998. So it is an extensive park with a huge aquarium, the observation tower, there is a cable car ride...and the original entrance to the Expo is now a Mall with shops and food court and the Metro Station.

So I have 10 miles under my belt so far....Ryan is doing considerably more on the AT for the next couple of days (he should finish at Katahdin around August 12th) and we have raised over 400 dollars so far for the Washington Trails Association!! Thanks so much to Diane and John and Gwen for their recent contributions.

August is Hike-a-thon Month for me! Please donate a little something to help Washington Trails. Click here to go to my fundraising page or Just copy and paste this link into your web browser: https://www.gifttool.com/athon/MyFundraisingPage?ID=1468&AID=3052&PID=518075
Posted by Amanda from Seattle at 12:00 PM