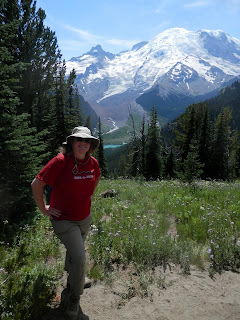 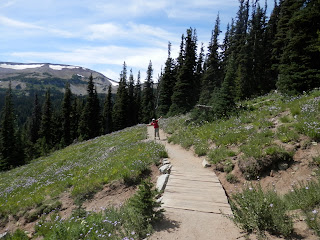 This is not Ryan's first time hiking this trail. He did some of it in 2004 and then hiked the entire trail in 2005. This year he'll be hiking around counter-clockwise and he started from the Sunrise trailhead. I hiked along with him for a while and then returned to the car, so I got in 2 miles for Hike-a-thon. The pictures really do not do it justice. The view of the mountain, the blues of the sky and water, the green trees and all the colorful wildflowers are just amazing. "And live alone in the bee-loud glade" kept running through my mind because the air just hummed with bees among all the flowers.

I had to leave and return to Seattle and work that night. I worked the flight to Philadelphia arriving at 6am and then immediately got on the 7:30 am flight back to Seattle. It was full and myself and another flight attendant had to jumpseat home. This means that there was not a regular passenger seat. There are extra flight attendant jumpseats (from back in the day when we had more crewmembers to do the service on the aircraft. For example. this particular aircraft is worked by 3 flight attendants but there are 5 seats for crew in the cabin) and these seats are available for us to sit on during the flight. It makes the galley very crowded! The other downside is that when I take the jumpseat, I cannot sleep on the flight. By taking the jumpseat, I am essentially an additional crewmember and as such cannot sleep. 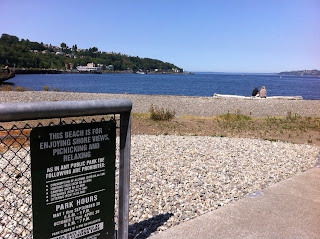 So by the time I got back to Seattle I was pretty much wiped out. But it was such a lovely day, I could not resist getting in some more Hike-a-thon mileage. I was not up for a trek through the woods, but a nice flat stroll along the Alki Beach Trail in West Seattle was just perfect. I started at Jack Block Park. If you have never been to Jack Block Park, I highly recommend it. There is an observation deck that has views of the port and interpretive plaques explain activities at the Port of Seattle and maritime shipping technology. 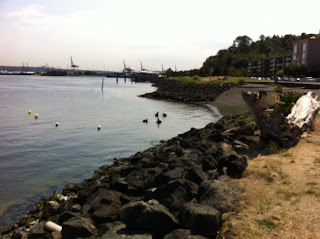 Walking down along the waterfront on the Alki Beach Trail, there is tons of stuff to see. At Seacrest dock, you can often see divers in and out of the water. This is the dock where the West Seattle water taxi arrives. There is Marination Mai Kai restaurant and bicycle and kayak rentals too! 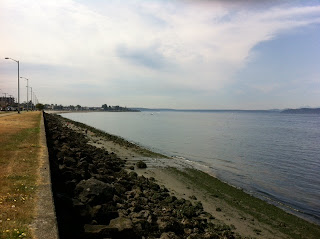 I hiked around Duwamish Head and after 2 miles returned to my car for a total of 4 miles hiked. Thunderstorms rolled it that night and I thought of Ryan out on the trail around Mt. Rainier!

I drove up to Mowich lake on Saturday to meet him. 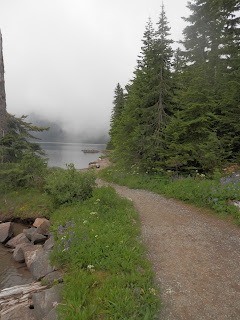 A day with a 40 percent chance of rain, so it looked pretty dreary. I did 3 miles of hiking along the Wonderland trail looking for Ryan, but when I heard thunder again, I headed back to the campsite and tent to wait for him under shelter. He arrived before dark and it mostly drizzled and misted all night. 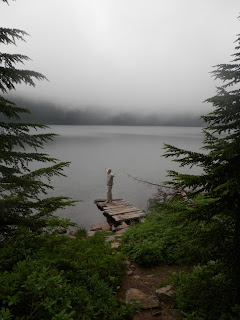 The next morning, we ran into a group of Hike-a-thoners going out to Spray Falls! 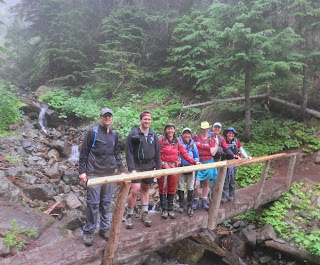 I  hiked another 2 and a half miles along the Foothills Trail in Buckley, WA on my way back to Seattle and another day of work. 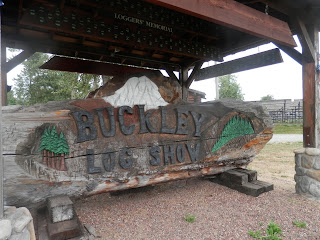 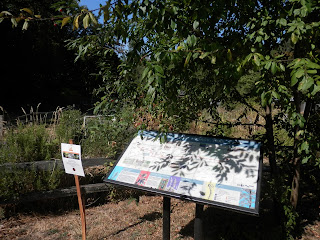 Ryan and I are still asking for pledges to contribute for the protection and maintenance of Washington State Trails. So far we have raised over $1100 and we are well on our way to our goal of $1500. Please consider making a donation, no amount is too small.  Just follow the link posted below. Thanks so much!!

Posted by Amanda from Seattle at 11:17 AM