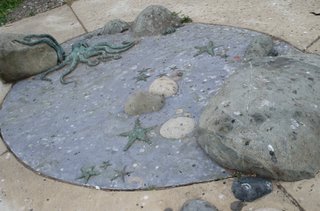 Ryan left early in the morning for Oregon and backpacking the Pacific Crest Trail. Since I was already up and awake, I thought I would go for a walk on Alki and get some mileage under my belt. We hike along Alki because it is easy. It is basically in my backyard. When you leave my apartment and walk straight down the hill towards the water, you hit the beach at Constellation Park. Nice flat beach to walk on for an easy 4 miles for me today!

At Constellation Park, there is a really neat "tidepool" sculpture set in the sidewalk and access to the rocky beach. At lowtide, you can walk along the beach all the way around the point to the Alki Point Lighthouse. At hightide, it is better to walk along the sidewalk. But there is plenty to 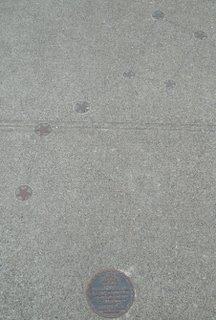 see along the sidewalk. Hollywood has their walk of stars and this is Seattle's walk of stars. However, ours are of the heavenly variety! They don't call it Constellation Park for nothing. Embedded in the sidewalk are diagrams of a dozen or more constellations. From the Big Dipper and Leo to Orion and Scorpius. It's an astronomy lesson at your feet.

Once you round the bend, you reach Alki Beach proper. Sand and firepits, picnic tables and volleyball nets. And a long line of restaurants, bars and coffeeshops. Sunfish: Fish and Chips is my Dad's favorite. Pegasus Pizza is another favorite of ours. Celtic Swell is the local Irish Pub! And Dukes Chowderhouse is where my sister, Alisa, and I had Thanksgiving dinner once.

A monument marks the spot where the first white settlers landed here at Alki in the winter of 1851. They soon left and built their city across Elliott Bay on the less exposed shores of Seattle’s current waterfront.

The first Settlers named this area New York-Alki. New York because I think some of them were from New York and Alki was a native word meaning by and by. Hopefully, this area would be like New York by and by??!! Well, we do have a Statue of Liberty. It is usually standing around here somewhere, but she keeps getting her torch stolen. She is currently off for repairs in Tacoma. After the 9/11 attacks, the statue was a place that people would leave flowers, flags and momentos as a kind of memorial. Hopefully, she will be back soon. 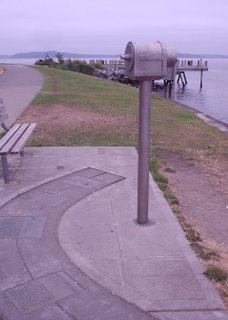 On down the beach is the site of Luna Park. Built in 1907, Luna Park was a seaside pleasure resort like the famous Luna Park on Coney Island in New York. There was a swimming pool, a dancing pavilion and a skating rink. They boasted of having the longest bar on the bay! And there was a thing called the Joy Wheel, The Joy Wheel looks alot like the swings in modern day amusement parks and fairs. There are viewfinders along the walk where Luna Park used to be located. Inside the viewfinder, is an image of the Joy Wheel. So you are looking out over Elliott Bay and you can see the ferry boats go by with the image of the Joy Wheel from 1907 in your eyes. Luna Park closed in 1913 and burned down in the 1930's, but if there is a very low tide, you can still see some of the pilings from when the pavilion was here. The last time that happened there was a huge traffic jam around West Seattle as folks drove over to get a glimpse of the pilings!

All along the walk at Alki there are images embedded in the sidewalk about the native americans, the first settlers and the flora and fauna of the area. And then there are the views of the boats and islands and Seattle with the Space Needle in all its glory. It all combines to make the Alki walk alot of fun. Plus stopping for a Starbucks or a Guiness at Celtic Swell isn't so bad either!

I hiked 4 miles on Alki and then another mile at Lincoln Park. This brings my total for the hike-a-thon up to 25 miles.
Posted by Amanda from Seattle at 8:41 PM