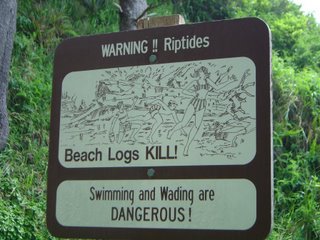 I woke up bright and early to hike some waterfalls. I started with Marymere Falls here near Lake Crescent. Friends, Don and Gwen from Kernville, CA, had been here just a few weeks ago. I then headed to the Sol Duc Hot Springs area. I had never visited this part of the Olympic National Park before and I was curious to see the Hot Springs and there was supposed to be a spectacular waterfall. I suppose I knew in the back of my mind that this was a very popular destination. At one time, Sol Duc Hot Springs was one of the most elaborate health resorts in the country. A half-million dollars was spent constructing the spa, which featured a four-story, 165-room hotel that opened in 1912. In 1916, the roof of the main building caught fire. Strong winds scattered the sparks and within 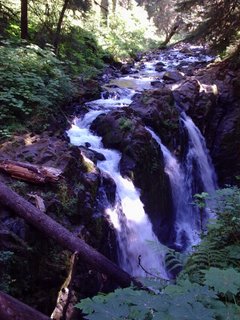 hours the resort burned to the ground. Today's resort is a

small operation in comparison. Legend has it that the hot springs are the tears of dragons! Two dragons had a duel over a boundary dispute and it ended in a draw. They crawled back to their caves and cried tears of mortification.

I was not prepared for the crowds of people who were at the Hot Springs at 10 am on a TUESDAY! I can only imagine how it is during the weekends! The two huge tour buses in the trailhead parking lot should have clued me in. As well as the long line for the ladies pit toilet at the beginning of the hike. It was a traffic jam on the bridge over the waterfall. This trailhead is also a jumping off point for backpacking trips into the interior of the Olympic National Park, so you had Japanese Tourists rubbing shoulders with stinky backpackers 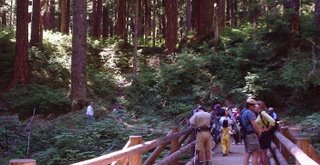 just back from 7 days in the woods. It was something else! I had originally planned to camp at the campground at Sol Duc, but the crowds scared me away and I decided to drive on out to the coast to find somewhere a little less hectic.

When I got out to the beach, it was dreary and cloudy on this side of the Peninsula. But that did not stop me from hiking out to Hole in the Wall. It is about a 3 mile hike round trip and I had timed it perfectly. The tide was low enough to allow plenty of beach to walk on. When I got back to the trailhead, I had to climb over the huge driftwood logs that line the beach. There are always signs warning that “Driftwood Logs Can 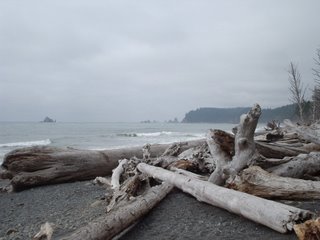 Kill!” And I always thought that this was highly amusing. Until now! I stepped on a log and it shifted underneath my feet and I fell. I hit my head and thank goodness I did not knock myself out! But I was pretty banged up, and I was definitely going to have a black eye.

I decided to call it a day. I went to a new campground that I had never been to before. The Klahowya Campground was very nice along the Sol Duc River and Snider Creek. There was hardly anyone there which was nice after the crowds at Sol Duc Hot Springs. I spent most of the evening with ice on my face hoping that I wouldn’t look too horrible in the morning. 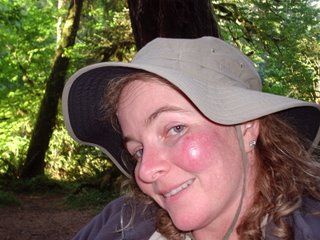 Originally, I was going to spend another night over here, but after my fall, I just wanted to go home. When I woke up on Wednesday morning, I figured that I would start heading back to Seattle. I drove back along Hwy 101 towards Port Angeles. When I got to Port Angeles, Hurricane Ridge seemed to call to me. I had never been up there. Once a long time ago, when my sister, Alisa was here for a visit we tried to drive up there, but there was still snow on the ground then and they required you to have chains to attempt it. We had given up on the idea that time. This was my chance to drive up there. I could even do a short hike up Hurricane Hill for hike-a-thon. It is a lovely drive to the top and very popular, lots of folks up here. And lots of bicyclists! It is about 17 miles up from Port Angeles and pretty much a 7 percent grade the whole way.

I enjoyed the views from the top and then made my way back down towards Seattle. I had a 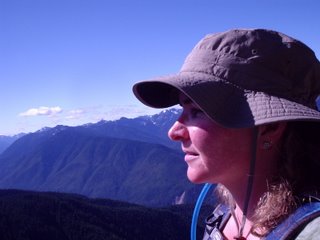 decision to make. Should I take the ferry back to Edmonds, or drive further south along the Kitsap Peninsula and take the ferry directly back to West Seattle? Well, if I went to Edmonds I would be in 5 o’clock traffic through downtown Seattle. Nope, not going to do THAT! So a direct hop to West Seattle looked like the best thing to do. I hiked 6 miles on Tuesday and 3 miles on Wednesday to bring my hike-a-thon total to 40 miles! I hope to get in about 5 more miles before the end of the month.
Posted by Amanda from Seattle at 2:20 PM