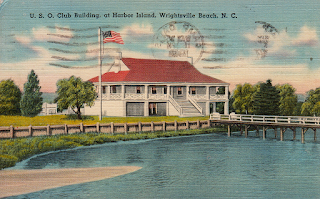 The Wrightsville Beach USO Club opened in 1941. It was said to have the best USO facilities in North Carolina. Service members from Camp Davis, Camp Lejeune, Fort Bragg and many other installations came for dancing, recreation and entertainment. Between 1941 and 1945 this and a few other USO buildings in the Wilmington, NC area ( including a USO club on Nixon Street in Wilmington for African-American servicemen ) hosted approximately 35,000 visitors every week. In fact, Military Cutoff Road in Wilmington was an un-named and unpaved road used by troop convoys from Camp Davis to reach the USO club at Wrightsville Beach and the army had it paved soon after the United States involvement in WWII.

This postcard was postmarked May 26 1943 from  Camp Davis and what is interesting is where it is supposed to have a stamp, it says FREE, so the servicemen got so send these for free! 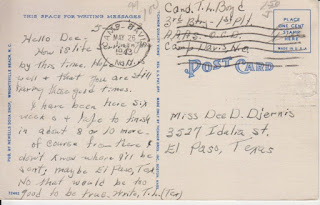 Posted by Amanda from Seattle at 3:56 PM