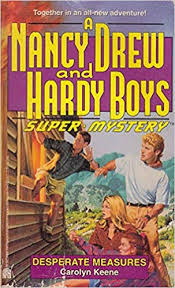 Hurrah, Hurrah, finally a GOOD Supermystery. I was so happy to read this book. Finally there is a super mystery that is a true collaboration between the Hardy Boys and Nancy Drew. This book was published in March of 1994. It starts with Frank and Joe Hardy surviving a hurricane in Florida. The resort where they were staying was owned by a friend and it was built using defective siding and roofing materials. After the hurricane, there is so much damage and one employee is even injured. So the Hardy's decide to reach out to the manufacturer of the siding and see if anything can be done. They keep getting the run-a-round from the company.
Meanwhile Nancy Drew is asked to investigate the disappearance of the father of a good friend, Molly Keegan.  It turns out that Mr. Keegan is a chemist with the company that the Hardy Boys are investigating. So the sleuths end up on the same case. The company is called Tercon and has headquarters in Virginia.  The Hardy's were going to visit with Sheila Wyse, a lawyer for the Consumer Product Safety Commission.  Shelia gets shot and the father of Nancy Drew's friend, Lambert Keegan,  is found standing over her, so of course all the evidence points to Mr. Keegan as the shooter.
There is lots of conflict between Nancy Drew and the Hardy Boys. All evidence points to Mr. Keegan as being the prime suspect. But Nancy trusts her friend and is committed to prove that Mr. Keegan is innocent. The Hardy's are trying to get to the bottom of the Tercon company corruption, so they are focused on that aspect of the mystery.  When Frank and Joe are held at gunpoint and roughed up at the Tercon headquarters, it is Nancy Drew who comes to save them! Next, when Nancy is fighting the bad guys, the Hardy Boys show up to save the girls.
This book has both sets of detectives approaching the mystery as helping out a friend. There are instances where both parties save the other from the bad guys. And both are involved in physically fighting the bad guys. The girls are not just on the sidelines. The Hardy Boys do have access to a "Network" which reeks to me as a lazy author's device to provide information to the detectives. It sounds like they have a team of computer hackers at their disposal. The romance angle is definitely not as bad in other Supermysteries.  Joe ogles some girls on the beach in Florida and Bess has a crush on Molly Keegan's business partner.
My favorite quote in the book is: "I'd say good teamwork solved this case." Page 208.  All in all, I was very pleased with Desperate Measures. It is my favorite Super Mystery so far and it deserves the moniker.

Posted by Amanda from Seattle at 6:01 PM