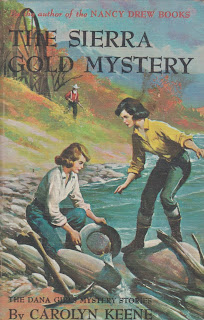 The Dana Girls Books were written and published from 1934 to 1979, the first four books were written by Leslie McFarlane who wrote the Hardy Boys series. Then Mildred Wirt Benson who also wrote the original Nancy Drew books wrote titles 4-16 of the Dana Girls. Harriet Adams is believed to have written the rest of the Dana Girls series.  The Dana Girls are sisters who are orphans and are being raised by their uncle who is a sea captain. He is often away, so they are at boarding school and the first books have lots of mysteries in and around this boarding school setting. The later books are what we call "travelogue" books where the Dana Girls travel to different and often exotic locales to solve their mysteries.

Recently on social media, the later Dana Girls travelogue books by Harriet Adams (writing as Carolyn Keene) have been much maligned. However, I still have a soft spot in my heart for the Sierra Gold Mystery and I will tell you why..... 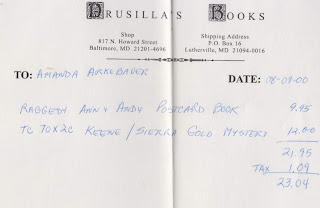 I first bought the book in 2000 from Drusilla's Books in Baltimore, Md. This was a fabulous used bookstore that specialized in children's series books and I would bid Baltimore layovers just to go shopping at this store. I had pretty much completed my Nancy Drew collection of books and I was branching out to collect other girls series books. (although as any collector will tell you, you are never really done collecting...here I am 19 years later!)

In February of 2001, a few of the Phantom Friends - a club of Girls Series Collectors (and some other subscribers to the Whispered Watchword fanzine) got together and went to Jackson, CA (In the middle of Gold Rush Country)  to meet with Muriel Thebaut. Ms. Thebaut had met with Harriet way back in 1961 and provided her with all the local information from California Gold Country that she needed to write the Sierra Gold Mystery.

We visited many of the locations that are mentioned in the book and had a great afternoon learning more about how Harriet Adams came to write the book and we could see the inspiration all around us.


This was really a small impromptu gathering of collectors and not really a convention per se. But it remains in my memory as one of my favorite journeys on my road of collecting Girls Series books.  Getting together with some like-minded friends to learn more about our favorite books.

I will be participating in the Washington Trails Association Hike-a-thon during the entire month of August. Ryan will be hiking the Pacific Northwest Trail from Montana (Glacier National Park) all the way to the Pacific Ocean on the Olympic Peninsula and I will be joining him for a few days and also doing day hikes around Seattle on layovers.I hope I can count on all of you this year for support. Any amount from $1 to $100 is welcome.You can click on this link to go to my WTA fundraiser pagehttps://give.wta.org/fundraiser/2179299or you can send me a check (made out to WTA (Washington Trails Association) or just a dollar in the mail would be very welcome. Thanks so much to everyone who has supported this cause in the past and hopefully again this year!to: Amanda Arkebauer PO Box 16131 Seattle, WA  98116

Posted by Amanda from Seattle at 6:39 PM