More reviews of Nancy Drew and Hardy Boys Super Mysteries, I review these for a Nancy Drew fanzine called The Sleuth, here are two of my first articles about these books.

The True Horror of "Hollywood Horror" 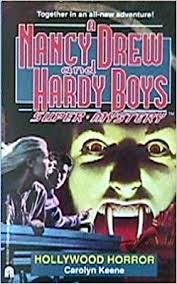 As I settled in to read the Nancy Drew and Hardy Boys Super Mystery, Hollywood Horror, it soon became apparent that even though Nancy Drew had top billing on the cover of the book, she was nothing more than a sidekick for Frank and Joe Hardy. The Hardy Boys are famous enough as detectives to be summoned out to Los Angeles to investigate sabotage at H. G. Studios. The film studio also features an amusement park. Nancy Drew and Bess came along for a vacation and "to get in some sight seeing."   Nancy does find a mystery to solve of her own...sort of. The star of a sitcom is being stalked and the local police can't or won't do much, so Nancy volunteers to act as bodyguard and detective. She has to convince everyone that she is up for the job and the local LAPD only is convinced once she gives them the name of the River Heights police chief as a reference. Notice how the Hardy Boys did not need a reference? Their name alone (and famous father) spoke for them. Oddly, no one in Los Angeles has heard of Carson Drew? But Fenton Hardy is a household name. Nancy has to reassure everyone, "I've worked with the police many times."
As the story wore on, it never got any better. At one point, Nancy "tagged along" with Detective Bolita of the LAPD as he conducted an official search. She uses herself as bait and ends up locked in the trunk of a car and then dangling off the edge of a cliff, waiting for Frank and Joe to come rescue her. As disappointed as I was with Nancy's lack of reknown as a detective, at least she was not lovesick. Bess and Joe were the ones in this story who were always sidetracked by their interest in the opposite sex. Bess becomes involved with an actor and Joe flirts with a tour guide at the amusement park. Frank and Nancy both remain professional.
I was horrified that this book, written in 1994, depicted Nancy Drew as someone who just tagged along on the adventures. The boys definitely are the stars of this show and Nancy was lucky to find a mystery to solve on the sidelines. Frank Hardy consults with lawyers and works with the head of the film studio while Nancy has lunch and shops on Rodeo Drive.  I have not read many Supermysteries or other Nancy Drew files books and now I remember why. I was very disappointed. 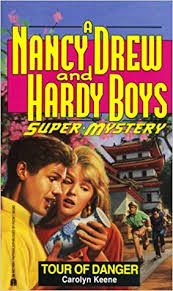 I was so horrified by reading The Nancy Drew and the Hardy Boys Super Mystery, Hollywood Horror. I realized that I had never read these books. So I thought I would read another one and see if it was as bad.  One of the things that bothered me about Hollywood Horror was how Nancy Drew was reduced to sidekick status for the Hardy Boys.   This time I am going to take a look at Tour of Danger.  This book was written in 1992, two years before Hollywood Horror.  It starts out with Nancy and Bess getting ready to go on a vacation to Tokyo.  Nancy makes it known that this is just a vacation and that she is not going to Tokyo to solve a mystery.  Why not? What is so bad about a world class amateur sleuth being prepared to solve a mystery, even on vacation? One of the first things that the girls see when they arrive in Tokyo, a city of nine million people, is Frank and Joe Hardy leaving an office building. This while the girls are stopped at a traffic light. Yeah, but don't think that that is going to be the last crazy coincidence in this book!
Of course, Frank and Joe are here in Tokyo on official business. They are going undercover at an electronics firm to solve the mystery of how counterfeit electronics are being substituted for the real ones at the Amsa Electronics Company.  They have the backing of the owners of the company for their sleuthing.
Of course, Nancy immediately finds a nice simple mystery to solve. She is trying to figure out how a pearl smuggling ring is using tourists as their mules to smuggle pearls into the United States.  I was annoyed in Hollywood Horror when everyone called Nancy Drew, "Nan" and they do it again in Tour of Danger.  Ugh, every time I read that nickname, it is like nails on a blackboard.
Both Nancy and the Hardy Boys break some laws to solve their mysteries. Nancy uses a lock picking set to break into hotel linen closets and the Hardy Boys trespass and break into a warehouse.  Nancy is the one who realizes that the electronics case and the pearl smuggling case are related by having the same suspects in the Japanese underworld.
Action is provided by both groups having their rooms ransacked. Frank and Joe are victims of a car bomb.  It is mentioned that Nancy has trained in karate, although we never see her use any of the skills learned. Frank and the bad guy get into a knife fight.  Nancy does get knocked unconscious and is drugged and it is Frank and Joe who must save her.  Frank breaks his case by his computer hacking skills and he steals a vase to help Nancy solve her mystery.
Joe and Bess are once again depicted as love sick and ready to fall in love with the first person they see on a case. At least Nancy and Frank are portrayed as all business when it comes to solving mysteries. Nancy has to put off the attentions of an admirer and it is made clear from the beginning that she has Ned Nickerson waiting for her at home.
The descriptions of Tokyo and all the tourist places that the quartet visit are very interesting. If you are a fan of the travelogue Nancy Drew books, you will enjoy this book for that aspect. However, if you are expecting a strong female heroine, who does not need a man to get her out of a tight spot, the Super Mysteries are sorely lacking.


On another topic, I will be participating in the Washington Trails Association Hike-a-thon during the entire month of August. Ryan will be hiking the Pacific Northwest Trail from Montana (Glacier National Park) all the way to the Pacific Ocean on the Olympic Peninsula and I will be joining him for a few days and also doing day hikes around Seattle on layovers.
I hope I can count on all of you this year for support. Any amount from $1 to $100 is welcome.
You can click on this link to go to my WTA fundraiser page
https://give.wta.org/fundraiser/2179299
or you can send me a check (made out to WTA (Washington Trails Association) or just a dollar in the mail would be very welcome. Thanks so much to everyone who has supported this cause in the past and hopefully again this year!
to: Amanda Arkebauer PO Box 16131 Seattle, WA  98116
Posted by Amanda from Seattle at 5:30 PM