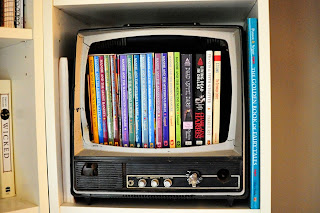 The Diplomat and the Gold Piano by Margaret Scherf  Margaret wrote a Nancy Drew book as Carolyn Keene (The Secret of the Wooden Lady, 1950) and this was one of her own books featuring adult sleuths, Emily and Henry Bryce who are decorators and provide the Gold Piano in the title. It was a fun read obviously written in 1964 and you get a very "Mad Men" feel from it.
The Stranger by Harlan Coben (library) great thriller, one of his best. lots of twists and turns
At Home in Mitford by Jan Karon (audiobook) listened to while driving around Appalachia
A Proud Taste for Scarlet and Miniver by E.L. Konigsburg well this was an excellent way to learn about some English History. The life of Eleanor of Aquitaine. I still have a bunch of books by Konigsburg to read, but I have been enjoying them all.
The Life Changing Magic of Tidying Up by Marie Kondo (library) inspired me to get rid of several boxes and bags of stuff, but I still need to weed through my clothing again!!
The Clue in the Crumbling Wall by Carolyn Keene reading this to prep for my Nancy Drew convention in Iowa at the end of the month.
Something Rich and Strange by Ron Rash (library) loved this collection of short stories mainly set in Appalachia this author wrote Serena which I enjoyed.
Never Turn Your Back by Margaret Scherf This one was written in 1959 and Reverend Martin Buell, an Episcopalian minister in Montana is the sleuth.
The Black Box by Michael Connelly (audiobook) listened to this one while driving from Asheville, NC to Damascus, VA and all around the AT in Virginia while doing Trail Magic for Ryan
The Bankers Bones by Margaret Scherf This book features Dr. Grace Severance as the sleuth and is set in Arizona. Dr. Severance is a retired pathologist. This was my favorite of the Scherf books I read this month.
Father's Arcane Daughter by E. L Konigsburg Yuck, my least favorite of Konigsburg's books so far and it seems this one was made into a Hallmark movie called Caroline. It was okay, but I would not rave about it.
What Came Before He Shot Her by Elizabeth George (audiobook) such a depressing story, but I loved the idea of this book. It takes what happened in George's previous book With No One as Witness and sees it from another angle. Really fascinating. Reminds me of exercises we would do in creative writing class. (like write about a car crash from the driver's point of view....now write the same crash from the point of view of a woman walking her dog along the road)
Scarlett Slept Here: A Book Lover's Guide to the South by Joy Dickinson Bought while I was tooling around the VA mountains. And there was not much about Virginia in it unfortunately.
Nameless Night by G. M. Ford Ford's version of Bourne Identity
The Secret of the Spotted Shell by Phyllis A. Whitney a childhood favorite that I liberated from a thrift shop in the mountains of Virginia.
The Goodbye Body by Joan Hess I really like her Maggody series, which I think is more fun than this series.  This one is a "Claire Malloy Mystery" and Claire is a bookstore owner.


Posted by Amanda from Seattle at 4:17 PM