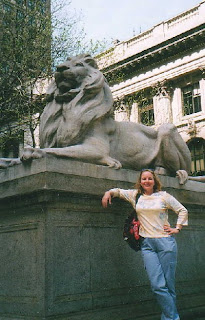 This photo of me is in front of the New York Public Library in Manhattan. I was there in 2003 for a Nancy Drew convention and we visited the Stratemeyer Archives at the library. Lots of interesting information about the creation of the Nancy Drew series and many other children's books by Edward Stratemeyer.

As most of you know, I was participating in the WTA Hike-a-thon during August and I spent a lot of time hiking, when I might have been sitting around reading! A BIG THANK YOU!! to everyone who donated for Washington Trails. Anyway, here is what I read in August:


Bimbos of the Death Sun by Sharyn McCrumb
The Masque of the Black Tulip by Lauren Willig
The House at Riverton by Kate Morton (library)
Nothing Daunted: The Unexpected Education of Two Society Girls in the West By Dorothy Wickenden, (library)
Assassination Vacation by Sarah Vowell (audiobook)
The Red Door by Charles Todd
Paths of Glory by Jeffrey Archer (audiobook)
The Watery Part of the World by Michael Parker (library)
Unfamiliar Fishes by Sarah Vowell (library)
Divergent by Veronica Roth (library)
Royal Blood by Rhys Bowen
Untold Story: A Novel by Monica Ali
The Memory of All That by Katharine Weber (library)
Payback at Morning Peak by Gene Hackman (library)
When the Killing's Done by T. C. Boyle (library)
Zombies of the Gene Pool by Sharyn McCrumb
Darker than Amber by John D. MacDonald (library)
Postern of Fate by Agatha Christie
The Tale of Halcyon Crane by Wendy Webb (audiobook)

Bimbos of the Death Sun is a fun murder mystery set at a ComicCon style convention for SciFi/Fantasy fans. I have read this book several times (and the follow up, Zombies of the Gene Pool) and love it every time.

The Masque of the Black Tulip is a continuation of the Pink Carnation series that I started last month. The action moves along during Napoleon's time, but the present day story is yet to be resolved. I will have to read more books in this series to find out what happens to our modern day heroine!!

The House at Riverton was really good. I had watched Season One of Downton Abbey and loved it and this book is very reminiscent of that TV show. The book concerns a great house in England during the time between WWI and WWII. The Upstairs/Downstairs aspect of life was coming to an end with the advent of WWII.

The Assassination Vacation by Sarah Vowell was great fun and I think I liked it better than her book about the Pilgrims that I read earlier this year, "The Wordy Shipmates".
Assassination Vacation was about her road trip to see sites relating to the murders of presidents Lincoln, Garfield and McKinley. Ryan and I had been to many of the Lincoln sites and I was able to relate to the tourism aspect of poking around cemeteries and whatnot. Plus I learned a bunch about Garfield and McKinley that I was not aware of before! I think Garfield is now my favorite president. Just because he loved to read and he made a wonderful commencement speech at a college graduation extolling the value of leisure time!!! What a guy! I listened to this as a book on tape because I was spending so much time driving to trailheads this month for the Washington Trails Hike-a-thon. Sarah Vowell reads the book and her voice is high and squeaky like David Sedaris. Sometimes I would think it was an 8 year old girl reading to me! I wasn't sure I would enjoy it, but like David Sedaris, her observations were often quirky and fun, so it turned out alright.

The Red Door by Charles Todd, first of all, Charles Todd is a mother and son who write these books together. They are set in the aftermath of WWI, the same time period as The House at Riverton and the Royal series by Rhys Bowen. So I have been reading tons about that time period in England. The protagonist of The Red Door is Ian Rutledge who has returned from the war and is plagued with "shell shock" We get to see how this is effecting him, his personal life and his job (he is a police inspector). And these Charles Todd books are mysteries, my favorite, if you haven't figured that out already.

Nothing Daunted was great fun. Two society girls from New York State travel to Colorado to teach school. It is a true story and a wonderful look at that time in the "wild west". (early 1900s) I think the author did a great job of bringing this story to life. It could have been really dry and boring. It reminds me of bits of the Anne of Green Gable series when she goes off to teach school in those small one room school houses.

Paths of Glory by Jeffrey Archer is the tale of George Mallory, the mountaineer who may have summited Everest before Hillary. It is a fictionalized account of Mallory's life and what led him to Everest. I listened to this one as a book on tape, while driving to trailheads for hike-a-thon this month.

The Watery Part of the World, I thought I was going to like this one, it is set in NC along the Outer Banks and has some interesting true history interwoven into the story, and it is pretty compact, around 250 pages. But I just could not get interested in the characters. The only reason I even finished the book and did not throw it down was it was the only thing I had to read on my flight to work the other evening. It was this or the USAirways magazine and the USAirways magazine only occupies me for about 30 minutes and that is if I do the suduko. So I do not recommend it. (this book or the USAirways magazine!)

Divergent by Veronica Roth was a great YA book, much like the Hunger Games. So I can't wait for the next ones in this series. I must say, I liked the Hunger Games series and this, Divergent much better than Twilight, maybe because not so much romance --although there is a little bit of romance, but Twilight was just all about Edward and how gorgeous he was all the time, Ugh--that got old fast. These definitely have more "girl power" in them.

Royal Blood by Rhys Bowen: Another of the Royal series by Rhys Bowen, this time Georgie is in Transylvania! Vampires?! Now I have to wait for Ms. Bowen to finish another book as this is the last of the series to be published!!

Untold Story: A Novel by Monica Ali is a fantastic premise, what if Princess Diana faked her death and has been living a normal life in the USA after plastic surgery? I totally enjoyed it and highly recommend it.

Unfamiliar Fishes is another book by Sarah Vowell, this one is about Hawaii from the time the missionaries arrived to annexation by the USA. Very funny and interesting and I learned a lot of the history of Hawaii that I did not know before!!

Payback at Morning Peak by Gene Hackman, Yes, THAT Gene Hackman, "American Film Icon" as it says on the back of the book. If you like westerns, you will enjoy this one. It is a classic formula western. But nicely done. It did not suck (my new catch phrase)

When the Killing's Done by T. C. Boyle was a good book too. Environmentalists clash over the Channel Islands off the coast of Santa Barbara. This is fiction and I just love Boyle's descriptive passages. She was describing a ship wreck in the beginning of the book and it was making me seasick just reading it!! The colors of the landscape, the smells, sounds, the feelings in the air are all made very real by his prose.

The Tale of Halcyon Crane is a ghost story and very spooky. Lots of hours in the car this month back and forth to trailheads! :-)

Only 19 books read this month, but I hiked 50 miles, went on my first ever backpack overnight and raised $1250 for the Washington Trails Association.


Posted by Amanda from Seattle at 4:26 PM

Thank you, Amanda for lending me "Assassination Vacation". It has the rare quality of being highly educational and hilarious at the same time. I will read more of Sarah Vowell's books (rather than in audio form as her voice really does distract!

For a real treat, go to amazon.com (http://www.amazon.com/gp/mpd/permalink/m2HIC9CDLXLM0Y/ref=ent_fb_link) and watch her incredible video about another of her books, "Unfamiliar Fishes"

I loved Dounton Abbey and we read The House at Riverton at book club - loved that one too! - Deirdre