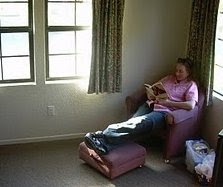 A photo of me reading while on vacation at Warner Springs Ranch in California last year.

The books I read in September:


Miss Peregrine's Home for Peculiar Children read a lot like a YA novel. (I saw it in Barnes and Noble in the Young Adult section, so I guess it IS a YA novel!!) Young Boy adrift... his parents don't understand him, his grandfather ( who he idolizes and loves) dies under mysterious circumstances and he must find the truth of what is going on and in the process discovers things about himself ( strengths that he did not know he had, etc.) It is totally set up for sequels also. I would love to find out what happens next.

Pretty Little Liars, more YA, this one was made into a TV series and is the start of a series of 8 books. I don't know if I will read more of them....maybe. And I don't have any interest in seeing the TV show either.

Want to go Private? Again with the YA theme (Young Adult for those who have been wondering what YA means). This one is every parent's nightmare, and pretty disturbing to read if you have kids I imagine. From the point of view of a 14 year old with poor self esteem. She is groomed by a pedophile in an online chat room and ends up running away from home with him. A formerly straight A student, supposedly the Smart One in the family. Want to Go Private tells the whole story from the young girl's seduction by the pedophile to her friends and family feeling guilty for not seeing the signs that she was vulnerable to this kind of predator. Very serious subject matter, I would think great for book clubs and moms to read with their daughters (and sons).....

Buried Prey is the latest in the Lucas Davenport series by John Sandford. If you read these, you know that Davenport is now in his 50's and has a wife and a couple of kids. So it is getting kind of odd having him run around on no sleep, beating up the bad guys and then have him come home in time for dinner with the wife and kids. Sandford solves this problem by having most of this book exist as a flashback to Davenport's early days on the police force when he was the kick-butt king and a crazy womanizer to boot. The Prey novels are generally about serial or spree killers and this one is no exception. The bodies of two young girls are found, that had been buried for 20 years. Davenport was a young cop on the case 20 years ago and was never satisfied with the outcome of the case. Now he gets the chance to revisit the crime and finally solve all the loose ends to his satisfaction, running down the serial killer who got away with it.

State of Wonder by Ann Patchett is about a researcher who dies in the Amazon and his colleague who goes searching for the truth about his death. The research team in the Amazon has found a tribe of women who never go through menopause. They continue to have babies into their 60's and 70's. A major drug company is funding the project to study this tribe and find the secret to their fertility. The project is shrouded in secrecy and the head of the research team never wants any contact with the outside world, other than taking the money that the drug company provides for their work. This book reminded me a lot of stuff like Hot Zone by Richard Preston or some of Michael Crichton's stuff. So if you like that kind of thing, you might pick this one up.

The Summer of the Bear is the story of a family whose diplomat father dies mysteriously during the Cold War. They have retreated to the mom's childhood home on a lonely island in the Hebrides. It was kind of depressing. Lots of stark, cold war imagery and their retreat to a remote Scottish Island does not bring them together after the death of the father, but seems to isolate them from each other as well as from the rest of the world.

InZanesville, was one of those books where I did not want it to end, I just wanted to go on living in that world that the author had created. It is a coming of age story, much like Are you there God, It's Me Margaret. Just a slice of 1970's life in a small town in Illinois from the eyes of a 14 year old girl. I loved it and am going to read more by this author. Maybe it spoke to me because I was that age in the 70's? There is a nice Nancy Drew reference for you Nancy Drew fans!!

Stories I Only Tell My Friends. I had been waiting to read Rob Lowe's memoir ever since I read an excerpt in Vanity Fair Magazine. Quite enjoyed it and now have to dig out my DVD's of About Last Night, Outsiders, Oxford Blues and St. Elmo's Fire

Lost in Shangri-la is another story of WWII survival. Very entertaining. A group of WAC's and service men on an aerial sightseeing tour over the New Guinea jungle crash and there are only 3 survivors. Their story of their encounters with the native tribes (known for their violence) and their rescue by paratroopers (FilipinoAmericans!) is the basis of this book. There are lots of great photos of these true life events.

Madame Bovary, a favorite classic that I have already read a couple of times. This translation by Lydia Davis is very nice. If you are a fan of the book you should definitely try this translation.

Mockingbird is a biography of Harper Lee. I found it interesting. I might be the only English Major in the world who doesn't love To Kill A Mockingbird. I think it is okay, but not something that I want to read again and again. Not that fond of the movie either.

Deadly Housewives is a collection of short stories by mystery writers, featuring housewives. Some of my favorite writers are represented. Sara Paretsky, Nevada Barr, and Nancy Pickard

The Year We Left Home is a nostalgic novel. Great for those of us who have Protestant Work Ethic and Guilt about leaving our hometowns and doing something different than what our families expected. It follows a Lutheran, Iowa farm family from the 1970's til present day as the siblings grow up, change, move away, stay at home, and deal with their family. I enjoyed it because I identified with it.

George Pelecanos writes thrillers/mysteries set in the Washington, DC/Baltimore area. He is most famous as a writer for The Wire on HBO. I like his stuff and read it from time to time. This one had a great mystery and features an alcoholic detective in DC.

The O Henry short story collection was great, it contains The Gift of the Magi which is always a favorite and of course we love O Henry because he is from North Carolina!

Going along with my theme of reading English WWI-WWII era fiction here is another one. The Return of Captain John Emmett is a mystery set in Post WWI England. I'm only part of the way through and will finish it tonight. For fans of Ian Rutledge and Maisie Dobbs, you might want to put this one on your list as well.

19 books read (reading)
Posted by Amanda from Seattle at 6:11 PM

I like the idea of blogging all the books I've read. I don't read nearly as many as you... and I've tried to keep track before. May just have to steal your idea for 2012!