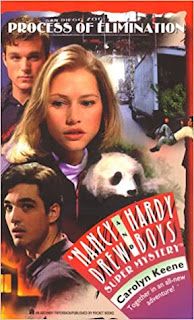 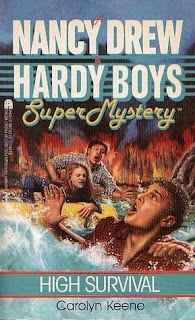 I am usually super disappointed with the super mysteries, but they do have their fans and I have asked for feedback as to what were your favorite super mysteries so that I can see if I like them any better than the others. So two of the fan favorites are High Survival and Process of Elimination.
High Survival was published in 1991
Nancy and George are on a wilderness survival course. We are told that Frank and Joe Hardy were supposed to come also, but did not get their applications in in time. A group of other kids in the course are from a private high school near Chicago. Nancy says, " We are from near there too."  The kids recognize Nancy Drew as a detective. They know that she and the Hardy Boys solved a diamond theft case.
When sabotage starts happening, Nancy calls Frank and Joe and asks them to follow the group into the wilderness. There is a lot of action in this book. Nancy and George get to prove that they are just as competent in the wild as any boy would be.  The mystery itself starts to get a little wild and I had to suspend belief near the end of the book when they build a raft from logs and a tent while a forest fire is raging so that they can ride the rapids to safety.  I had no problem with Frank and Joe dangling from the skids of a helicopter like something out of a Mission Impossible movie, but when they build a raft from a tent, I had to draw the line!
Nancy was represented well in this book and was on equal footing with the Hardy Boys. There was not a lot of romance in the book either, so I will agree that High Survival is one of the better super mysteries.
Process of Elimination was published in 1998 and is the last of the super mystery books.  It starts immediately with a murder and gun play factors in much of the book. Both Nancy Drew and the Hardy Boys are shot at and involved in shootings! Nancy and Bess are attending an environmental conference and the Hardy Boys are on vacation while their father is attending a security convention.
Bess gets a concusion and is in the hospital for much of the book, so it is just Nancy Drew and the Hardy Boys solving the mystery. Nancy tricks a forensic police officer into letting her see him match a bullet and Frank breaks the speed limit while driving through a deserted neighborhood.  Frank, Joe and Nancy are trapped in a burning warehouse and all work together to save each other.  Both Nancy and the Hardy Boys call their fathers for help on this mystery. Both books had a lot of action, I could totally see them filmed as TV episodes and romance was not a priority. Nancy Drew and the Hardy Boys were portrayed as equals, with the girls and the boys doing the same amount of sleuthing.
The detectives work together as equals, romance is not a huge factor, and is only used to further the plot so I can see why these books are fan favorites.


Posted by Amanda from Seattle at 5:47 PM