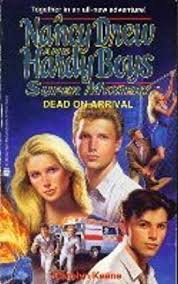 Dead On Arrival is a Super Mystery that was written in 1995. It capitalizes on the popularity of "Emergency" style tv shows involving Emergency Medical Technicians and combines it with the horror genre of body snatching. Bodies are being stolen from rescue squad ambulances and Frank and Joe Hardy have been asked by Chief McGinnis of River Heights to go undercover to try to foil the thieves.  In River Heights, they are staying at Nancy Drew's house and enjoying Hannah Gruen's cooking, while Nancy and Ned try to enjoy a candlelight dinner on their own.
Bess and George are away with their parents on vacation, so they do not make an appearance in this story, instead, we have Brenda Carlton. Brenda is an investigative reporter and a rival to Nancy. Brenda comes to Nancy to get her help in finding a missing reporter named Pam Harter. They need to find out what Pam was investigating and hopefully find her before it is too late. Brenda is a spoiled, annoying version of Penny Parker. Her father owns the newspaper and she just puts her nose into everyone's business, jumps to conclusions and throws her weight around with no consideration of consequences.
This book contains all sorts of clues as to the location of River Heights.  Pam Harter dates an architect who lives in Chicago. When Pam is found dead at a construction site that her boyfriend was working on in River Heights, he becomes a prime suspect.  Blaine, the boyfriend, was supposedly waiting on Pam at a restaurant in Chicago at the time of the murder. We find out that it is an hour and a half drive from River Heights to Chicago.  At another point in the story, after Nancy and Ned have been investigating at the restaurant in Chicago, it was only 2 hours later that they arrived at her house in River Heights.
They discover that Pam was investigating Margaret Cavallo, a state representative who is considering running for governor.  Cavallo's brother was one of the bodies stolen from a rescue squad ambulance after he died in a car crash.  So now the body snatching and the murder of Pam Harter are related.
Both Nancy and Ned and Frank and Joe Hardy get chloroformed by the bad guys. Frank and Joe try to rescue Nancy and Ned, but also get captured. Can Brenda Carlton, the obnoxious nosy reporter save the day? I will let you read the book and find out.

Posted by Amanda from Seattle at 9:35 AM