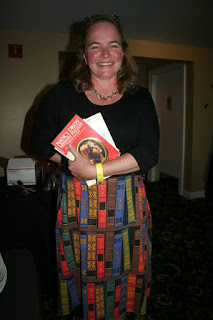 Desert Queen by Janet Wallach (lbrary) The story of Gertrude Bell who in the early 1900's traveled all over the middle east and was instrumental in negotiating with Bedouin tribes and putting King Faisal on the throne in Iraq. One of my favorite quotes from the book is from an Arab chief, who considers women inferior to men and says of her, "if the women of the Anglez are like her, the men must be like lions in strength and valor. We had better make peace wtih them."
Louisa May Alcott: The Woman behind Little Women by Harriet Reisen (audiobook) I really enjoyed listening to this one in the car. I learned a lot about Alcott and her family (although I had been to Orchard House before!)
Processed Cheese by Stephen Wright (library) I wanted to like this one more, but it just did not do it for me. It is a satire about consumerism....I have read Carl Hiaasen that do it better.
The Longing for Less by Kyle Chayka (library) I enjoyed this one, about Minimalism and our current obsession with it. Spurred by the Marie Kondo movement. But he traces the roots of minimalism thru architecture and art and sound. Very interesting.
Wild Horses by Dick Francis Murder and a movie made about horse-racing. I really enjoyed the movie set location for this mystery.
The Language of Baklava by Diana Abu-Jaber (library) a memoir from a girl who has a Jordanian father. I was reading it for my Jordan trip. It is really good and has great things to say about how food makes us feel at home.
Hope in the Mail by Wendelin Van Draanen The story of how Wendelin became an author and her keys to a writing life.
A Spy in The House by Y. S. Lee (library) start of a series about a young girl thief who is trained to be a spy in 1800's London. This might be considered YA fiction. It was a fun read and I will be reading more of these when I can get them from the library again.
Silent Spring by Rachel Carson believe it or not, I had not actually read this book before! Published in 1962 and really has so relevance even today.  I highly recommend.
The Edge by Dick Francis A Train ride across Canada for Horse Racing enthusiasts and of course there is murder.
The Seashell on the Mountaintop by Alan Cutler part of my latest obsession with paleontology and geology. This is the story of Nicolaus Steno who first looked at the fossil record and decided to not continue with the idea of what the Bible and the church considered the age of the earth. He is basically the father of the science of geology.
Fast Times at Ridgemont High by Cameron Crowe The book that the movie was based on. Cameron Crowe was 22 when he went back to high school for a year to find out what really goes on with kids in high school.
Trudge by Lori Oliver-Tierney 50 year old Tierney decides to hike the John Muir Trail and this is her story. It was pretty good (I thought it better than Wild for sure)
The Victory Garden by Rhys Bowen (library) I enjoy the mystery series by this author so I was excited to see a stand alone novel by her. Set during the war
This Tender Land by William Kent Krueger (library) I just read Nickel Boys by Colson Whitehead and this was very similar to me. Instead of black boys in 1960's Florida, we have Native Americans in 1930's Minnesota. And the Native American story is a bit diluted by the two main protagonists being two white boys at the Indian School, however I really enjoyed it.
Murder in Mesopotamia by Agatha Christie I was trying to get into the mood of the middle east and really enjoy Agatha Christie's murders that are set in that area.
Bad News Travels Fast by Gar Anthony Haywood  Cute mystery about a couple who are retired and living out of their RV to avoid living with their adult children. Fun
Sole Survivor by Dean Koontz I was actually looking for the Dean Koontz about the Virus and that one cannot be found for love nor money, so I settled on this one about the aftermath of a plane crash. I have decided that I should not be reading depressing books at this time and I need more light hearted fare.

Posted by Amanda from Seattle at 10:49 AM