There are 36 Super Mystery Books, so I still have more to read and review! 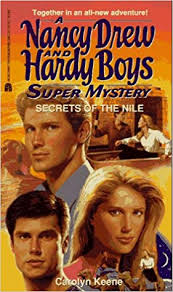 Frank Hardy calls Nancy Drew and asks for her help. He wants her and Bess to join him and Joe in Egypt. They will need to pose as newlyweds! Someone from the State Department has contacted Frank and Joe and asked them to take the place of newlywed brothers who have been threatened with kidnapping by a terrorist group.  The Addisons are one of the richest families in New York and the State Department is going to make fake passports for the Hardys and track the couples in an attempt to foil the terrorist kidnappers.

Of course, Nancy and Bess go along and they quickly grab a flight from Chicago to New York to meet up with the Hardys and continue on to Cairo. Immediately on arrival in Egypt, their rooms are ransacked. When they try to contact the State Department, there is no record of the agent who contacted them  and there is nothing to show that they are working for the government! Either they are disavowed like some Mission Impossible Ethan Hunt OR they have been set up.  They discover that the Addison brothers are not even married and all clues point to the entire trip being a set up, but for what? And so much money was spent, first class tickets, spending money, new wardrobes for the guys and the girls, what could be so important to justify all this expenditure just to get the Hardys and Nancy Drew to come to Cairo?

Nancy and Bess meet a woman who is trying to find her daughter.  Reminds me of Not Without My Daughter (which was a movie in 1991).  The American woman suspects that her ex-husband who is Egyptian has kidnapped their daughter and brought her to Egypt. Nancy and Bess decide to help her find her daughter.   Frank and Joe get into a knife fight and are arrested. Joe breaks into a warehouse using a credit card to jimmy a door lock. Nancy gets knocked unconscious.  They are threatened twice to stop investigating why they were brought to Egypt.

Nancy is always prepared and manages to have a McGyver handbag, which has a flashlight when needed, scissors when needed etc.  Nancy and Joe work together to defuse a bomb. There is a lot of romance between Nancy and Frank, since they are pretending to be newlyweds and often have to act like they are married. But in the end, they agree that they actually love other people and are just great friends.

I enjoyed the travelogue aspect of the Secrets of the Nile. The fact that the bad guys brought the Hardys and Nancy Drew to Egypt and then they threaten them and don't want them in Egypt is pretty ludicrous to me. This has happened in other Supermysteries where the bad guys are the people who actually bring the detectives into the story. I do not understand. Why?  The two mysteries, the "not without my daughter" story line and the "kidnapping terrorist" story line of course come together in the end and are intertwined.
Posted by Amanda from Seattle at 6:07 PM