I write reviews of Nancy Drew books for a Fanzine called The Sleuth. I am going to post some of my reviews here for everyone to see. These have already been published in the fanzine. 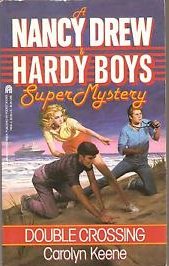 This Super Mystery is significant because it was the first of the Super Mysteries published in 1988.  It starts the series with the idea that Nancy Drew is on vacation and trying NOT to be involved in mysteries. I find this very disturbing. This is not what we expect from Nancy Drew. The traditional Nancy Drew was always ready to solve a mystery and would pursue a mystery over any other thing in her life.  So long Nancy Drew Detective and hello Nancy Drew Luxury Cruise Passenger. Warning, there will be spoilers in this review.
Frank and Joe Hardy have been hired by a cruise line to solve the mystery of thefts aboard the ship. Nancy is on the ship as the guest of George Fayne. George has a job as a social director onboard the ship. This is a 5 day Caribbean cruise from Miami to Cozumel, Mexico. On page 6 of the book comes this quote, "She'd leave the detecting to the Hardy's and concentrate on relaxing."  Yuck.
Immediately they  try to set up a romance between Nancy and Frank Hardy, despite the fact that Frank has a girl friend, Callie Shaw and Nancy has a boyfriend, Ned Nickerson. I guess they are supposed to be "star-crossed" lovers.  So there is lots of time devoted to how Nancy will not spend time alone with Frank or how she is so attracted to Frank.
Oh, wait, we are reading this book expecting a mystery....Okay. There are a group of young people onboard the ship who are the children of diplomats. We are told that that is code word for children of CIA operatives. The kids can't tell you what their parents do for a living. Everything is a secret.
Nancy overhears that someone is going to sell American secrets that are on a disk. When she goes to the ship's captain, the Hardy's have to vouch for her. "She is a good friend and a great detective." This just makes me crazy, that Nancy Drew is not known for her own accomplishments at this point in her career, the Hardy Boys have to vouch for her, really?
Joe gets thrown overboard, but is immediately rescued. Joe Hardy was thrown overboard from a cruise ship into the ocean.  Yeah, that was crazy.
Nancy and Frank go swimming at night even though the pools are supposed to be closed. Bad role models, breaking the rules. But that is how Nancy discovers a dead body in the pool.
Nancy gets knocked unconscious, but then so does Frank.  Nancy figures out the Hardy's mystery. The thief is a woman because a note was written in eyeliner pencil, not crayon as the Hardy's assumed.
All in all, I was very disappointed in this super mystery.  This is not the Nancy Drew that I want to be like. She was more interested in romance than in the mystery. During her time in Cozumel, she wandered around the ruins complaining of the heat. (Of course, this is what I would do, but I hold Nancy Drew to a higher standard.) The denouement comes when the bad guy has Nancy held captive and just tells her everything that he did, and then the Hardys rescue her.
To sum things up, this is not a super Super Mystery. 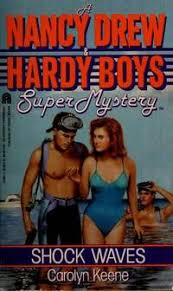 One of the very first super mystery books, written way back in 1989, Shock Waves combines the Nancy Drew Files and the Hardy Boys Casefiles stories. Heavy emphasis is on romance and college fun (the characters are all at Padre Island, Texas for spring break).  The melted keys, that Joe Hardy keeps as a memento from the car bombing that killed his girl friend, Iola Morton in the first Hardy Boys Casefile, are incorporated into the mystery here.
Neither Nancy Drew or the Hardy Boys seem that interested in actually working on a mystery. Lots of scuba diving, beach volleyball and eating out at restaurants happens for much of the book. Even in the midst of searching for a missing person or investigating stolen jewelry, they have time to stop off and eat or go on a ride in a cigarette boat.
Two things that struck me as interesting in this book were that fajitas and jet skis were "new". The author goes into great detail about both of these items. They have fajitas at a restaurant and the local Texans can't believe that these folks have not seen them before! And the jet ski is described as "what looked like a motor scooter on skis". Today we are more used to the sit down style jet ski and you might not even remember that there used to be a stand up version for only one rider.  Yamaha and Kawasaki still produce stand-up designs, although the sitting models tend to be more popular. Most models of jet skis now include an emergency shut-down clip or cord that you can use to attach yourself to the jet ski and if you take too sharp a turn and fall into the water, the jet ski will stop also. This would have been helpful for Joe Hardy, but then we would not have had a spectacular cliff hanger and explosion in the book.
It was also interesting how unhelpful the local police were in this book. A rash of burglaries at condos on Padre Island have stumped the police. When one of the group of students goes missing, the police say that they cannot do anything for 48 hours. Then when Nancy Drew and the Hardy's find out that the girl has been kidnapped, they choose not to involve the police and go ahead on their own. When Nancy and another boy are shot at and their car disabled on the causeway bridge, the police do not believe that they were shot at and just want them to move the car.  The police were not represented very well in this book and as role models, the Hardy's and Nancy Drew were not very responsible by not including the police.
I was disappointed in this super mystery because I felt it concentrated too much on romance and spring break shenanigans. If this is what spring break is like, no parent would let their child go off with their friends to the beach. The only good thing? Bess saves the day at the end of the book.

Posted by Amanda from Seattle at 5:19 PM