So Ryan and I were inspired by a puzzle montage artist, Tim Klein of Vancouver, WA and some of his art pieces can be seen by following that link. But here is one: 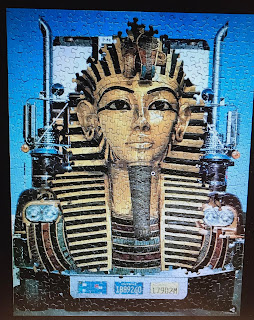 I thought this would be a fun project to do together and it was a lot of fun to work the puzzles and then merge them.
I went to my local Goodwill store to pick up some puzzles cheaply....the key here is to get puzzles by the same manufacturer and in the same size.

We thought the Apple Pie and the Fireworks puzzles might go together nicely.  They are both 500 piece puzzles by the Puzzlebug company. First we completed each puzzle 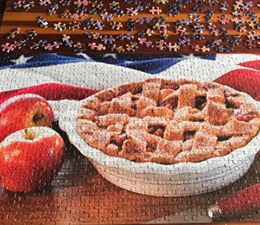 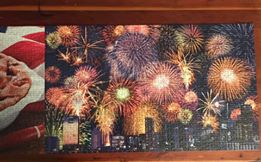 Once we had the puzzles finished, now we had to figure out how to merge them together. My original idea was to have the fireworks coming out of the Apple Pie and that worked pretty good. 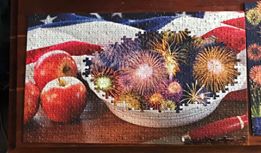 But what I think was the more popular choice was to have the Apple Pie floating over the city with fireworks in the background. 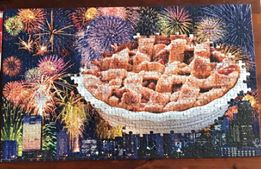 Also while I was at Goodwill, I picked up another puzzle by this manufacturer and we decided to try and merge it with the fireworks too! This is St. Louis Union Station. 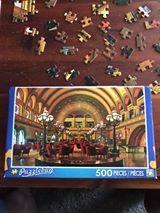 So we have the puzzle finished and this one is missing a piece towards the bottom, but it will not cause us any problems creating our merged "artwork" 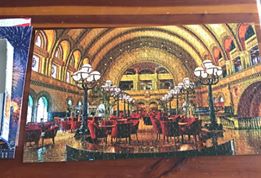 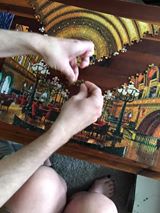 Oh, this one is going to look really nice!! 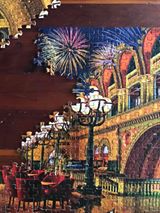 Our finished piece with the Fireworks puzzle merged with the St. Louis Union Station. 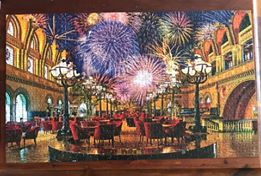 Now we are getting silly and thought we would see how the apples would look in Union Station. 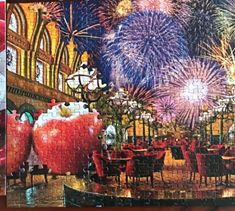 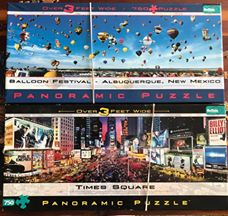 Sad news, but once we put the Buffalo puzzles together, we found out that they are not the same die cut. So we cannot merge them. But it was fun to just do the puzzles and we were only halfway done with the second puzzle when we checked to see if we could merge them and the completest in both of us, said that we had to finish putting the puzzle together, even though we were not going to merge them!! LOL
Posted by Amanda from Seattle at 4:05 PM