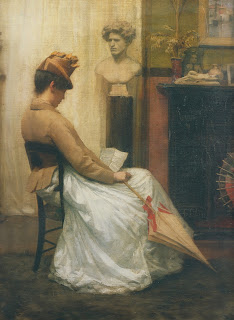 What Remains of Me by Alison Gaylin (library) I liked the "Hollywood Insider" setting of this Murder Mystery. The main character went to jail for murdering a directer when she was 15. Now she is out and her father-in-law (another Hollywood bigwig) has been murdered and she is the prime suspect. Lots of twists and turns as you read about the original murder and the current one.
The Dry by Jane Harper (library) This is your standard murder mystery and what I liked about this one was the setting in a drought plagued Australian small town. A change of pace for me. I had been reading a lot of British set books and now the previous book in Hollywood and this one in Australia was a nice change of pace.
Mrs. Roosevelt's Confidante by Susan Ella MacNeal (library) Back to my cozy British series! But MacNeal brings her characters to the USA in this installment. So that was a fun change too.
Thrice the Brinded Cat Hath Mew'd by Alan Bradley (library) The latest Flavia De Luce mystery. Shades of A.A. Milne, when a beloved author, who wrote charming and playful poems about his son is at the center of the mystery. As always, I enjoyed it and cannot wait for more!!
The Secret of the Golden Pavilion by Carolyn Keene A Nancy Drew book set in Hawaii that I am reading because I will be working a trip to Hawaii later this month.
A Fistful of Collars by Spencer Quinn (library) Chet and Bernie doing security on a movie set, so that made this one fun.
By The Shores of Middlesea by Dana Stabenow (library) I am enjoying these, only one more to read. This one actually reminded me of old Black Stallion books, because the female protagonist has a horse that only she can ride and of course it wins races and stomps on the bad guys etc.
Mark Twain in Hawaii by Mark Twain This book combines two pieces that Twain wrote, Roughing it in the Sandwich Islands and Hawaii in the 1860's I am reading it because I will be traveling to Hawaii later this month.
Good Behavior by Blake Crouch (library) I really enjoyed this, it is a set of 3 short stories or novellas about a con-artist/grifter (made into current TV series) Part of the fun is the author has notes about how he got the ideas for the stories and how they adapted them for the TV Series. Also the first story is set at the Grove Park Inn in NC,
White Picket Fences by Susan Meissner (library) Dysfunctional family drama. I enjoyed it and I am trying to read more by Susan Meissner.
The Twin Dilemma by Carolyn Keene I am reading this one to write an article for a Nancy Drew fanzine. It is one of the more modern Nancy Drew books and is set in New York City.
The Clue in Blue by Betsy Allen The first Connie Blair Mystery story, set in Philadelphia at a department store . Originally written in 1948, it is a world that just does not exist anymore.
Into the Water by Paula Hawkins (library) Just okay, I was not riveted to my seat. Had a hard time finishing it because I just did not care about the characters. I just recently watched the movie version of Girl on the Train and maybe that reminded me of how her characters are not the most sympathetic. And the twist, meh
True Colors by Kristin Hannah (audiobook) This is basically your standard romance novel. It did have some nice Olympic Peninsula location descriptions. There are 3 sisters, but the story really only concerns two of them. I at first thought it was going to be a sort of King Lear story, of the girls saving the family farm, but it became just about two of the sisters and their love lives/relationships.
The Land Beyond by Dana Stabenow (library) The last in this Marco Polo era trilogy by Stabenow. I enjoyed these, they were different than other stuff I have been reading lately. So the setting and characters were fun to get to know.
The October Country by Ray Bradbury (library) short stories by Bradbury, awesome stuff
The Clue of the Broken Blossom by Julie Tatham Set in Hawaii Children's series about a flight attendant. I collect these and really love them!!
The Fisherman by John Langan (library) Spooky Ghost Story book.
His Majesty's Hope by Susan Ella MacNeal (library) Some how I got these out of order. But fans of Maisie Dobbs by Jacqueline Winspear, Bess Crawford by Charles Todd and The Molly Murphy or Royal Spyness books by Rhys Bowen will probably enjoy these as well. This one had a lot of great WWII Germany stuff in it.
The Year of Reading Dangerously by Andy Miller (library) what impressed me and what I forget, is that many people do no have the luxury of reading as much as I do. They are required to limit their reading because of work and family restraints. And then you have to narrow down your reading each year to only one book a month or less. I am blessed to have the time to read as much as I want.


Posted by Amanda from Seattle at 3:09 PM