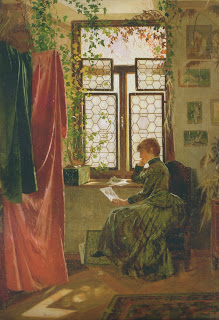 Peter Kraemer I (German)  Reading the Letter, no date


The Second Mrs. Hockaday by Susan Rivers (library) Civil War era story told via letters, I really loved it and recommend
The Prime Minister's Secret Agent by Susan Ella MacNeal (library) Another fun British Cozy set among spies and WWII, this time they are in Scotland for most of the book
Less Than a Treason by Dana Stabenow (library) The latest Kate Shugak, really she is kind of reaching for ways to keep her romantic leads apart!! Ugh, but the mystery was entertaining and I enjoyed reading about Jim trying to decide what kind of plane to buy.
Gwendy's Button Box by Stephen King (library) a short one maybe a novella? And it was okay
Go Set a Watchman by Harper Lee (audiobook) I was not going to read this one. I always figure if the author did not want it published why should we ignore that....It is not really a complete book, not sure what the point of the story is, I read that it was part of the rough draft for Mockingbird, but it was available on audio and I always need something to listen to in the car....And it was okay. I just kept thinking of Harper Lee and the pressure of that first success. Perhaps I need to read a Harper Lee biography.
I See You by Clare Mackintosh (library)  Now I enjoyed this thriller, ripped from the headlines with lots of social media references.
Double Bind: Women on Ambition ed. by Rovin Romm (library) essays on ambition from successful women. I enjoyed it. Considering my biggest ambition has been to lay in the sun  and read books. Anything I can do to let me do that is what I do and for the past 3 days that is exactly what I have done, so I consider my life successful :-)
An Expert in Murder by Nicola Upson I really wanted to like this one, Josephine Tey as the protagonist and the Theater Life in London after WWII. But it really dragged. I plan to read the next one in this series, but it was not my favorite. Especially after Charles Todd, Jacqueline Winspear, Rhys Bowen and Susan Ella MacNeal are doing it so much better.
The Highway by CJ Box (audiobook) 2 girls go missing on a road trip....evil doings of course.
Town in a Lobster Stew by B. B. Haywood Cosy murder mystery set in a small town with the small town politics dictating the murder. Lobster stew recipes are a plus at the end
Heirs and Graces by  Rhys Bowen Georgie gets caught up in the death of a duke who threatened to adopt an heir. All about that rule of Succession that some of you might remember from Downton Abbey.
Damage Control by Robert Dugoni Set in Seattle, so I enjoyed that. But I was distracted by his Nancy Drew style cliff hangers at the end of the chapters!!
Blood Trail by C. J. Box Serial Killer Killing hunters in Wyoming and Field Dressing them like the animals that they hunt. Gruesome murder mystery from CJ Box.
Ten Years in the Tub by Nick Hornby (library) this was kind of fascinating, because it is basically the collection of a column that Nick did for some newsletter, magazine about the books that he would read each month. So it was like this blog. Here is my list and then he would talk about the books some. So I got a lot of great ideas of more books to read!! LOL
Burning Bright by Nicholas Petrie (library) Petrie's Ex-Marine has a lot in common with the Jack Reacher character by Lee Child. This one had some great PNW/Northern California locations. Fun Thriller I highly recommend!!
Who Killed Karen Silkwood? by Howard Kohn (library) Of course, I had seen the movie years ago, but I was not aware of the Civil suit that her family filed against the company. Very interesting. Especially in light of the toxic uniforms that we have recently at American Airlines. Corporate Greed never has your best interests in mind.
Blitzed: Drugs in the Third Reich by Norman Ohler (library) Very interesting. Seems that the German Army was hopped up on meth and Hitler was taking injections several times a day. The author did a lot of research.

Posted by Amanda from Seattle at 3:10 PM