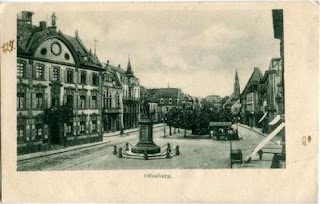 Another of those images that is now gone but not forgotten. This is from circa 1910 Germany. A statue of Sir Francis Drake in the town of Offenburg, Germany, celebrating the Potato. 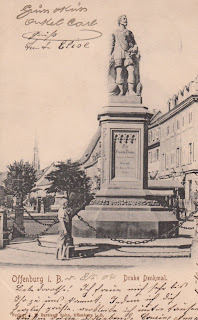 In 1853 an Alsatian sculptor named Andreas Friederich erected this statue portraying the English explorer with his left hand holding a potato plant. At the base of the statue it stated:  “Sir Francis Drake, introduced  potatoes into Europe, in the year of our Lord 1586.” 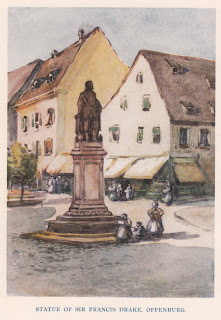 This statue was torn down during the  Kristallnacht event of the Nazi regime in Offenburg. The Kristallnacht riots were aimed at Jewish owned businesses, so I don't know why this statue suffered. Perhaps in the heat of the moment, the Hitler Youth were just wrecking everything in sight?  Or did Hitler have something against the potato?? I found this fascinating news article from 1960 discussing whether the Germans were going to replace the statue or not: News article from 1960
Posted by Amanda from Seattle at 9:45 AM

I am thinking about the statue and it occurred to me that here the americans were not using medals that could be used for planes and weapons and he figured drake wasn't german and he hated the english so uncle adolph just decided to get rid of him...my father was german but he was an american always he went to war but when there was a litle lighthearted stuff going on hitler became uncle adolph...oh my dads ears were kinda big so he would always say what has clark gabel got that i haven't ...a mustche was the safe answer lol...suzy(Y) p.s. i enjoy the postcards..