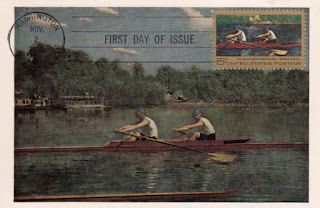 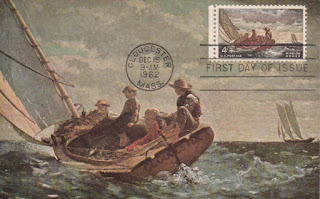 First of all let me say that I am not a stamp collector, so I really don't know anything about First Issues or what makes them important or not. I just like Winslow Homer and these postcards were sold as a pair with their 1960's stamps that were put onto postcards that had the same artwork and then postmarked. The Postcards were from the National Gallery of Art and they don't have any message at all on the back. The top piece of art is not even Winslow Homer! It is called The Biglen Brothers Racing by Thomas Eakins. The bottom piece of art is by Winslow Homer and it is called Breezing Up
Posted by Amanda from Seattle at 7:06 AM