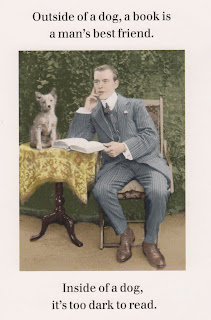 Well, we are coming to an end of another year of reading.

I read 213 books in 2012 compared to 250 books in 2011 and for those of you that are impressed with my totals, I must admit that I have a lot of down time in which to read. My job involves a lot of sitting around and waiting. I spend a lot of time in hotel rooms and if I can stay off the computer and turn off the TV, I can get a significant amount of reading done. At home, I do not have children or pets to distract me from reading. In fact, I can blame the wifi on the airplanes for my having read fewer books in 2012 compared to 2011. Many of my hours of reading are spent on my 4-5 hour flights to and from work. When they added wifi to the airplanes, I started spending more time on the computer and less time reading. I resolve to remedy that in 2013.


A Night Too Dark by Dana Stabenow (library) Kate Shugak mystery, always a pleasure to read.
Stolen Prey by John Sandford (library) Love this author and the Prey Series with Lucas Davenport. I inhaled this one in 4 hours (402 pages) broken down to 3 hours during flight from SEA to PHX and 1 hour on the flight from PHX to LAX these were not working flights, I only get to read so much when I am sitting in that middle seat just like any other passenger :-)

Pioneering Palm Beach by Janet DeVries and Ginger Pedersen My friend Janet co-authored this book and it was very interesting tale of early Florida. If you have any interest in Florida history, this is a must read!!
The American Way of Eating : Undercover at Walmart, Applebee's, Farm Fields and the Dinner Table by Tracie Mcmillian (library) liked it a lot...reminded me of Nickel and Dimed by Barbara Ehrenreich
Object Lessons The Paris Review (library) a collection of short stories--not so great
A Play of Piety by Margaret Frazer--this one takes place in/around a medieval hospital, so if you like that sort of thing (like the medical info in the Outlander books) you might want to give this one a read
Familiar by J. Robert Lennon (library) interesting, is Elisa delusional or in a parallel universe? Odd book but I enjoyed it
Girl in the Plain Brown Wrapper by John D MacDonald
Dress Her In Indigo by John D MacDonald
Though Not Dead by Dana Stabenow (library) another Kate Shugak, I don't know how I got behind on these, but I am catching up :-)
On the Run by John D. MacDonald
My Mother was Nuts by Penny Marshall (library) I am a fan, so I really liked it
Orphan Trains by Stephen O'Connor (library) inspired by the Chaparone by Laura Moriarity I just wanted to learn more about the Orphan Trains. Very interesting.
Deadly Welcome by John D. MacDonald
The Painted Veil by Somerset Maugham rereading a classic
A Working Theory of Love by Scott Hutchins (library) lots of great SFO imagery
The Vanishing Act by Mette Jakobson (library) odd, reminded me a lot of" The Light between two Oceans", just that it took place on an island with a lighthouse and had themes of isolation and death.
The Vault by Ruth Rendell (library) Love it!! I am a fan
Dare Me by Megan Abbott (library) very like Mean Girls or Pretty Little Liars
Restless in the Grave by Dana Stabenow (library) another great Shugak combined with the Liam Campbell character, so if you are a Stabenow fan this is a must read

Six of my favorite books this year have been:
I am Half-Sick of Shadows by Alan Bradley :Part of the Flavia de Luce series which I adore Believing the Lie by Elizabeth George :big fan of hers and I liked her YA novel too, The Edge of Nowhere
Working the Skies: The Fast Paced, Disorienting World of the Flight Attendant by Drew Whitelegg :just a great book about what my job is like!
Gone Girl by Gillian Flynn : so creepy
The Chaperone by Laura Moriarty : set me on the road to a lot more reading about Orphan Trains and Louise Brooks and the silent film era I learned a lot and I enjoyed the book a win-win.
If Walls Could Talk by Lucy Worsley : just really interesting and well done for a nonfiction book


Posted by Amanda from Seattle at 3:05 PM

I just finished Gone Girl last night! My total for 2012 was only 51, but 7 of those were Outlander books of 900+ pages each so I think I should get 3X credit