Our Christmas Present: A New Deck 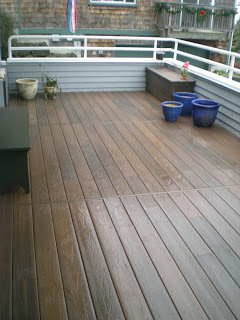 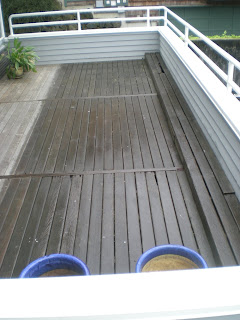 It appears that our old deck was never maintained. The deck gets constant exposure to the sun and rain here in the PNW. Just walking around on the deck and you could hear and feel it splintering and giving out beneath your feet. The wood was splitting and warped. We had fungus growing on the boards. It was not a matter of cleaning and resealing or even repairing the deck, it would have to be totally replaced. 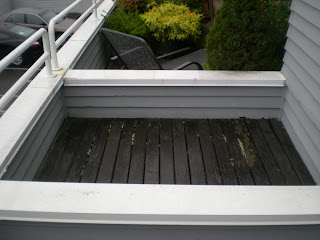 We researched our options and decided to go with a composite deck instead of another wood deck. The composite decking is made from recycled materials and it is lower maintenance than the traditional wood decking. We still have to keep it clean, but we will not have to seal or stain it every year or so. And it has a 20 year warranty.
So the first day of the installation of the new deck was devoted to ripping out the old deck and cleaning out the space beneath. 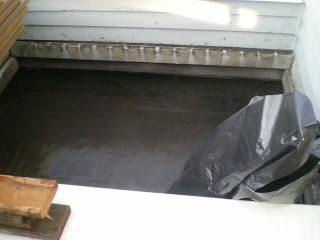 The deck rests on an area of torchdown roofing and there are drains located in the two far corners of this area. Once the deck is in place, we will have access to the drain areas so that we can keep them free of debris throughout the year. (a type of maintenance that was previously never done as far as I can tell!)
Day two of the Deck rebuild was spent putting down the new decking and repairing a leak that was flooding the outdoor storage closet (the leak was coming from the deck area above us!) We had to get the condo association involved to access the deck in the condo above me and it was then that we found out that we had certain criteria to follow when putting in the new deck flooring.
Despite several emails and phone calls I had made to the condo association trying to find out anything about putting in a new deck and I was always told that the deck "was the responsibility of the owner" Okay, then I can pretty much do whatever I want....well it seems that that is not the case. 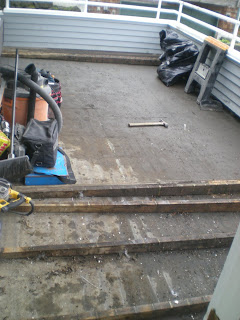 There needs to be access to the drains underneath the deck flooring and they were not happy with the way that my contractor had proposed to do this, so we were going to have to rip up the work already in progress and redo the flooring design. Also I was going to have a built in bench/storage. This was also going to have to be reworked. 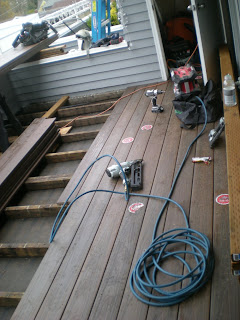 It would have to be totally portable and able to be moved, not an actual part of the deck. So annoying when I had been emailing and calling for months prior trying to get just this sort of information. 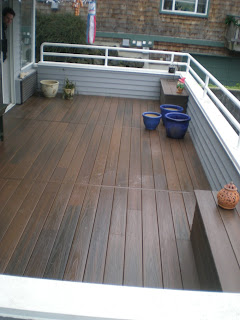 So it just added another couple of days to our project. But now we have dry storage in the outside closet and two lovely benches on the deck, (that can move), access to the drains below and fantastic twinkling icicle lights dripping off the eaves. :-) We will be enjoying sunsets for many years to come!

Many thanks to Mike and Jason at UrbanBuild for doing such a great job! I highly recommend them for any rebuilding, remodeling or handyman jobs that you might have, no job is too big or too small or too complicated for these guys to tackle. I will be consulting them when it is time to redo my bathrooms.
Posted by Amanda from Seattle at 1:38 PM