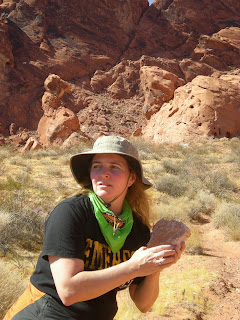 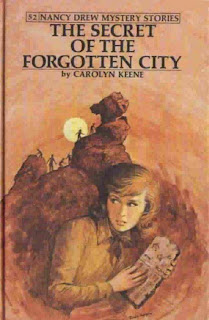 Here I am at Valley of Fire outside Las Vegas, Nevada trying to reenact the cover to a Nancy Drew book!

Pretty close representation I think!!
I am standing in front of the rock formation that is in the artwork. Although you can't see all of it in the photo. We should have been further away to get it right.

Here are the books I read in November:

In honor, of Nancy Drew we start off this month with a modern girl's series book. Night of Skulls is a really fun book set during Halloween and All Souls Day. Lots of great info about All Souls Day and Day of the Dead traditions and a fun mystery starring Sammy Keyes, a modern day Nancy Drew.

Graham Joyce was recommended by Stephen King and I read "The Silent Land" last month and really liked it. Indigo was weird, I think I liked Silent Land better. I did not find Indigo as creepy/scary as I had hoped. But I will be reading more Graham Joyce. Indigo is about how the color indigo does not exist, but everyone knows about it, so it must have existed at some point...and perhaps it is a portal to invisibility or another dimension or something. Like I said, it was weird.

The Language of Flowers is about a girl growing up in the foster care system. It reminded me a bit of White Oleander (the descriptions of foster homes and foster parents etc) I enjoyed it and would recommend it. It is the first book from this author.

The Ice Princess and The Preacher are by Camilla Lackberg. She is the number one best seller in Sweden and is just now gaining an audience in the US (after the success of the Stieg Larsson Girl books). She has the same English translator as Larsson. Murder mysteries, very dark.


The Best American Essays included a story by JoAnn Beard (InZanesville and Boys of My Youth) When I say that I am going to read everything that someone has written, I am not joking. I will even try to find old copies of New Yorker or Vanity Fair to track down stories by authors that I really like. I am like a reading stalker that way! Some of the essays I had read when they were first published in New Yorker, and I quite enjoyed one by Molly Peacock and will be looking for her book.

Boys and Girls Like You and Me is a collection of short stories. I liked it a lot. Chick lit stuff, I got the recommendation from Elle Magazine. And I will be reading more of this author.

The Buddha in the Attic is about "picture brides" brought from Japan to the US during the early 1900's. If you like Lisa See's books about the Asian experience, you might enjoy this one too.

You know when the Men are Gone is a short story collection about the soldiers who leave for the war in Iraq and Afghanistan and the women they leave behind in base housing and their families and the experiences they have when they return home on leave etc. etc. I liked it.

Dexter by Design is one of the latest Dexter books by Jeff Lindsay, these are the basis of the Showtime TV show. Of course, you get a lot more of Dexter's internal life in the books and they have departed from the books in the TV show plots. But if you like gory serial killer stuff, you ought to give these a try. They are really interesting. I hate to say they make murder and mayhem fun, but I guess they do...

Inside Scientology. I am always fascinated by other religions. Especially when they are in the news as much as Scientology. I don't really know any more about Scientology than I did when I started the book! I do know more about it's history and L. Ron Hubbard. But I guess in order to really get to know Scientology, you have to pay the money!! What I got out of this book is that Scientology is basically a business in the business of making money.

Elizabeth Buchan also wrote a book called "Revenge of the Middle-Aged Woman". I enjoyed that one and I enjoyed this one too. Some folks might think this is the basis of the TV series The Good Wife. The only similarities are that the wife of the title is a politician's wife and yes the politician did cheat on her, but in the book there is no scandal, no "stand by your man" stuff. It is more about how the wife gives up her life and goals to be a public partner for her husband. When their daughter is leaving the nest and her father passes away, the wife is at a cross roads and feels the need to change things.

Destiny of the Republic continues my obsession with President Garfield. After reading Assassination Vacation, I became intrigued with Garfield and wanted to know more. Ryan and I had the opportunity to visit his home and grave site in Ohio this year! This book is about his brief presidency and assassination. I enjoyed it very much. It is especially poignant that he could have survived the gun shot if the Doctors had known more about germs and the importance of sterile instruments.

Resistance is one of those 'Alternate History" books. What if Germany had invaded England in WWII? This story looks at a small community in Wales that is occupied by German soldiers. I enjoyed it a lot.

Naughty in Nice was yet another fun murder mystery about the Lady Georgiana Rannoch, 30th-something (or is it 40th-something ?) in line for the throne of England. The Queen has her spying on her son and Wallis Simpson, this time on the French Riviera and she is to retrieve a stolen snuff box. Historically accurate details about Coco Chanel are in this outing!

Tooth Fairy is another creepy book by Graham Joyce. This one is about a Childhood Tooth Fairy who is an evil type of fairy godmother to one boy in England. The boy sees the Tooth Fairy, very much against "the rules" or the laws of nature or something and then continues to see this gremlin for the rest of his adolescence. Very weird.
What Alice Forgot is a really fun Chick Lit book. The premise is that Alice hits her head and does not remember the last 10 years of her life. It is 2008 and she is in the midst of a custody battle over her three children while divorcing her husband. She thinks it is 1998 and she is still pregnant with her first child and still madly in love with her husband. Awkwardness ensues. I liked it a lot and would read more by this author.

Another Stephanie Plum book by Janet Evanovich. I used to really look forward to these, but it is all the same jokes again and they are just starting to really run together in my head. Stephanie never grows up, her situation never changes and I am getting tired of that. There were fun parts, but they are the same situations that we have seen in previous books. So I didn't laugh as much, didn't laugh as hard as in the past. I am getting tired of these.

The Story of Charlotte's Web is about E. B White. I loved it! It is basically a biography, looking at his life and what led him to write his wonderful children's books.

After meeting Amy Ephron on the airplane this month, I read her latest book. It is a collection of essays about her life. Those Ephron sisters (Nora and Delia and Amy) are all so talented and come from such an interesting Hollywood/New York family.

20 books this month
Posted by Amanda from Seattle at 1:06 PM

Love the pic! I remember this story too, though it's been awhile since I read it-longer than I care to admit :)
I was at Costco yesterday, and saw they had the complete set of Nancy Drew. That is now on the top of my Christmas list!

Adorable photo! I sure hope you continue your book lists and critique every month next year. I get a lot out of them. Found some good books that way too!