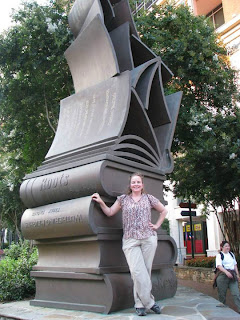 This photo is at an awesome book sculpture in downtown Charlotte, NC

Some folks were wondering where I get the idea to read certain books. For new books and current authors, my favorite resources are magazines. Entertainment Weekly, The New Yorker and even People and Elle magazine. They all have book reviews of new stuff that is coming out. I will also see blurbs about books in newspapers and USAToday. If it interests me, I will write it down and then I go and reserve it at the library. If the library doesn't have it, then I will look for it when I go to used bookstores. I will also check out the staff recommendations at bookstores and libraries.
Once I enjoy an author, I will then seek out everything they have written and read it all. Sometimes I will just see a book in a store and be intrigued by the cover or the title and just pick it up. I also rely on recommendations from friends and family. By the way, in addition to reading books every day, I also read magazines and newspapers! Like anyone else, sometimes I just can't keep my mind in a book. So then I like to read something quick, magazines are great for this (and I also read short story collections for this reason as well)

Here are the books that I read in March:

The Wordy Shipmates by Sarah Vowell
Winter’s Bone by Daniel Woodrell library
The Big Sleep by Raymond Chandler
Possum Living: How to Live well without a Job and with (almost) no money by Dolly Freed library
Maisie Dobbs by Jacqueline Winspear library
Grifter's Game by Lawrence Block library
Bad Move by Linwood Barclay library
Dead Until Dark by Charlaine Harris library
Murphy's Law by Rhys Bowen library
Little Boy Blues by Malcolm Jones library
Birds of a Feather by Jacqueline Winspear library
Death of Riley by Rhys Bowen library
Stories from the Twilight Zone by Rod Serling
Farewell My Lovely by Raymond Chandler library
The Painted Veil by W. Somerset Maugham library
Pardonable Lies by Jacqueline Winspear library
The Weird Sisters by Eleanor Brown library
A Red Herring without Mustard by Alan Bradley
Living Dead in Dallas by Charlaine Harris library
The Bird Man and The Lap dancer by Eric Hansen
The Sinus Cure: 7 simple steps by Debra Fulghum Bruce and Murray Grossan, MD library
The Lady in the Lake by Raymond Chandler
At Random the Reminiscences of Bennett Cerf library
Maud the Life of L.M. Montgomery by Harry Bruce
What the Dogs have taught Me by Merrill Markoe
Black Book of Secrets by F. E. Higgins
The Secret of Lost Things by Sheridan Hay
Raven Stole the Moon by Garth Stein library


The Wordy Shipmates is about the Puritans who came to America and settled in the Boston and Plymouth areas. It was okay, I enjoyed another book better. A Voyage Long and Strange: Rediscovering the New World by Tony Horwitz. It is about what happened in North America between 1492 when Columbus arrived and 1620 when the Pilgrims came. It is 100 years of history that we pretty much ignore most of the time. I will say that Sarah Vowell is an entertaining writer and I did enjoy her slant on her subject. But much of the book was very dry, I hate to say, boring.

Winter's Bone, you might have heard of the movie, the actress was up for an academy award....the book was great and I plan to read more from this author.

A Red Herring without Mustard by Alan Bradley, this book was a birthday present and the third in a new YA series that I absolutely love!! Flavia De Luce is a wonderfully fun and clever heroine. "The Sweetness at the Bottom of the Pie" is the first in this series.

Maisie Dobbs is the start of a murder mystery series set in post WWI England. I enjoyed it a lot and will be reading the rest of these books by this author. It was very similar to another series I started reading last year by Charles Todd featuring a WWI Nurse, Bess Crawford. The first book in the Bess Crawford series is "A Duty to the Dead" and I look forward to reading more of those also!

Little Boy Blues is a memoir of a man raised in 1950's NC. Being from North Carolina I enjoyed it. If you were raised in the south, you will see lots of similarities. I always enjoy southern writers for the familiarity that I have with their subject. I already KNOW all these characters, I have eaten the same food and been to the same places.

The Painted Veil by W. Somerset Maugham This one was made into a movie in 2006 with Naomi Watts and Edward Norton.

The Weird Sisters I recommend. I enjoyed it a lot. If you have a sister (or sisters), if you like reading, if you like Shakespeare. Reminded me a little of some Jane Smiley or Carol Shields. Great descriptive passages: "Bean pulled a heavy towel from the stack of laundry, unwinding it from the lascivious position it had gotten into with a pillowcase." I just love stuff like that!


At Random the Reminiscences of Bennett Cerf, I got the idea to read this book from a documentary I watched about the history of the Tonight Show with Johnny Carson. They mentioned a "Bennett Cerf Joke Book," so I went online looking for info about Bennett Cerf and found this book at my local library. It is his autobiography, turns out he was one of the founding fathers of Random House book publishing. The book is an amazing account of his adventures meeting famous writers like Truman Capote, Ernest Hemingway, Theodore Dreiser, Dorothy Parker, William Faulkner and many many more. I was captivated.

Now don't forget, you can now subscribe to my blog and get emails each time there is a new post.

Posted by Amanda from Seattle at 6:25 AM

{{Winter's Bone, you might have heard of the movie, the actress was up for an academy award....the book was great and I plan to read more from this author.}}

Did you know the actress (Jennifer Lawrence) was recently cast as Katniss in the Hunger Games film? (No fooling)

One of the Librarians I work with recommended the Maisie Dobbs series. I started reading them last month. Right now I'm on the third book "Pardonable Lies".