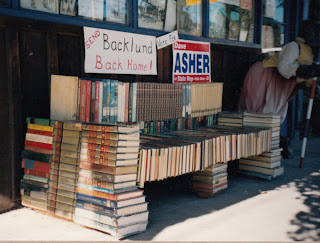 Super creative, a bench made of books! I want one at my house :-)

I had mentioned last month that I also read magazines and someone wanted to know what magazines I read, well Ryan and I have subscriptions to Entertainment Weekly and Newsweek and Backpacker, but I also get magazines that are left onboard the airplane and at a magazine exchange at our local library, and our used book store also sells used magazines for 25 cents. So I get them there too. Most months I read those previous three I mentioned and Sunset, Outside, The New Yorker, Smithsonian, Southern Living, Discover, Astronomy, O, Time, Esquire, Redbook, Allure, Elle, Glamour, Us, People, Ladies Home Journal, Real Simple, In Touch, Self, Woman's Day, Consumer Reports, Seattle and Good Housekeeping.

Other magazines that I might read only a couple of times a year are New York, Popular Mechanics, Fitness, Men's Health, Travel and Leisure, Town and Country, Vanity Fair (great article about Rob Lowe this month!), Harper's Bazaar, Vogue, Outdoor Photographer, Just Cross Stitch, Reader's Digest, Islands, Coastal Living, Alfred Hitchcock's Mystery Magazine, Cross Stitcher, Firsts, Country Living and Memory Makers Magazine. I am sure that there are many more that I am not thinking of at the moment...I will often pick up a scrapbooking or cross-stitch magazine at craft stores like Michaels or if Ryan and I are going on a special trip somewhere, we might pick up some magazines to read on the plane as a special treat.

Here are the books I read in April, Thanks so much to everyone who sent me boxes of books for my birthday!:

Messenger of Truth by Jacqueline Winspear library
Club Dead by Charlaine Harris library
Cloud Atlas by David Mitchell library
Sins of the Fathers by Ruth Rendell library
Dead to the World by Charlaine Harris library
All We Ever Wanted was Everything by Janelle Brown library
The Best Man to Die by Ruth Rendell
Paris Wife by Paula McLain library
An Incomplete Revenge by Jacqueline Winspear library
Squirrel seeks Chipmunk by David Sedaris library
The Early Work of Philip K. Dick Volume One: The Variable Man and other stories library
J. D. Salinger: A Life by Kenneth Slawenski library
Starvation Heights by Gregg Olsen
Full Dark, No Stars by Stephen King library
The Winter of Our Disconnect by Susan Maushart library
For the Love of Mike by Rhys Bowen library
At Home: A short history of private life by Bill Bryson
Burning Bright by Ron Rash library
Among the Mad by Jacqueline Winspear library
In Like Flynn by Rhys Bowen library
Heat Wave by Richard Castle

Cloud Atlas was very interesting. I started it and was not sure if I liked it or not, but the more I got into it, the more I liked it. It felt a lot like a collection of stories, but they all intertwined and circled back to each other. In the end I was fascinated. It was a finalist for the Booker Prize. The Man Booker Prize for Fiction is a literary award for the best original full-length novel, written in the English language, by a citizen of the Commonwealth of Nations, Ireland or Zimbabwe each year. Previous winners are The Remains of the Day, The English Patient, and Life of Pi. Since 2001, they have revealed the runners up. The year Cloud Atlas was a finalist (2004), The Line of Beauty by Alan Hollinghurst won the Booker.

The Ruth Rendell mysteries are great, these are Inspector Wexford ones that were also made into a series on British TV. More Jacqueline Winspear this month and more of the Sookie Stackhouse novels by Charlaine Harris, the Molly Murphy mysteries by Rhys Bowen too, I will be reading more of these all through the summer.

All We Ever Wanted was Everything is a story about divorce. Very much a chick lit type of book....depressing not funny, similar to Picoult, Shreve or O'Nan, but I enjoyed it.

Philip K. Dick....can you believe I haven't read Philip K. Dick??? Neither could I! The author of Blade Runner, Minority Report, and Total Recall!! This is a collection of his short stories.

I enjoyed Paris Wife quite a bit and will probably be rereading some Hemingway now. It is the story of Hemingway's first marriage told from the point of view of his wife, Hadley Richardson.

David Sedaris, I am a huge fan and found this selection of stories pretty funny (and disturbing too) I would love to see Sedaris read in person.

Starvation Heights is a non-fiction telling of the murder trial of an Olalla, WA doctor who ran a sanitarium where folks were starved to death. She (a female doctor in 1910!!) advocated fasting as a remedy for most all disease. It promised to be a spooky and exciting tale, but soon became mired in the notes of the trial.

Stephen King, I am always a huge fan and happy to say that these stories are much better than some of the books he has had out lately! Creepy stuff, highly recommended!!

J.D. Salinger, again, I am a huge fan, so of course fascinated by this biography. I am always intrigued when people acquire fame and then hate it so much.

Bill Bryson, Huge fan! :-) and gave me lots of ideas for other books to read!

The Winter of Our Disconnect has me wishing I could disconnect a little more. If I wasn't blogging, watching reality TV online and playing games on Facebook, I'd have more time for reading :-) A mom with 3 teenagers pulls the plug on Electricity (for 4 weeks!!) and on Cell Phones, Video Games, Ipods, TVs, and Internet for a total of 6 months. This is her story. There were loopholes, one daughter basically went to live with her dad (they are divorced) for much of the time and the kids could use internet, play games etc. at their friend's houses or internet cafes. They were also forced to use libraries to complete homework assignments on the internet. But all in all, it was an interesting experiment and I enjoyed this book.

Burning Bright is a selection of short stories by a NC author. Very Appalachia, much like Winter's Bone in the tone. Very good though, quite enjoyed.

Heat Wave by Richard Castle is a promotional book created for the ABC tv series Castle. I hate to say it is a "fake book" but it is... and entertaining none the less. Wonder who the ghost writer is??? Of course I was grinning all through the reading and looking for parallels to the tv show. I catch maybe every other episode of the TV show, so I am not 100 percent clued in to all the nuances of Beckett and Castle. But I think you can get a lot out of the book that maybe you don't catch while watching the show. It is told from "Nicki Heat/Beckett"'s viewpoint, and of course is written by "Castle/Rook" (Rook is the writer character in the book) A fictional world within a fictional world! I love stuff like that.


Don't forget, you can now subscribe to my blog and get emails each time there is a new post.

Posted by Amanda from Seattle at 6:40 PM

I seriously cannot imagine how you can get all this reading done and still work, eat and sleep! You must be a speed-reading genius!