Lassen is Not Lesser 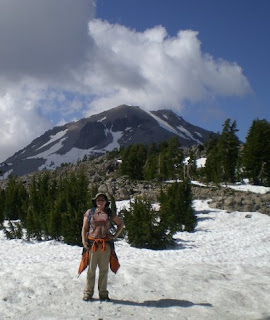 Tucked way up north in the upper reaches of California, it is a mini-Yellowstone with all kinds of interesting volcanic features. The park contains all four types of volcanoes: shield, cinder cone, lava dome and composite. Hydrothermal features in Lassen include roaring fumaroles (steam and volcanic-gas vents), thumping mud pots, boiling pools, and steaming ground. Native Americans, emigrants and pioneers all give Lassen a unique history. There are amazing photos and research from the volcanic eruption in 1915. The visitor's center has been newly remodeled and has wonderful exhibits detailing all aspects of the park. All in all, it is a hidden gem of a park.


Ryan and I decided to hike to Bumpass Hell. It is a popular area of the park that has the largest fumarole in the park. This fumarole (called Big Boiler) has high-velocity steam coming out of it that has been measured as high as 322°F, making it one of the hottest fumaroles in the world. The trail is supposed to be quite easy, even though you are hiking at an altitude of about 8,000 ft. There is not too much change in elevation from the trailhead at Lake Helen. The active area can be seen (and smelt!) from far away. It is filled with various steaming pools and unusual multi-colored soils, stained orange, brown, yellow and green by sulphur and other minerals. The sulphur/rotten egg smell fills the air. I was going to hike out to Bumpass Hell from Lake Helen. Ryan was going to take a longer route up from the Visitor's Center. 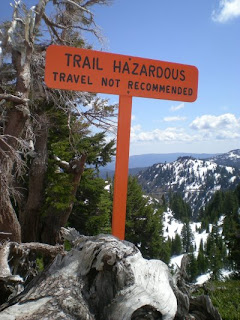 I left Ryan to start his hike and I drove around to the trailhead at Lake Helen. That is when I noticed the Trail Hazardous signs and the warnings that the trail was supposed to be closed because of the heavy snow. I had no idea if Ryan would be seeing signs like these at the lower elevations....he was hiking up from about 6,500 ft. I was a little leery to start the 3 mile hike, but the trail from the parking lot was well trod and pretty busy. Families with small children and grandparents were coming back from the trek, so I figured that it couldn't be too bad! Ryan would have another story to tell from his end of the hike. 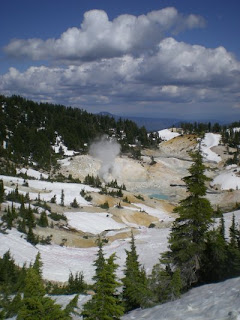 He did eventually meet with me in the trailhead parking lot....but our estimates of how long the hike would take were off completely! The heavy snows made for slow going. We each had hiking poles which were a great help and my only regret is that I did not have my YakTrax with me for better traction.

On the way back to the parking lot, I encountered a Marmot along the trail.

Posted by Amanda from Seattle at 2:45 PM

Amanda-my husband and I met on Lassen in August 2001. LOVED it. We LOVED it. It was beautiful-snow in August on the tippy top, too! I have a picture somewhere of us standing at the very top near the equipment that measures for seismic activity. Mr. NC nearly fell off the top, too-skidded down. We camped on Manzanita Lake. You should also check out Bandera Caldron. It's privately owned, but the remains of a volcano.

This is truly a little-known gem of an area of California. We planted 3 'boxes there a few years ago--at the boiling pots, Burney Falls and one other. We've only had 1 finder on the first one! Did you look for any of them?

ouI love the pictures and video! Thank you for posting this! I now have another "must see" place on my already too long list...

I love Lassen too. Where else can you go in August to snow slide on garbage bags in the morning then come down and swim in one of the lakes in the afternoon? We vacationed there many times when the children were young.

This is such a great area for scenery and surprises. Hope you went to Burney Falls, the subway cave and found some of the many boxes planted within a 50 mile radius of this great park.