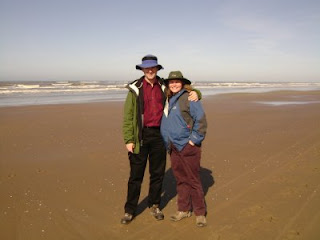 For my 43rd birthday this year, Ryan and I traveled to the Netherlands to visit with my friend Jenny. Her family is living in Wassenaar near The Hague and very conveniently located near many of the major touristy sites in the Netherlands. Our first day we were pretty tired from the long flight. We had flown directly from Seattle to Philadelphia and then on to Amsterdam in one day. We arrived around 9:30am local time, so the day was spread before us, but we were pretty wiped out. We stopped by the beach at Meijendel Dunes because it was an incredibly sunny day and supposedly these don't happen that often in this area. Or at least not until June or July.

The next day we started out bright and early and took a walking tour of The Hague. This town is where the Royal Family lives and there are a lot of interesting buildings and history around the area. One thing that interested me was the mail slots with nee and ja on them. 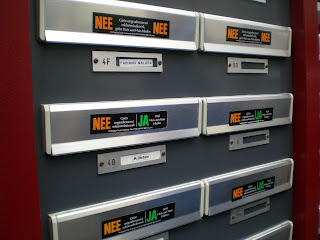 The mailman will look at the nee and ja and that will indicate what kind of junk mail you will receive. If you want everything it will say ja-ja. If you don't want any junk mail it will say nee-nee and if you only want certain kinds of junk mail....maybe catalogs or coupon paks, then it says nee-ja. Pretty cool. Our Dutch Treat today was Appelgebak with Slag. That's dutch apple pie with whipped cream. :-)

On Friday we went into Amsterdam. Since we are staying in the Hague, this required us to take a bus to the train station and then a train into Amsterdam. We had been on the bus the day before when we did the Hague tour, so we were fine with that and we thought we would be fine with the train. They have these machines where you can buy your ticket and it is in English. The only problem was that it did not like any of our credit cards or debit cards and it would not take paper money, only Euro coins. Well, it was 37 euros to take the train into town and we didn't have that in coins! So we went to the ticket counter to purchase our ticket. We told the lady at the counter that we wanted two return tickets to Amsterdam Central Station. She printed out the tickets and told us it was leaving from track #5 in 5 minutes and we should hurry over there! So we hustled over to track #5 and got on the train just before it left the station. We settled in for our 45 minute trip to Amsterdam. I was reading the guide book to see what we wanted to do first in the city while Ryan was looking out the window at the countryside. We came into the first station along the route and it was Gouda. Hmmmm that didn't seem quite right to me, we should be going through Leiden. Maybe we have to change trains somewhere...what do our tickets say? Ryan gets our tickets out and they say Utrecht Central Station. That is not where we want to go! The fare from The Hague to Utrecht was the same as the fare from The Hague to Amsterdam, so we didn't see anything unusual when we purchased the tickets. But all is not lost, we can change trains at Utrecht and eventually get to Amsterdam. We might have to pay more money. So we get off at Utrecht and go to an information counter to explain our dilemma. The girl there says we should just get on the train to Amsterdam and when the ticket taker comes along explain it to them, but it should be okay. So off we go to track #14 and a train to Amsterdam. Once there, we also go to the ticket counter to try to get our tickets changed for our return to the Hague, but again they tell us to just get on a train and explain it to the ticket person and it should be okay. These Dutch, they are so easy going, they just shrug their shoulders and say it will be okay. :-) 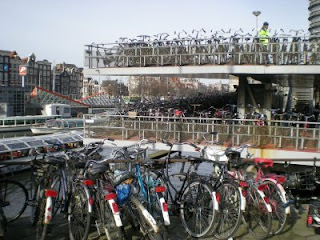 At Amsterdam Central Station, the first thing we see is the HUGE bicycle parking garage. It is several stories. Everyone who commutes in to work keeps a bike here (they don't always allow them on the trains...especially during rush hour)-- so people keep a bike here to ride around town. So many bikes!!

We signed up for the Hop On/Hop Off canal boat tour. I am a huge fan of these types of tours. They have them in almost every European City (and many American Cities). Your ticket is good for the whole day and you can get on and off the bus wherever you want. Well, it is usually a bus, but here in Amsterdam it is a canal boat. Our first stop would be the Anne Frank House. It is wildly popular with tourists and there is usually a long line, so it is best to get it out of the way early in the day. We got there around 11am (we were a little late due to our detour to Utrecht) but there wasn't a line and we went right in. When we were done and came out (about an hour later) the line was wrapped around the building. 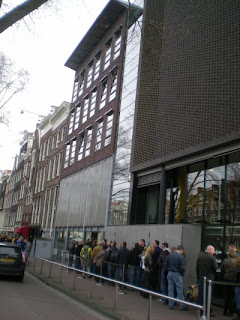 We had a wonderful day hopping on and off the boat and touring Amsterdam. In Amsterdam, the term coffeeshop has come to mean a place where hashish and marijuana are available. If you really want coffee, you have to go to a cafe. I have random drug tests at work, so we stayed away from the coffeehouses. On our way back to the train station that evening we got a glimpse of the Red Light district. It dates back to the 14th Century when sailors would arrive in town in need of some female company. Women stand in the famous windows dressed in eye-popping underwear (and 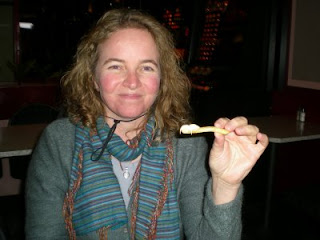 they are not always women). It makes you think again about the term window-shopping. Taking pictures of the Red Light windows is not allowed. Our Dutch Treat today was french fries with Mayonaise which is pretty much standard in Europe. But they will give you ketchup too if you ask.

On Saturday Jenny drove us out to Kinderdijk where there are 19 or so windmills along one canal. We had had terrific weather up until this day. But on Saturday it started to rain and we were in a torrential downpour as we walked along the dike. 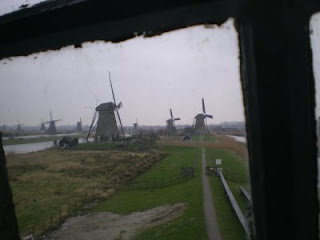 One of the windmills is open to the public and you can go inside and see how a family would have lived in the mill. When we were inside the mill, the windmill sails were turning and it was very noisy. From Kinderdijk we went on to Leiden to see where the Pilgrims came before they went to America. The Pilgrims came to the Netherlands because the Dutch are supposed to be very tolerate to pretty much every thing. But even the Pilgrims were a little much for the Dutch and the Pilgrims decided to leave on the Speedwell and ended up in Plymouth, England where they got on the Mayflower and left for the new world. Our Dutch Treat today was the stroopwafel that we bought at a street stand. It is a thin Dutch waffle with a caramel like syrup filling. They were first made in Gouda, in the 1700s. 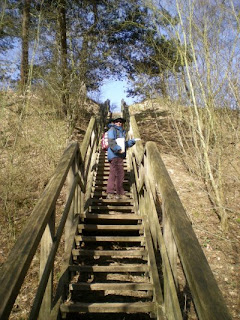 Sunday was challenging. In Europe most everything is closed on Sundays, so Ryan and I decided to spend the day hiking through the Meijendel dunes 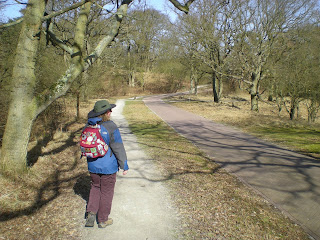 and walking along the beach and pier at Scheveningen. Scheveningen is like the Atlantic City of the Netherlands. There is a board walk with all kinds of crazy bars and games for the kids (trampolines) and there are Casinos. Because it was another pretty day, the beach was packed with people. The concrete structures in the sand dunes are the remains of The Atlantic Wall. This was an extensive system of coastal fortifications built by Hitler. The Netherlands was occupied by the Germans during WWII and the 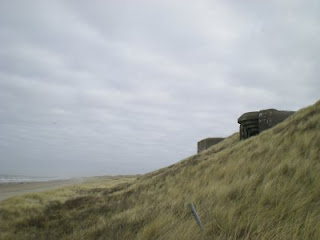 Atlantic Wall was built to defend against an anticipated Allied invasion from Great Britain. Many Resistance supporters were executed in the dunes. Each year a memorial service is held in their honor. Space is at a premium in the Netherlands. The whole country is about the size of Maryland. Here is a picture of a golf course that 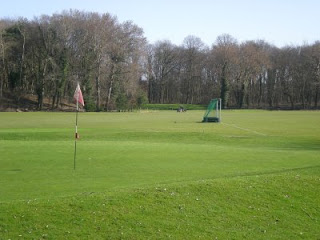 shares it's fairway with a soccer field. Our Dutch Treat today was the Bitterballen at McDonalds! The Croquette in the Netherlands is a fried, roll-formed snack containing some kind of meat. You will see these at almost every restaurant in the Netherlands. They even had it at McDonalds. You could get a sandwich of Kroket or on their 1 Euro Menu they had Bitterballen which are basically Krokets, only round, not oval.

Monday was our last full day in the Netherlands and we went to Delft on the trolley from the Hague. We toured many sites where the artist, Vermeer lived and worked while in Delft and we climbed the tower of the New Church. The Old Church is where Vermeer is buried and it has a brick tower that leans about 6 feet from the vertical. We had a lovely lunch at an outdoor cafe in the main Market Square where we finally tried Poffertjes, which are little dutch pancakes. They are served with powdered sugar and butter. Temporary poffertjes "houses" appear across The 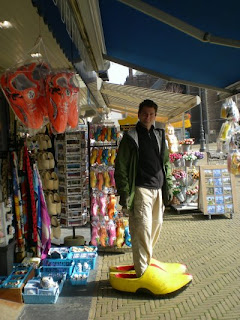 Netherlands from March to September, selling the little treats by the dozen.


The one dutch treat that I did not get was the haring. A Dutch delicacy is eating a raw herring with raw onions. You pick the fish up by the tail and let it slide into your mouth gradually. Of course the head is removed and the fish has been cleaned. The first catch of the season is called Hollandse nieuwe and is considered a special treat. I definitely plan to do this on a layover one day. We were shown the best place to do it in the Hague on our walking tour.
Posted by Amanda from Seattle at 8:37 AM

Sounds like a great trip! I had the pleasure of a visit there, but I stayed in Amsterdam and took one day-long trip outside to Delft, the port of Rotterdam, Aalsmeer (national flower market), etc. Glad you enjoyed it -- the Dutch are really wonderful, too. Just finished a book that mostly took place there (WWII) which might interest you: Tamar: a novel of espionage, passion, and betrayal by Mal Peet.

Well that was surprisingly thorough! I might not have anything left to write about now! =)

We did not do much flower viewing because we were too early for the tulips. We did see wonderful fields full of crocus and the daffodils were starting to bloom as well. Along the highway into Delft they had the word Delft spelled out in daffodils. Ryan and I both have more photos of our trip posted on our facebook pages.

A great write-up, and I especially love the details of the daily treat - my kind of trip!

What a wonderful trip. I'm so glad to see that you're having loads of fun!