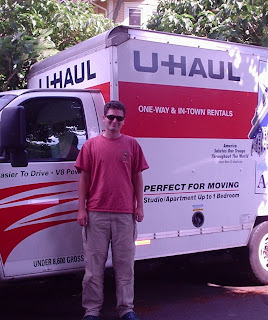 Most of you who have seen my boyfriend, Ryan stamped into a letterbox know that he signs his little Turtle with a Moo voice balloon. So that is behind the "Mooving on Up" of the title of this post. Silly, I know, but we have had a busy two days moving Ryan's gear from Portland, OR to Seattle, WA. From Storage to Storage. and I might be a little punchy.


It all started yesterday morning with a 3 hour drive down to Portland in my little VW. We stopped in Centralia for a Burgerville hamburger and shake. I love this restaurant chain and the closest one to Seattle is an hour and a half drive away in Centralia. They use all local ingredients in their products. So I had Walla Walla sweet onions on my burger (and fried up as onion rings too) And the cheese on the cheese burger is local Tillamook Cheese. The fruit for the shakes right now is Oregon Raspberry. This changes throughout the year with whatever is in season. Yum.


We arrived in Portland and Ryan picked up his rental truck. The 10 footer. "Perfect for Moving" it says on the side of the truck. I was envious, because Ryan would now have air-conditioning for the drive back to Seattle. Ryan had been storing his belongings in the basement of a friend's house in Portland, so we drove over to start moving his stuff out. It only took a couple of hours to get the stuff moved and then his friend Nancy made us dinner. She grilled steaks. After all, it was also a birthday 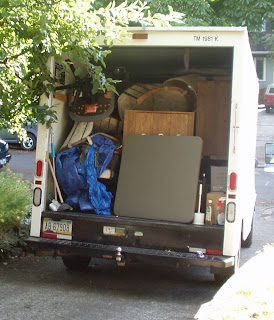 We left Nancy's house just as it was getting dark and drove back to Seattle. One of Ryan's birthday presents was a set of Walkie-Talkies for us to use when we are hiking. As most of you know, Ryan walks at a much faster clip than I do and often leaves me in the dust. This way we can keep in touch on the trail! We brought them along for the return road trip since we would be driving seperate vehicles. It was fun to keep in touch. I felt like I was in the movie Smokey and the Bandit. Running ahead of the UHaul in my little VW to distract the "Bears" from Ryan's Truckload of .....Stuff. :-)

The next morning bright and early we joined the rest of West Seattle and set up for a little yard sale. But in this yard sale we had more things for FREE than for sale! :-) It is amazing, but people sometimes don't want to believe that you are giving away something of value for free. There must be something wrong with it or some sort of catch. One lady took several free items and then insisted on giving me a dollar. "for my time" she said!

Mainly we had to get rid of stuff because we had to take a full 10 foot truck and squeeze everything into a 5x6 storage space. Ryan and I had lots of duplicate items. You really don't need two microwaves in a one bedroom apartment. Or even two spice racks. Also there were several pieces of furniture that we just did not have room for...some tables and chairs and bookcases. 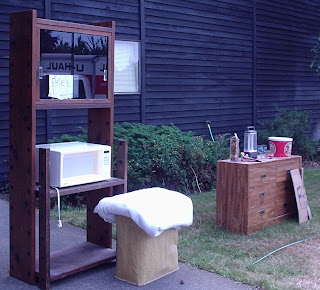 Other household items like blankets and even a lamp or two. We sold enough to buy ourselves lunch at the Charlestown Street Cafe a couple of blocks away. And the rest went into the 5x6 storage unit. There were still a few items left at the end of the afternoon, but hopefully Goodwill will take them. Many thanks to some of our letterboxing friends who came down to take some stuff off our hands!

For those folks looking for some hike-a-thon information in this blog, I have $350 in pledges from 11 people so far! Last year the flight attendants pledged more than the letterboxers, but this year I think the letterboxers are set to make up for it! I have had almost all the pledges from letterboxers so far. Hurrah.
Posted by Amanda from Seattle at 2:15 PM