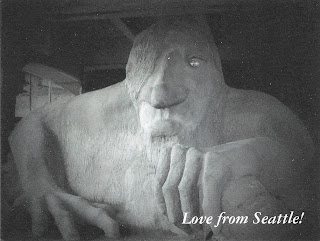 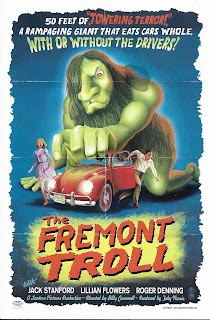 The Fremont Troll used to be a sort of "local's only" secret treat. Now it is on the route of most city tours of  Seattle. Tour buses come by so everyone can get a photo op with the Troll.  The Troll is a statue, located on N. 36th Street at Troll Avenue N., under the north end of the Aurora Bridge. In 1989, the city asked the Fremont Arts Council to launch an art competition to rehabilitate the area under the bridge, which was becoming a dumping ground and haven for drug dealers. Therefore the Troll is considered an example of hostile architecture having been erected to deter the presence of homeless people and antisocial behavior under the bridge. It is clutching an actual VW as if it had just swiped it from the roadway above. Originally, the car held a time capsule including a plaster bust of  Elvis, which was stolen when the sculpture was vandalized.
Posted by Amanda from Seattle at 9:08 AM