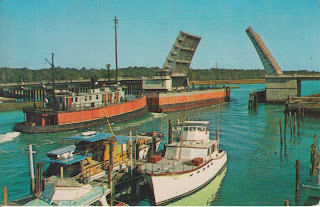 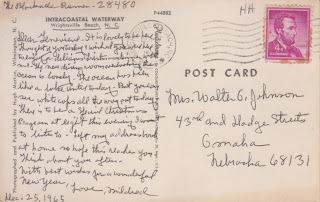 At first I was going to just lump this card together with another for the Intracoastal Waterway, but the message on the back of the card was so interesting, that I felt it deserved it's own post! Postmarked from Wrightsville Beach December 1965, so this was a Christmas card to someone in Omaha, Nebraska! And the sender notes that they were staying at the Blockade Runner --which at the time, was barely a year old, so very modern and brand new!! The sender says that they had Christmas Dinner in the new dining room overlooking the ocean.

The sender also says that "the ocean has been like a lake" and having lived there, we used to call it "Lake Atlantic"

So this was a fun postcard to have in my collection.