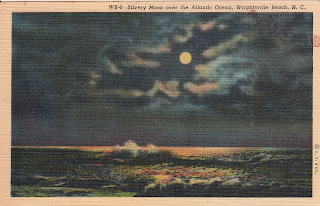 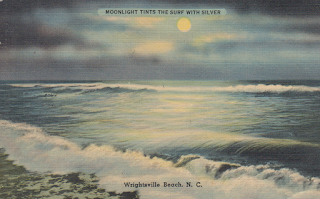 Both of these postcards could be generic beach scenes, but both of these are used and were sent in 1948 and 1943 from Wrightsville, Beach, NC (and they have Wrightsville Beach printed on the front of the cards)  These are some of my favorites of my beach postcards and as a teenager, I was often out on the beach at night watching the moon and the phosphorescence.

The second card "moonlight tints the surf with silver"  was sent by a serviceman from Camp Davis, so it was FREE to send and it was the one sent in 1943--in the message he tells his friend that if he does not write back to him, when he comes home he will beat him up!! LOL
Posted by Amanda from Seattle at 5:53 PM