Happy Thanksgiving   Evil in Amsterdam and At All Costs Super Mysteries 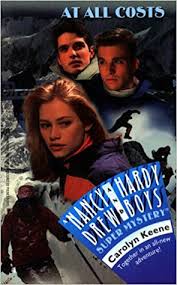 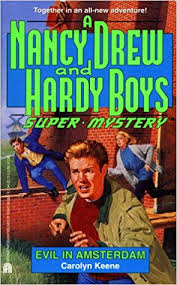 Evil in Amsterdam was published in November of 1993. Nancy and George are traveling to Amsterdam to meet George's friend Merissa, who is a freelance reporter.  Frank and Joe are being sent to Amsterdam as couriers in a sting operation concerning stolen WWII Dutch gold.  When Nancy and George arrive, Merissa is missing.  Frank and Joe find that the person that they were supposed to deliver papers to has been murdered.
I loved the travelogue aspect of this book. There are lots of great descriptions of Amsterdam and the weather during November. We are told that Frank and Joe are there for Thanksgiving vacation.
Nancy and George's mystery takes center stage and the Hardys assist them in their detecting to find Merissa. Frank and Joe are told not to investigate the stolen gold because it is too dangerous. So they hang out with Nancy and George and work on that mystery together.  Merissa is engaged to a prince, so they get to visit a castle and Joe romances a princess.  They check out an investigative reporting story that Merissa was working on concerning a famous Dutch resistance fighter and art dealer.
I liked this super mystery because the Hardys and Nancy Drew were treated like equals. I liked the setting and the mystery of missing gold stolen by the Nazis.  So Evil in Amsterdam gets 2 thumbs up from me!
At All Costs was published in 1997 and has the Hardy Boys traveling to Salt Lake City, Utah during Thanksgiving to track down dangerous saboteurs. Nancy and George are visiting a friend, whose eco-terrorist boyfriend, a major suspect in the sabotage, is missing.
At All Costs is definitely a "ripped from the headlines" story. It involves the building of a winter sports park in Utah for the 2002 Olympics.  Utah had lost the bid for the 1998 Olympics, but they went on with plans to build their Olympic venues despite opposition from citizens concerned over traffic and environmental effects.   In December 1998 allegations of a scandal involving Salt Lake Organizing Committee members, and members of the International Olympic Committee concerning the 2002 Olympic bid surfaced. This supermystery precedes the real Olympic Scandal coming to light and it is amazing to think that this author predicted this kind of drama surrounding the 2002 Olympics.
Both Frank and Joe and Nancy and George take time to go sking. The Hardy's are involved in an avalanche and must build a snow cave and wait for Ski Patrol to rescue them. Meanwhile Nancy and George are sking at a resort and their friend is forced off the slope and is dangling off the side of a cliff. The teen detectives act together to rescue the eco-terrorist boyfriend from an abandoned silver mine.
They all get together for a Thanksgiving meal.   George is depicted as always being hungry and Nancy even comments. " You're beginning to sound like Bess."  After solving all the mysteries and catching all the bad guys, "we've got an even bigger challenge -- fresh powder in the Wasatch Mountains."  Once again, the detectives were pretty much given equal amounts of action and responsibilities, so I was also happy with this super mystery.  So much to be thankful for with these super mysteries!
Posted by Amanda from Seattle at 8:45 PM