Nancy Drew and Hardy Boys Super Mystery Danger Down Under!

Nancy Drew and the Hardy Boys Super Mystery Danger Down Under : Or Whatever Happened to Mick Devlin? 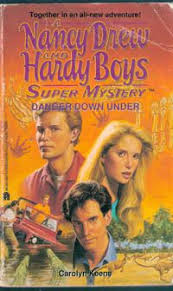 Published in 1995, Danger Down Under starts the exact same way that Paris Connection started, with Nancy Drew stuck in customs.  This time she is traveling with George instead of Bess. Mick Devlin, who has been a love interest for Nancy Drew in the past has asked her to come to Australia to help a friend of his find a missing Aborigine relic.  We learn that Frank and Joe Hardy are also in Australia, they sent a postcard to Nancy.  And so the mystery begins.
When I began to read this book, I was all excited because I was getting ready to travel to Australia.   I thought, "Oh, I will read this one and get some Down Under atmosphere to get me in the mood." Little did I know that this book would lead me to read four more Nancy Drew Case Files books!
And it is all because of Mick Devlin. Mick Devlin was first introduced in the Nancy Drew Case Files book, Swiss Secrets.  Case 72, Swiss Secrets is the first in a trilogy of books called Passport to Romance. (Gag) Mick shows up in all three of the Passport to Romance books and again in Nancy Drew Files Case 96, The Runaway Bride.   So of course, I had to read all these books which precede Danger Down Under,  so that I could give a true review to Danger Down Under and Mick Devlin.
Danger Down Under in 1995 is the last appearance of Mick Devlin that I know about, if anyone has any knowledge of another visit by Mick to the Nancy Drew world, please let me know. 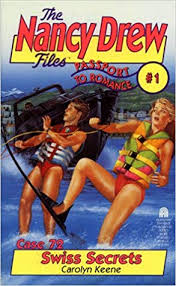 In Swiss Secrets: Case 72, we are first introduced to Mick Devlin and he is the prime suspect in the mystery. He is the son of a diplomat. His father was the Ambassador for Australia to Switzerland for most of his teens. He does not share this information with Nancy immediately and he is evasive and mysterious, so of course that is intriguing. There is also an immediate physical connection between Mick and Nancy. They share a kiss on a hike in the Swiss Alps and Mick is a tour guide for Nancy, Bess and George for much of their stay in Switzerland. His diplomatic connections help in resolving the mystery at the end of  Swiss Secrets. 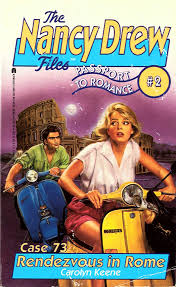 Rendezvous in Rome, Case 73,  marks the second appearance of Mick Devlin. He joins Nancy and Bess in the Eternal City and helps them solve the mystery of a rash of jewelry thefts.  But he does not show up until almost the very end of the book. Nevertheless, he and Nancy share many kisses.  Blonde, handsome, with deep green eyes, "--her heart skipped a beat every time Mick smiled" you can see how Nancy could be distracted by Mick Devlin. So it is awesome that he jumps in to help whenever he can and he lets Nancy take the lead and tell him what to do and how he can help her. 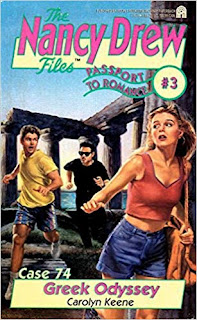 Greek Odyssey, Case 74, is the third in the Passport to Romance Trilogy. Bess's passport is stolen and Nancy Drew and the gang are thrust into a case involving terrorists! Mick Devlin asks Nancy Drew to marry him.  "She always felt so ...relaxed with Mick. It felt very natural to work out a mystery with him. " But at the end of the book, she refuses his proposal. He says that he will never forget her and that the door is always open. 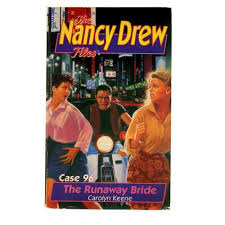 The Nancy Drew Files Case 96 The Runaway Bride, written in 1994, Runaway Bride has Nancy, Bess and George visiting Tokyo for the wedding of a friend, Midori, who was an exchange student at River Heights High School. Mick shows up because he is doing an internship at a company in Tokyo. During the course of the mystery, Mick and Nancy have to pretend to be boyfriend and girlfriend sort of undercover...of course they do! At the end of this book, Mick and Nancy promise to rendezvous every few years to solve a mystery together.

And this brings us back to Danger Down Under.  As a travelogue style book, it had lots of great Australia atmosphere, but it was heavy on the romance between Mick and Nancy and  (spoiler alert)  the Hardy Boys mystery was another where the bad guys are actually the ones who bring in the detectives and I will never understand that as a trope.  At the end of the book, Nancy admits that she misses Ned and River Heights more than anything and will be leaving Mick. Mick's final line in the book is, " You haven't seen the last of me, Nancy."

Unfortunately, this does seem to be the last of Mick Devlin. Handsome, tall, at least 6 foot three, a rangy build, broad shoulders, gorgeous, amazing, tanned, blonde with deep green eyes, these are only a few of the adjectives used to describe Mick. But it is always assumed that Nancy would have to live in Australia with Mick and leave River Heights behind. I find this logic a little flawed. I am sure that Mick could get a great job in Chicago or New York City and Nancy could continue to live in the USA. After all Mick is the son of a diplomat and used to living all over the world. But the choice is always presented as Mick or the USA. So in the end, Nancy Drew chooses the USA. (and Ned)


Posted by Amanda from Seattle at 5:53 PM